Share All sharing options for: The Casual Awards: Next Stop, NCAA Tournament

And that's that.  Georgetown's appearance in the 2011 Big East Tournament lasted a brisk two hours, though I suppose you could argue that it was only interesting for less than half that.  The Hoyas went out with a whimper yesterday against Kemba Walker and UConn, but that won't stop us from handing out hardware to those most deserving.  Away we go...

The Chris Wright Heart of a Champion Award:
Austin Freeman and Jason Clark are the only two Hoyas in contention for this one, and even though Clark finished with more points on the scoreboard, it was Freeman who kept Georgetown in this game in the first half with a casual array of drives to the hoop and mid-range jumpers.  Freeman finished with 20 points but needed 20 shots to get there, while Clark led the Hoyas with 23 on a more efficient 7-13 shooting performance from the field.  Nothing really matters anymore.

More awards after The Jump:

The End Is Near Award:
What the hell has happened to these guys?  Broken third metacarpal aside, this team has shown nothing over the past few weeks that would even convince ANYONE (hello Selection Committee!) that it is capable of winning another damn game.  Austin Freeman is still struggling mightily from long distance since rolling his ankle, Jason Clark has had his usual ups and downs, Hollis Thompson has been just OK since being forced back into the starting lineup, Nate Lubick hustles but can't deliver much else, and Julian Vaughn, CHRIST ALMIGHTY JULIAN VAUGHN.  If motivation is the issue then that falls on the coaching staff, but it's hard to believe that this group would need such prodding.  HAVE SOME FUCKING PRIDE GODDAMMIT.  Moving on...

The Proof Is In The Pudding Award:
Crack Casualhoya.com research has revealed that Austin Freeman has made 7 of 44 three pointers since hurting his ankle against Marquette.  If you're calculating at home, that's 16%.  16%!  Austin Freeman is Georgetown's best shooter and only hope to advance in the NCAA Tournament.  I will now light myself on fire.  Again.

That Ankle Must Really Hurt Award:
In spite of Freeman's DOCUMENTED shooting struggles from long distance, he is still shooting a whopping 37% from behind the arc on the season.  I'm not a mathematician or a scientist or an alien, but if he's shooting 37% on the year even though he's at a 16% clip since the Marquette game, then he was en fuego before that.  Freeman is also making 48% of his field goal attempts and 87% of his free throws.

That Boy Good Award:
Kemba Walker.  Credit where credit is due, Kemba Walker is by far the best player in the Big East and a nasty little thing to attempt to contain, nastier even than lordnick's genital rash.  28 points and 6 rebounds in a controlled and efficient performance yesterday that there was likely nothing much Georgetown could have done about...UNLESS...

The "Yes, Sensei" Award:
Goddamit how hard is it to use one of Jerrelle Benimon's knees to kick Kemba Walker in the nads?  Georgetown's only hope was to bottle up Kemba in this game and this was a massive FAIL on every level.  Even when he wasn't making shots, Walker was outrebounding our big men and was all over the place creating wide open looks for his mutant teammates.  You think Pitt isn't going to be having one of their goons deliver a well placed People's Elbow tomorrow?  You just watch.  MAN UP, HOYAS.

Document Your GameWatch Award:
At work with a very, very small TV!

What is the score?  Is that a 3 or an 8?  Hang on, could we be winning?  Did that basket go in?  We're the team in the dark-colored jerseys, right? 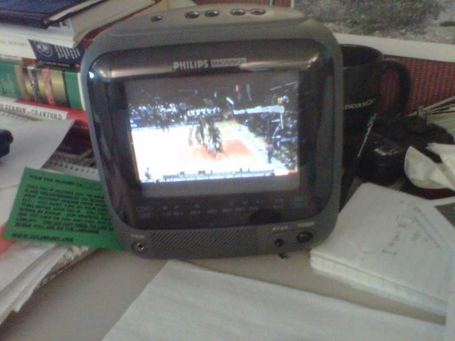 I Hope I am Not Watching the MEAC Conference

At work on ESPN3! 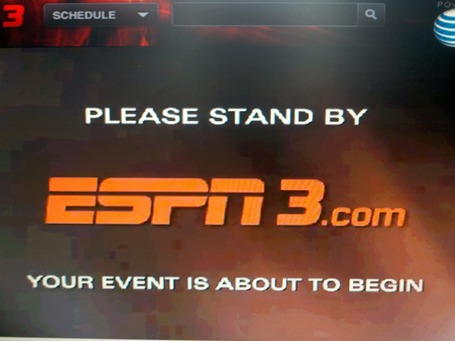 There's something very dramatic about this.

Ambiguously Gay Duo Award For Atrocious Superhero Performance:
There's no way to sugarcoat this - Henry Sims ("Regularman") and Julian Vaughn ("Swagman") ate a giant bag of dicks in that game. Hell, throw Moses Ayegba in too. Alex Oriakhi and Charles Okwandu aren't exactly the second coming of Mutombo and Mourning and our combined big man output was pathetic.

Hoya Trinity Award:
Remember those times like after the Missouri game and when the non-conference schedule concluded when we were touting Georgetown's "Big Three/Run DMV/DC3/Eat My Ass" and how unstoppable the Hoyas are when they make threes?  Well, we stopped making threes.  And those were good times.

Overmatched High School Team Award:
Back when we were in high school, we all had a team that sucked.  We'd go to games because they were social events, and we knew some players on the team, and there was nothing better to do in high school on weeknights.  Well, we're not in high school anymore, yet it still feels like we're rooting for an overmatched high school basketball team right now.  My high school once played Blair Academy, who had Charlie Villanueva and Luol Deng on the team.  Whenever we scored, it felt like a miracle.  That's how it felt yesterday watching Georgetown against UConn.  Lord, that is depressing.

Worst Day Ever to Forget Your Hairnet Award:
Mom. She called me in the basement from her job at Dairy Queen and said she forgot her hairnet and they won't let her use the Blizzard machine without it. So I had to go find it and bring it to her on the bus. This is my view as the game tipped off. 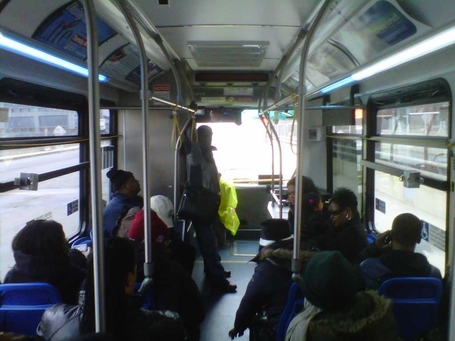 Revenge Tour 2K11 Award:
Remember how awesome Revenge Tour 2K10 was?  We beat South Florida, then Syracuse, then Marquette, before falling to West Virginia in a Big East Tournament InstaClassic. Yeah, not so much this year.

Spoiler Alert Award:
For anyone who has been paying attention to this team over the past two weeks, yesterday's game couldn't have been a shock at all.  It is unclear what Vegas was thinking when they started UConn as a 1.5 point favorite.  Completely bizarre.  That game was more predictable than a Ronny-Sammi fight after a night of drinking.

The Locker Room Award:
My guess for where Georgetown's frontcourt decided to leave its ability to play basketball.  Julian Vaughn, Henry Sims, and Nate Lubick combined for the following stats: 4 points, 8 rebounds, 10 fouls, and 8 turnovers.  I'd add Benimon to that mix but that would just give us another 4 fouls and a turnover.

In With A Roar, Out With A Whimper Award:
Georgetown's 2007 recruiting class was stocked with two McDonald's All American guards - Austin Freeman and Chris Wright. That vaunted guard duo, the one that was supposed to lead us to a National Championship, has yielded exactly ONE post season tournament victory in three years. Throughout this year, it looked like they'd at least double that total, but after Wright broke his hand, it's hard to envision them even getting one.

Quick, Somebody Come Up With A Scandal Award:
This recent slide is missing one thing - a sordid scandal. Where is the Gloria James - Delonte West type rumor? The Scottie Reynolds - Corey Fisher affair? Even the ALLEGED Scoop Jardine nonsense? Come on, someone come up with something besides Wright's injury, anything please.

What Is Old Is New Award:
A huge knock on JT3's recruiting has been that he recruits positionless players. That perception has been helped tremendously since Wright's injury. What position does Austin Freeman play? Jason Clark? Hollis Thompson? Nate Lubick?

Can't Blame Everything On One Injury Award:
Wright's third metacarpal injury has NOTHING to do with the inability to box out Kemba Walker, who is all of 6'1". Wright's third metacarpal also does not account for Georgetown's inability to box out on opposing team's free throws. It also isn't the reason the opposition's perimeter players continue to get wide open looks from three point range.

So You're Saying There's A Chance Award:
Don't look now but Jason Clark might be snapping back into game shape. Take out the poor 3 point shooting and he put together a hell of a well-rounded game.  Impressive rebounding, solid free throw shooting, and a willingness to mix it up? Maybe it's taken him a few games to understand how to play without Chris and just think how much better he can be once Wright returns. #daretodream

Jim Nantz Comments of the Game Award:
You casualties never fail to amuse.  And yes, you amuse.  Like fucking clowns:

Comes off the bus to the Garden walking with a cane.

Well, it's been fun

we need to unleash the craziness Lubick has inside him

Smack him in the huddle, tell him to break some noses and you won’t mind if he fouls out. I’ve seen that kid go head to head with bigger guys and make them back down. Establish that physicality from Lubick and the team may follow.

"All career bests vs Georgetown" - Kemba

Ugh we are really a star shooter’s dream, rolling out the red carpet to the phonebooth for anyone who wants a career night. Next year’s WAG shirt slogan, Motel-6 style:

Watching the Hoyas without Number 4 on the court

Now I really wish I could drink at work

I might have to just leave early and go immediately to a bar.

Defender of the Universe

Sweep the leg, drop the shoulder, throw the elbow...

We’ve already getting called for the fouls, might as well make ’em count.

On the bright side, we can all look forward to productive days at work tomorrow

get Wright back you’ll be fine.

Ferris Bueller Award:
The Hoyas aren't going to play until March 17th at the earliest, and I think they should just take some time off to relax.  There appears to be a fair amount of pressing going down on the court and maybe it would be best for the kids to just take a couple days to unwind.  Madden, NBA2K11, Call of Duty, Rub and Tug, whatever, just do whatever it is they need to do to come back refreshed and ready to kick some ass.

Old Balls Award/The Award for Being On Your Knees so You Can BLOW a Big East Tournament Game:
The Rutgers - St. John's refs.  This almost defies explanation, but let's try: down two, Rutgers heaves an inbounds pass halfway across the court which is, of course, picked off by a St Johns player.  Hooray Redmen!  In jubilation, this player takes four steps with the ball, goes out of bounds and tosses the ball into the stands.  WHILE THERE IS STILL TIME ON THE CLOCK!  Where are the refs? Running into the tunnel.  COME ON!  Look, I am on this St. Johns bandwagon as much as anybody and I very much hope they utterly destroy Syracuse, but that officiating was A JOKE.

Spamalot Always Look On The Bright Side of Life Award:
The Hoyas, assuming Chris Wright can indeed come back, should IN THEORY be a nasty 6 or 7 seed in the Dance.  I don't think Georgetown's seeding matters all that much since the Hoyas have shown all year that they can defeat good teams and lose to awful ones, so get Wright back, get him playing like he was pre-injury, and the Hoyas can still do some damage this month.  I honestly believe that.

The NCAA Tournament is NeXt. 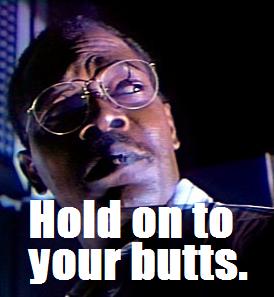