Inside Edition: How Georgetown Will Beat Syracuse

Share All sharing options for: Inside Edition: How Georgetown Will Beat Syracuse 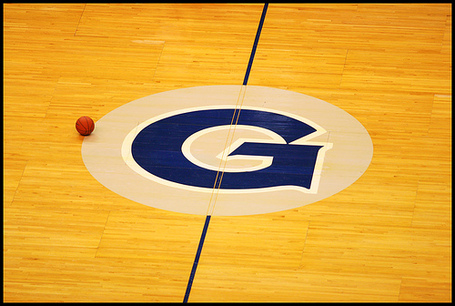 This Wednesday the Hoyas return to the Carrier Dome for an important game with Syracuse. The conventional wisdom and likelihood is that the Hoyas will lose this game for a variety of reasons:

(How Georgetown Will Win After the Jump)

Obviously, I want Georgetown to win and will watch ESPN rooting for them to do so. If that is to happen, we need to focus on one thing intensively. Play defense like we did against St. John's (in the Jan.26 game), Villanova and Louisville. The defensive intensity which was on display against Providence will not cut it. We need to hold the Orange to about 40% shooting from the floor. This is not that an impossible task. As I watched Seton Hall and Villanova beat Syracuse, it became pretty clear that the Orange lack a real "go to" offensive player to create shots and score other than Kris Joseph. Jardine and Triche are very streaky and volatile shooters who have a tough time creating their own shot against good defensive pressure. Jackson is a big body who may score off offensive rebounds but he is not creating anything. If the Georgetown team comes out focused on leaving every ounce of effort on the defensive floor, they can win. After all, this team beat Syracuse in the last six quarters of their three games last year. As much as we miss Greg Monroe, Syracuse is much weaker without Johnson, Onawaku and Rautins.

To emphasize how important the commitment to defense is let's borrow some analysis from our friends at Hoya Prospectus. 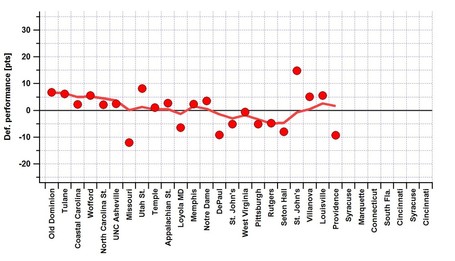 Georgetown is 12-2 when the defense out performs expectations and only 6-3 when it doesn't.

The defensive effort in the three games between Jan. 26 and 31 is absolutely necessary to win games against quality Big East opponents. Our offense is something that comes naturally to this team and, as we saw in the end of January games, it can flow off a good defense.

Now with respect to our offense, it is important to attack the Syracuse zone at its seams rather than rely too heavily on shooting over the top of the zone. Austin, Jason and Chris are just too short to shoot over those guys. Attack the seams as effectively as we did in the second half of the Verizon game against Syracuse last year and our BET victory over them. Also the guards on Nova and Theodore from the Hall did it very well. So, JT III, please show the team those tapes this week.

Other thoughts on the team so far:

In order for us to have a successful run to the end of the season, we need to continue to work on and improve our season to date performance on defense and turnovers.  We also need to improve our efficiencies in individual spots.