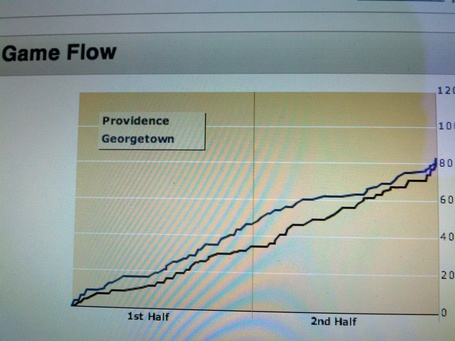 This is a graph that scientifically proves that if the game were just one minute longer the Hoyas would have lost.

The Chris Wright Heart of a Champion Award:
This is a tough one, since it was the first game in a long time that all three of The Hoya Trinity filled up the box score. Austin Freeman had 23 points, Jason Clark 18, and Chris Wright finished with 16 points, 5 assists, and that clutch steal to end the game. But the winner of this award is Julian Vaughn. Vaughn was outstanding against Providence, providing Georgetown with a reliable inside force throughout the entire game. Vaughn displayed some nifty post moves, threw down some ferocious dunks, and even though he missed 6 free throws, he made them in the final minutes when it really mattered. Thank God for Julian Vaughn.

Chris Webber Game Awareness Award:
Chris Wright. Tremendous hustle after the missed free throw on the steal, but as he came down with the loose ball, the 1972 Providence grad sitting next to me was very adamant that Wright was trying to call a time-out WHEN WE HAD NONE LEFT. For those scoring at home, that would have been a technical foul and, probably, a conference loss for the Hoyas. From this blog's perspective, time had expired so no foul should have been called. But OOF!!! Remember Wright rushing the shot in last year's Big East Championship because he thought we had no timeouts left? Hey Lumpy: let's keep an eye on the scoreboard. 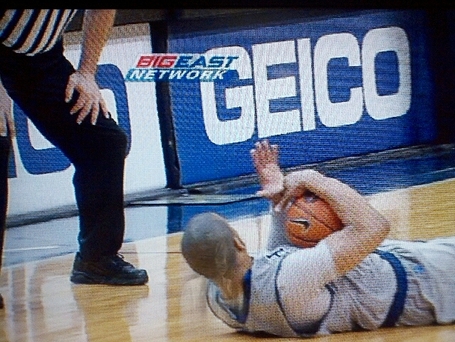 High Speed Rail "Winning the Future" Award:
The Acela Club. How have we forgotten? In an arena full of long lines and Bud Light draft, do not forget that there is a sweet escape. The ladies by the escalators check no tickets, so head to the Acela Club for Casual pre-game crowds and PREMIUM BEERS. Ahhhhh, Stella. Your deliciousness will ease my next forty minutes of misery.

The Nacho Libre Award:
The kid who sits in front of me. This guy has won the Chipotle burrito contest three times this year. But get this: HE DOESN'T LIKE BURRITOS! COME ON! There is something very wrong about using your childish cuteness to win burritos from the Cheerleaders when you don't even want to eat the burrito. And don't try to pawn it off on me. I don't want a unidentified cold burrito either. Stay in your seat kid, and let your dad bring your more chicken fingers.

The John Calipari Free Throws Win Championships Award:
Providence. If you shoot 62 percent from the line you are just going to have to deal with losing games by two points. A fundamental hallmark of a good basketball team is making free throws and if you can't do that--HOLY CRAP THE HOYAS SHOT WORSE!!! Georgetown was 56 percent from the line! Thank you Baby Jesus for somehow letting us win that game because we were sucking up a storm in that one.
Document Your Lunch Award:
Nando. Anytime you can get a wrap with a toothpick in it, you have to pull the trigger. 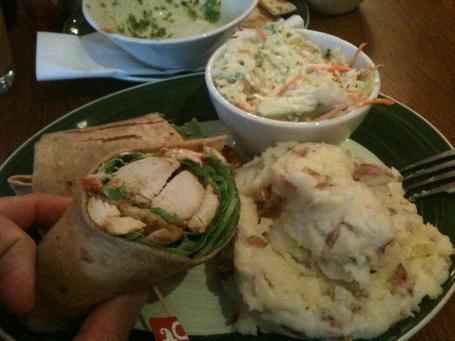 When Skiing Goes Wrong Award:
Have you ever woken up in Utah with 8 inches of fresh snow on the ground? Ski in perfect conditions for 2.5 hours? Enjoy a delicious buffet and a hot chocolate with the perfect amount of whipped cream? All of these things are phenomenal. Until someone else at the table pulls out his iPhone and says "Georgetown is up 79-77, you may want to look at this." And then my lunch was ruined watching ESPN's gamecast for the next 10 minutes. Thanks, Georgetown.

Stephen Curry Award:
Marshon Brooks. What will happen when Georgetown faces UConn in Storrs in a few weeks? Will Kemba Walker go for 50 points? Heaven forbid Georgetown draws BYU in the NCAA Tournament. Frank Selvy's 56 year old record 100 points in a game could be in jeopardy. Guard the opponent's best player, idiots!

Hand Jive Award:
Everyone loves Grease and everyone loves...the Step Team? Kudos to the kids for having the backbone to hit the court and kudos to Georgetown for displaying diversity with the only all white step team in history. Hell, at least it was better than the 'Devil Goes Down to Georgia' fiasco a few years back.

The "Help, I Need Somebody" Award:
I never want to see Marshon Brooks ever again. 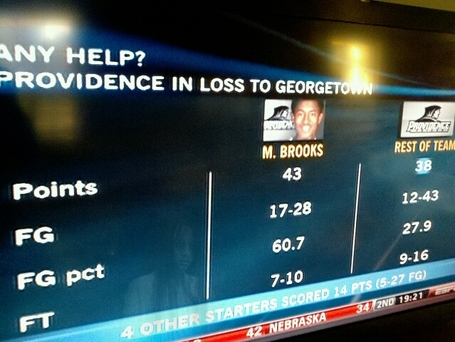 What is that on the bottom left of the screen? Is it...is that A GHOST!?!

The Baffler Award:
Named in honor of my favorite rescue club from Cobra, this one goes to Jerrelle Benimon, who for some unknown reason continues to log minutes despite horrendous play. Benimon once again amazed the Verizon crowd with 4 fouls and 2 turnovers in his 10 minutes of action, and the question of why he plays so much (just one fewer minute than Sims!) simply has no answer. He did have 3 blocks, however, though to be honest I only remember one of them.

Old Balls Award:
Duke loving aside, Dick Vitale has been a great ambassador for college basketball. Yet, when describing John Calipari during last night's Florida-Kentucky game, Vitale said, "Calipari has just done a great job everywhere he goes - UMass, Memphis, and now Kentucky." Actually, Dick, he had Final Fours vacated at UMass and Memphis, and failed spectacularly with the Nets between both gigs. Other than that, yes, great job. FAIL.

Not A Good Possession for Nate Lubick Award:
That was really fun when, with just minutes left and the Hoyas nursing a 5 point lead, Lubick missed an easy layup, got the rebound, then attempted a three pointer that wasn't even close. It was so fun that JT3 rewarded him with an immediate trip to the bench.

The Faith In Adversity Award:
Kent Adrian. Known affectionately by Hoyas fans as GlideHoya, Adrian's enthusiasm and Hoya love cannot be denied. This award, however, goes to his recap of the Providence game, because for some reason I love that he used the term "faith in adversity." 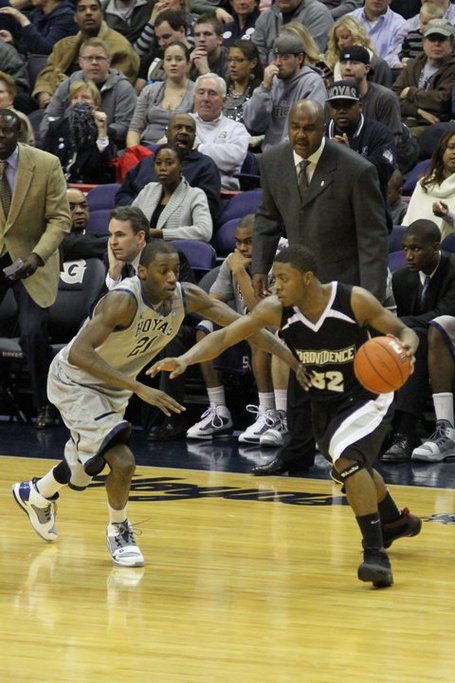 Glide Hoya is the angel on JT3's left shoulder. I'm not sure who the kid picking his nose is. via 1.bp.blogspot.com

The Trailer Park Award:
Providence center Ray Hall looks like a cross between Larry the Cable Guy and a truck driver, but that's beside the point. Even though this game was close down the stretch, the Hoyas never trailed, not even for a second. That was casual.

The NIT Is Going To Be Tough Award:
But be sure to tell us how it is, St. John's! Suckers.

The Jim Nantz Commenters of the Game Award:
You Casualties are getting good at this stuff, and once again we have numerous casual offerings for that ass:

True. I am a SHITPICKLE of the highest order.

Whoa!!! Who is this hillperson on Providence?

who is that bear on the floor?

number 55 looks like a teddy bear, at least on esp3.

cannot decide what to call The Hoya Trinity. I’ve heard the Three Amigos, the Triumvirate, and the Big Three. Get it together.

quietly having a monster game. He’s the glue that holds this team together

Can we send JTIII to a timeout refresher coaching class or something? Between the total lack of offensive sets coming out of TOs during the losing streak and his seeming inability to call a timeout until the opponents have COMPLETED a comeback (plus that awful timeout when we were rallying against SJU), JTIII may have some of the worst TO usage of any coach I’ve seen this year.

Finally got a t-shirt toss shirt.

2XL. Guess I can put on about 90 pounds and this thing will look great on me.

Did JT3 miss Brooks on the scouting report?

by RileysDressLikeAHoyaJersey on Feb 5, 2011 1:51 PM EST via mobile reply actions

I am drinking smirnoff from a dog bowl

"not often the Hoyas muff a three-on-zero"

run to the locker room..just go.