Six In A Row: Georgetown Escapes With An 83-81 Win Over Providence

Share All sharing options for: Six In A Row: Georgetown Escapes With An 83-81 Win Over Providence

The Georgetown Hoyas extended its Big East winning streak to six games today with a 83-81 win over the Providence Friars.  BARELY.  The Hoyas were paced by Austin Freeman with 23 points.  Marshon Brooks led the Friars with 43 points in a virtuoso performance for the ages. 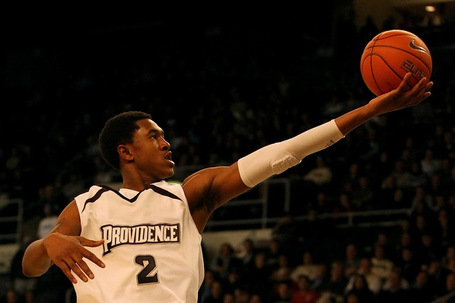 Marshon Brooks is awesome.  via d.yimg.com

In the first half, Georgetown started hot early, as Freeman, Chris Wright, and Jason Clark each connected on threes on Georgetown's first three possessions to open the scoring for the Hoyas.  Effective ball movement on the perimeter and into the post resulted in numerous wide open looks, and Georgetown opened a 17-9 lead with 13 minutes left.  The Hoyas apparently never got the memo to guard Providence's Marshon Brooks, however, who single-handedly kept the Friars in the game with a whopping 24 points in the first half on a series of drives to the hoop and outside shots.  In case that didn't resonate properly, MARSHON BROOKS SCORED 24 OF PROVIDENCE'S 34 POINTS IN THE FIRST HALF.  Stellar play by Chris Wright and a flurry of late threes by Hollis Thompson and Jason Clark gave the Hoyas a 46-34 lead at the break.

More sort of happy thoughts after The Jump:

The Hoyas scored the first six points of the second half to build an 18 point bulge, and Georgetown maintained a double digit lead for the first ten minutes until a stretch of sloppy play by the reserves allowed the Friars back into the game.  The shooting touch that propelled the Hoyas in the first half completely abandoned them in the second, and Providence closed to a two point deficit on the back of a 14-3 run over six minutes on the hot hand of Brooks and horrible free throw shooting by Georgetown.

Just as the Hoya faithful across the country began to search for household appliances with which to gouge their eyes out, Julian Vaughn began to assert himself.  A ferocious dunk was followed by a couple of nifty hookers in the lane, and two Friars turnovers that led to easy buckets for Freeman extended the lead to eight.  Jason Clark decided to keep Providence in the game, however, fouling Brooks while he made a three, and the lead was once again cut to four with two minutes to play.  The stage was set for a wild and tense finish that never should have happened in the first place.

Every time the Hoyas were on the cusp of putting the game away, the Friars came right back.  A ridiculous circus shot for a three point play by Duke Mondy cut the lead to 3 with a minute to play.  After two Freeman free throws, a Friars three cut the lead to 2, and after a layup by Brooks sandwiched in between 2 made free throws by Wright (and 2 misses), the stage was set for Brooks to deliver his final dagger.  However, that dagger never came as Wright stole the ball from Brooks at midcourt with just seconds to play, sealing the win.  Wright appeared to signal for a timeout after the steal, but the ref didn't see it, which was nice because the Hoyas didn't have any timeouts left and that would have been a disaster.

The story of this game was Marshon Brooks, and more importantly Georgetown's inability to stop him.  After his 24 point first half I was convinced that JT3 would come up with a way to get a hand in Brooks' face for the rest of the game, but that wasn't the case.  Too often this season the Hoyas have allowed an opponent to go off against them, and today it nearly resulted in a loss.  The last time I recall an opponent gash the Hoyas as proficiently as Brooks did was JJ Redick on that fateful day against Duke in 2006.  Interestingly, that game ended similarly, as after a Jon Wallace missed free throw Redick never got his chance to attempt a game winner after Brandon Bowman stole the ball from him with just seconds to play.  THANK GOD.

This first half of this game marked a welcome return for two aspects of Georgetown's game that had been missing of late, 1) holding onto the ball and 2) proficiency from outside.  Georgetown turned the ball over only three times in the first half (only 9 turnovers in the game).  In addition, the Hoyas connected on 8 of 15 three pointers in the first half, but went an awful 0 for 11 from three in the second half.  The inconsistency of the offense was on full display in the second half, and only late heroics by the seniors Freeman, Wright, and Vaughn put this one in the win column.

But at the end of the day a win is a win.  And while the Hoyas certainly have a lot of work to do before getting their first look at Syracuse's vaunted 2-3 zone Wednesday night, that 7-4 record in Big East play after the 1-4 start is looking mighty fine.

Enjoy the rest of your Saturday.