The Casual Awards: We Are Georgetown

Share All sharing options for: The Casual Awards: We Are Georgetown

Saturday was really really really awesome. Though the outcome of the game no doubt was disappointing, the energy in Verizon was electric, the crowd was great, and the team played hard and left it all on the floor. Quite a difference from the Fiesta de Suck against Cincinnati just days earlier. As always we here at THE GLOBAL PHENOMENON are handing out hardware to those most deserving. Away we go.

James Franco Award:
Fab Melo. Turning the show over to the youth was supposed to work wonders but instead, Oscars watchers saw a clearly stoned James Franco mailing it in through the seemingly endless show. In related news, Fab appears to be eating 3 pizzas a night and barely moves up and down the floor - there's no telling what made people think this kid could play but this will probably go down as one of Boeheim's (and the Academy's) biggest whiffs of all time.

Street Fighter Award:
This award goes to the two women, one in gray and one in orange, who threw down outside the Iron Horse in front of the Eat Wonky truck. Superb effort by both of you. Most Syracuse fans I encountered Saturday couldn't have been nicer, so it was nice to have order restored with two females on opposite sides exchanging shoves and fists.

Asher Roth I Love College Award:
Drinking all day is really exhausting, hats off to college kids who do this every weekend. To all of those who spent Saturday boozing harder than you have in years, now nursing sore throats and runny noses, this Theraflu is for you.

Definition of Insanity Award:
Scoring is much easier when the defense doesn't have a chance to set up. John Thompson III still hasn't seemed to grasp this just yet. Down three with 30 seconds left, Clark running with the ball on a 5 on 4 with Freeman looking at an open three, JT3 decided to call timeout. No. No, no, no. What happened next? We ran some crappy play, Clark got stuffed, game ended. Or so it seemed from my seats in the 7000s section.

The Night at the Roxbury Award:
As Doug and Steve Butabi are well aware, not just anyone could get into the Casual Extravaganza. Even high level administration officials were deterred by the lines. Shockingly, there were even girls at the party (Bud Light girls, hello!) but thankfully, the Iron Horse opened its lower floor to make most of us feel we were back in our mothers' basements.

Reggie Miller Award:
Nate Lubick. The shooter's mantra is 'shoot when you're hot, shoot till you get hot' but it's time for reality - there is no way to justify Lubick taking 2 of his 5 shots from 3 point range. Clearly Coach Thompson sees something that the rest of the gym can't but this is a lesson in futility and while we admire the fortitude, reality needs to take precedence.

The Kids Are Alright Award:
Markel Starks and Nate Lubick. Although we need Nate to stop chucking, both he and Markel clearly show that there's something in the tank for Hoyas fans to cheer going forward. Coach Thompson wasn't particularly complimentary of Markel post game but the kid played 24 minutes and didn't turn the ball over and should be a solid point guard.

Christian Bale Award:
Chris Wright. We all knew it was true but Wright plays the key supporting role to Freeman and yesterday's game clearly demonstrated it. From a stagnant zone attack (simply tossing the ball back and forth on one side really doesn't force much of a shift) to Scoop Jardine going off, Wright certainly would have made a difference in this game. That said, it's a good thing that the coaching and training staff held him out of the game in anticipation for the NCAA.

King's Speech Award:
Coach Thompson III. How is it possible that the Hoyas NEVER score coming off of timeouts? Best we can guess, Coach Thompson falls into the stuttering routine seen at the beginning of this movie. I suppose that sending Clark to the corner for a three could have been effective but his rigidity to not pump fake turned the play into a debacle as Kris Joseph made the block.

Hoyasincebirth Positivity Award:
Julian Vaughn. I'll save the suspense because HSB will undoubtedly note that Julian made 75% of his free throws, grabbed 7 rebounds, and blocked 3 shots! But 0-3 from the floor and giving up 12 points to Rick Jackson (whom he nearly completely shut down at Syracuse)? Julian - we've been in your corner for the entire season but you need to snap out of this funk because the team cannot win without you playing at a high level. 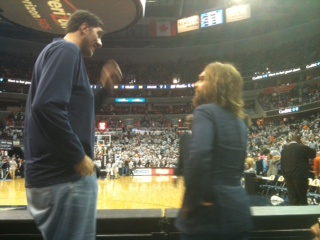 Unclear what these two were talking about

Numerology Award:
In the last two games Georgetown's opponent has scored EXACTLY and PRECISELY 58 points. I think that is interesting.

Charlie Sheen Award For Greatest Living American:
Charlie Sheen. There is no finer entertainment in all the world. Check out his exclusive Today Show interview this morning - playa even drops Allen Iverson "practice" knowledge.

You Like Us, You Really Really Like Us Award:
In honor of Sally Field's memorable Oscar speech, this one goes to the hundreds of brave souls who waited on lines as long as an hour to get into the Casual Exravaganza. What is wrong with you people.

Ooh That Would Have Been Quite Something Award:
It would have been awesome if Chris Wright started the game and was taken out right after the tip to thunderous applause. 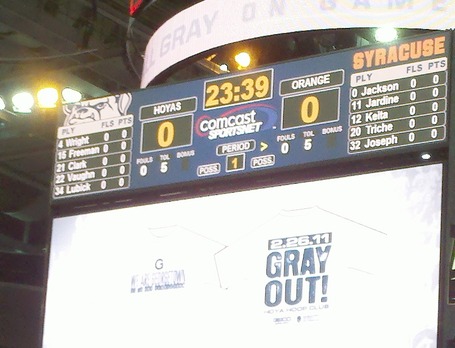 Alas, the intern who put this lineup up on the scoreboard was likely canned.

Old Balls Award:
The Bottoms Up beer stand. The bottoms up beer innovation is awesome, no doubt. But it makes no difference if those cups fill up at light speed when the person putting the cups on the crazy contraption is SLOW AS MOLASSES. The line was longer at the bottoms up stand than at the usual one, so I opted for the traditional pour for the numerous nice beers throughout the game (until the 15 minute mark in the 2nd half, of course).

Older Balls Award:
US Airways sucks so bad that is almost beyond comprehension. My flight to DC included two separate deplaning episodes due to two separate mechanical issues on top of some mutanous delay because the wind was blowing in DC. 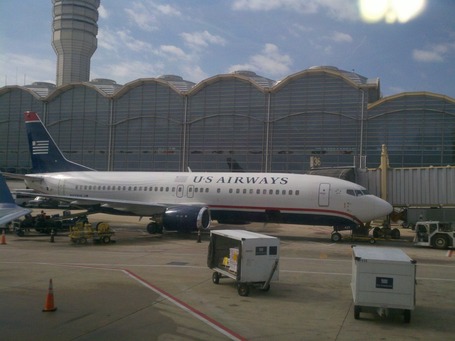 Whatever, I guess I should be happy I made it to the game and didn't wind up in the Potomac.

Jim Nantz Comments of the Game Award:
The gamethread was less active than usual as numerous Casualties were at the game and it was too tense and crazed to think straight let alone post comments, but the below are just some of the casual offerings by those warriors who were holding it down:

Passing to the other team is hurting our chances

In the 2nd half we should stop doing that.

The officials cant fuck with clear eyes and full hearts!!!

by RileysDressLikeAHoyaJersey on Feb 26, 2011 1:31 PM EST via mobile reply actions

This is the best day of my life

I can feel the emotion

and fabulous melo turns it over again

losing to syracuse is worse than having my nuts cut off, roasted, and fed to me

I want to drink household cleaner

Got into it with a Cuse fan at the game.

I was getting a beer and as I turned around the punk fuck bumped into me, spilling the beer. I said a few choice words, mentioned I liked his hair piece, also mentioned he may not recognize his Mom the next time he sees her (since she had her back shaved), and went my merry way. All in all, I felt good about it.

Now to the game. Ugh! What a disappointment! I thought they played really strong throughout the second half, but they just couldn’t get it done. I think Lubick should have taken more shots, he was way too tentative with the ball. But other than that, we played really well, just not well enough.

I can honestly say I don’t mind losing to a team with fans that have class. Take Duke for example. If we play a competitive game amongst gentlemen and lose, well so be it. I’ll shake your hand and we can part ways. These hoodlums from Syracuse define human filth. Like clockwork, every time Scoop Jardine would make a shot or Rick Jackson would block one, this hick in front of me would jump to his feet in pure euphoria. I brought my 72 year old mother to the game, and she feels like she didn’t see half of it. Taking disrespect to a new level, when she asked him politely to sit, he turned around and sarcastically said "excuse ME sir!" We have a paralegal that works at my firm that went to Syracuse and I’m seriously thinking about firing him on Monday. Then again, somebody needs to get me my lunch.

No team SUcks more than SU

Picked a Great Time to Crap The Bed Award:
Hollis Thompson. Frustrating performance from Hollis, who missed a lot of assignments on the defensive end and didn't make a single shot from the floor. With Wright out Georgetown is going to need all of the other guys to step up and in Hollis' return to the starting lineup he didn't do diddly poo.

Something Is Rotten In The State of Jason Clark Award:
Jason Clark. Come on, man. SNAP OUT OF IT.

The Award for What Actually Does Matter:
The NCAA Tournament. We are in. All that matters now is seeding, and following our loss to Cincy on the road on Saturday (reality bites) and our first round loss in the Big East Tournament to the unstoppable St. Johns, expect Your Hoyas to fall well below the three-line where they are relaxing now. FINE. IT DOESN'T MATTER. What does matter is Chris Wright coming back and The Hoyas, for the first time in like forever, wining MORE THAN ONE POST-SEASON GAME. Dear baby Jesus, please put Jimmer Fredette in a different regional.

We Should Probably Have More Awards But The Weekend Was Too Epic And The Casual Extravaganza Was Too Great And We Are All Too Hungover To Think On A Monday Morning Award:
Casualhoya.com. 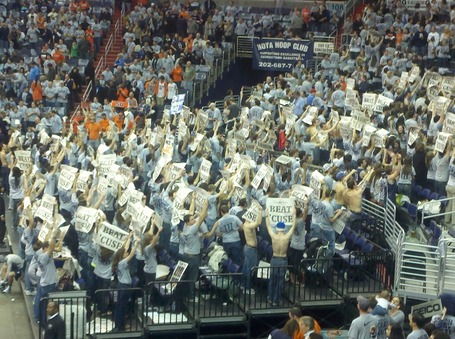