Games That Matter: Syracuse at Georgetown

Share All sharing options for: Games That Matter: Syracuse at Georgetown

This is a NYHoya joint: 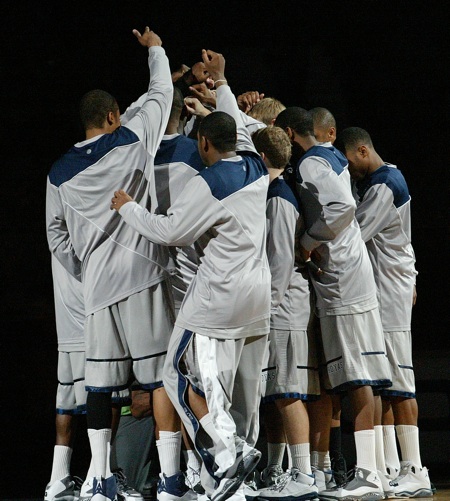 This one matters more than most.  via www.princetonbasketball.com

Chris Wright Breaks His Hand, Our Hearts – Georgetown’s Season on the Brink

This was supposed to be a nice little win in advance of a rivalry game against Syracuse.  It wasn’t.  It was the opposite of that.  We fell behind early in the first half, were severely outplayed in the second half, and then, just as it looked like things couldn’t get any worse, Chris Wright broke his hand.  There isn’t very much for me to say that hasn’t already been said.  Normally I am angry after Georgetown loses.  On Wednesday night (and Thursday), I was just sad.  Sad for Chris Wright being unable to lace up on Senior Day or for the Big East Tourney; and sad for all of us, because now we can’t look forward to watching Chris play.  The result against Cincy was not only the most poorly played game of the JTIII era, it was probably also the most depressing game I’ve seen.  (Or maybe it was the 4-OT loss to Notre Dame?  I can’t decide.  They were both terrible.)

Analysis after The Jump:

Here are some other thoughts on Wednesday’s disgusting, terrible, ugly and miserable loss:

Why You Should Go to the Game on Saturday

How to Support Chris Wright

Wear a cast to the game.  Raise your cast in solidarity with our point guard.  Hold up signs that say "We all have broken hands."  And cheer your ass off when he jogs out to center court to hug his parents.

Senior Day at the Phone Booth against our biggest rival.  Definitely the biggest celebration of seniors since 2008 (Hibbert, Ewing Jr, Wallace, Crawford) when the crowd willed the Hoyas to a narrow win over Louisville and a second consecutive Big East regular season title.

Syracuse comes into this game rejuvenated, coming off a narrow win over Rutgers and a solid road victory at ‘Nova, plus an entire week to rest and prepare.  The Orange will be looking for payback against a Georgetown team that defeated them at the Dome this year for the first time since 2002.  They will be hungry, but so will the Hoyas.

Our victory against Syracuse a few weeks ago was the high point of the season.  We displayed poise, balance and just enough fire to embarrass the Orange in their gym.  In that game, Julian had 12 points and 8 boards and outplayed Rick Jackson in the middle.  Hollis chipped in with 11 points, including three gigantic threes at the most crucial times.  And Chris Wright did a little of everything – six points, five boards and NINE ASSISTS.  He worked his way into the middle of that 2-3 zone and moved the ball around to guys who could make shots.  We won the game for, basically, two reasons: we took away the paint and we successfully used a combination of players to get into the middle of the Orange zone.  These two things will definitely be a lot tougher on Saturday.

Keys to the Game:

Last time we played Syracuse, the Hoyas  were determined to make a statement – that they were one of the elite teams in the conference.  This time around, the mood will be a bit more somber, but the intensity won’t change one bit.  It’s still Georgetown and Syracuse.  And we’re both still competing for double byes in the BET.  And yeah, we won’t have Chris.  And sure, it’s gonna be much more difficult for us to win this game.  But on Saturday afternoon, after Georgetown bids farewell to three of its stars, it ain’t gonna be that easy for Syracuse either.

Chris Wright’s hand may be broken, but this team’s will isn’t dead just yet.