The Casual Awards: Tough Night But Time to Push Forward

Share All sharing options for: The Casual Awards: Tough Night But Time to Push Forward

The show must go on, and it will.  Last night was horrible on many levels, but we're still handing out awards to those most deserving.  Away we go.

The Chris Wright Heart of a Champion Award:
Last year we dedicated this Award in Wright's name and this morning we couldn't be prouder.  Though he often lived up to his Wrecking Ball moniker, Wright's leadership, toughness and heart could never be questioned.  Last night Wright earned this award once again, returning to the court after BREAKING HIS HAND in an effort to help his teammates win a game.  There's not much more we can say about Wright here that hasn't been said in the outpouring of support for him in the numerous comments last night.  On behalf of Hoya fans everywhere, thank you.  Excited to see you back on the court in March.

Dark Side of the Moon Award:
Well, I guess it can't get much worse than last night, right?  Wright injury aside (and yes, it's tough to put that aside), the Hoyas were absolutely atrocious against the Bearcats.  25% from the field, 12 turnovers, outrebounded, outhustled, outmuscled, out-everything.  The optimist in me says it was an anomaly.  The pessimist in me says Oh, Shit.

Silver Lining Award:
Austin Freeman looks to be healthy, and rocked the first half with fifteen out of Georgetown's 26 points.  Georgetown is clearly going to need a healthy Freeman now more than ever, so it's good to see #15 back in ball.

Come on, Jason Clark It's Time For You To Step Up Award:
Jason Clark.  Clark has been the single most frustrating Hoya this season, showing signs of stardom in games like at Missouri yet too often fading into the background as if he's not even on the court in others.  Clark is one of those players who, if his shot isn't falling, with defer to his teammates and simply stop shooting.  With Wright out for an extended period of time, the Hoyas are going nowhere fast if Clark continues to play this way.  Clark is probably the key to Georgetown's success for the rest of the season.  And if that's scary, it should be.

Live and Die by the Three in the Paint Award:
How does Georgetown beat Cuse on Saturday?  Through Julian Vaughn.  Vaughn had the worst shooting day of his career against Cincy.  It won't happen again.  He needs to outplay Rick Jackson like he did at the Carrier Dome. 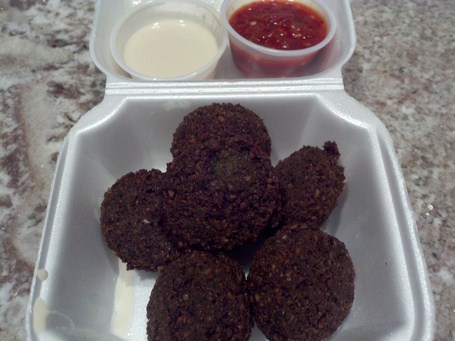 Worst Start Time Award:
9pm. Ugh. So late. 11am was a bit weird too, but 9pm is just miserable. What time was it when we got out of that game? 1am? I am exhausted. Oh, and we lost both of these poorly scheduled games.  Thank you, Ted Leonsis.

Kobe Bryant Award:
Marshon Brooks. Do you know what happened in Providence last night? Marshon Brooks scored 52 freaking points! That guy is ridiculous. It's just a shame that the rest of the Friars are apparently handicapped.

All Of The Lights Award:
Unclear. As a team and fanbase, we have until the next practice to lament the loss of Chris Wright. But as soon as that practice begins, the spotlight shifts from Wright and to his replacement.  Can Markel run the team?

Hoyasincebirth Outlandish Positivity Award:
We shot 85% from the free throw line! 75% of our fieldgoals came off of assists!

GQ Award:
Mick Cronin. Some will mock Coach Cronin for eschewing the tie. But we here at the GLOBAL PHENOMENON support casual lifestyles and business casual counts. It's never made any sense why coaches wear the full suits during the game anyway.

Georgetown Basketball Award For Awful Performance When Cincinnati Visits Verizon:
MASN. We have a variety of this award for EVERY game broadcast on MASN. Ranging from incompetent announcers to an inability to get an HD feed, how the hell does this network stay on the air?

How Not to Start a Second Half Award:
Your Georgetown Hoyas. For the first 8 minutes and one second of the second half the Hoyas were out-scored 14-2. Pathetic. It may have been worse but I had to go the bathroom and bang my head against the urinal at the TV timeout.

Dunk Contest Winner Award:
Blake Griffin!  What better way to avoid watching that awful Hoyas game then to watch The Poster Child in action against the Hornets!  Official dunk count last night was at 3. 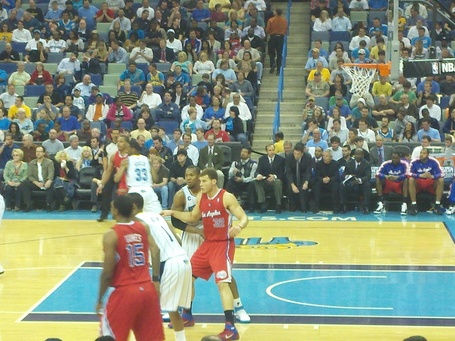 Griffin posting David West.  Good god!  Is that former Providence star Ryan Gomes in the foreground?  It is! 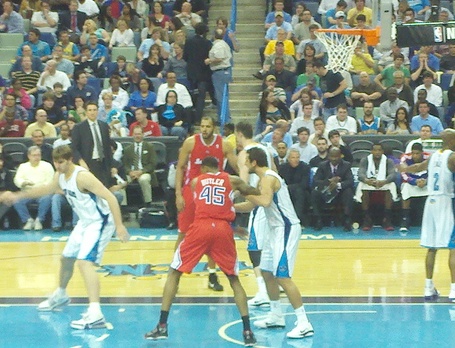 NBA patron saint RASUAL Butler.  Good god!  Is that former Pitt gimpwad Aaron Gray on the left?  It is! 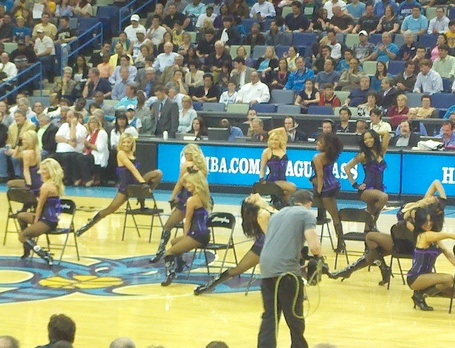 Old Balls Award:
How could the judges on American idol send that Chris Medina kid home?!?  Look, I appreciate J-Lo's tearful breakdown as much as the next guy, but why do that to the kid?  For those not watching the show, and if you aren't YOU'RE A FOOL, Medina's a casual dude with good pipes who proposed to his girl only to have her get in an accident which has rendered her paralyzed and with some sort of brain damage.  Medina decided to stick with her and dedicate the rest of his life to her.  He gets through to Hollywood, delivers a couple of steller performances, and then when it's time to advance, J-Lo rips his heart out and takes a dump on it.  She did it nicely, though, and then spent the last five minutes of the show crying as Steven Tyler and Randy Jackson consoled her.  Did the producers think they had to bounce Medina now because there was no way America would ever vote a kid with a backstory like that off?  Maybe.

Jim Nantz Comments of the Game Award:
Numerous casual offerings once again in the 600+ comments, though I will say this.  We shouldn't be killing our players for having a random off-night.  We are better than that.  We are not Syracuse.

this thread is already delightful and my cable is working for once. I would say I have a good feeling about tonight but that would be a dumbass thing to do. instead, I’m going to go prepare my shots for the benimon drinking game and watch the video of hollis rapping again.

by RileysDressLikeAHoyaJersey on Feb 23, 2011 9:25 PM EST via mobile reply actions

another one of those scratch and clawers.

i wonder what it’s like to be comfortably up ahead at the half. cant even fathom it.

too many casual passes...its a damn shitshow

This is the shittiest shit game I’ve ever seen shat. They’re forgetting how to pass and rebound. Or hold on to the ball.

Chris is fucking done, Fuck Us and our tourney hopes

We're so fucked against Cuse

I feel soooo sad that you & your orange clad kinfolk can't get tickets to our home game.....

Wrights hand is more broken than my dreams

by RileysDressLikeAHoyaJersey on Feb 23, 2011 10:26 PM EST via mobile reply actions

Fucking great. THis is all we need

Even when he’s playing against someone else, he manages to continue torching us.

Man enough to say I just shed a tear for Chris

Absolutely gutted by this news. The kid plays as hard as anybody who has worn the blue and gray. I am completely crushed.

I just voted for the Feiman/Sims card.

Welcome to the NCAA Tournament Award:
Cincinnati. Nice road win for the Bearcats which should probably put them into the tournament where I hope they get hit by a bus in the parking lot.

The Fair Trade Award:
If at 10am on Sunday you tell me I can trade a win against Syracuse on Saturday for a win Wednesday against Cincinnati, I'd tell you to go soak your head. I will gladly take a miserable Wednesday night in exchange for a Saturday of glory.

Great Name Award:
Cincinnati's Cashmere Wright.  If I have a son I am definitely naming him Cashmere Casual.  In fact, that might work for a girl, too.