Sleeping With The Orange! Interview With Former Syracuse Mascot

Share All sharing options for: Sleeping With The Orange! Interview With Former Syracuse Mascot 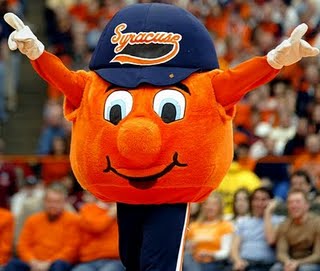 I am an Orange!  via 1.bp.blogspot.com

Who the hell are you?  Why in God's name did you go to Syracuse?  How did you become the mascot?

I was a Texas boy who somehow ended up in upstate New York for college. I fell in love with the school and made the most of my college experience (1988-1992). On a whim -- and partial dare -- I tried out for Otto the Orange and was named to the squad ('90 to '92).  There were 6 Ottos and we supported all sports and and local community events. At the dismay of all my Syracuse friends, I attended Georgetown for my MBA and graduated in 2005. I then became a season ticket holder for Georgetown basketball.

More with The Orange after The Jump:

Stanford has an outlandish tryout to become the Tree and people have been known to light themselves on fire and do other ridiculous things. Talk to us about the gauntlet you went through to become the Orange.

It's been a few years, but I recall that I had to do a cheer and I choreographed a dance routine. I recall tripping while I was in my tryout and everyone thought it was funny. Truth be told I literally tripped. You can only see out in front of you and I had to wear these big floppy shoes.

From your unique point of view, describe the experience of playing in front of a stadium packed with 34,000 of the most annoying fans in the Big East.

The Carrier Dome is an amazing place for a basketball game. Fans go crazy and for the most part, everyone loves the Syracuse mascot. Kids would come up and ask for "my" autograph, families would take pictures with you (why would I smile -- no one can see my face), etc. It was pretty amazing.

You were The Orange during some golden times in the Big East. Who was the best player you saw play? What was the best game?

To Syracuse's credit, there were too many great players to name, across basketball and football. The Georgetown-Syracuse games were always a blast -- a lot of emotion, energy, everyone was fired up. We also traveled to the NCAA tourney and to Bowl Games. My favorite game though was at Boston College. An older women who was blind wanted to "meet" the Orange and take her picture with me. She was really nice.

The Georgetown - Syracuse rivalry is the best in college basketball.  As the mascot for Syracuse, how did you prepare for those games in particular? Was there anything different about them?

It actually depended on whether it was a home or an away game. I became friends with Jack the Bulldog (the mascot, not dog) and we would talk through some skits. On my home turf, he let me win, and on his turf, he always won. I will say that I would grab my costume nose a lot during the Georgetown games, and the costume nose was, well, figure it out...

Never. I don't think he thought much of Otto. The inside of the costume smelled like poop, because of the sweating, etc. I would not have noticed if someone had pooped in the costume...

The Spectrum was a so-so venue. My favorite was probably Madison Square Garden playing St. John's. That was awesome.

What are you overall thoughts of having an Orange as a mascot? It certainly isn't very intimidating. In fact, it looks refreshing, like something a mom would give a child after a soccer match on a cool autumn day.

I loved being the mascot. It was just concerning that when I graduated from Syracuse, my "work" experience was suited for a Fruit Of The Loom commercial and a cast out from Disney. It was a great college memory, especially when I was beaten up and escorted out of the Penn State football game. There is no reason that place should be called Happy Valley...

I was walking down the field for halftime and the student section started chanting "we want the orange" "we want the orange". So I did a few gestures and they got really fired up. One of the Penn State cheerleaders walked over and said that the students want to pass me to top and then back down. I said no way. He got on the microphone and got the students into a frenzy. I finally agreed. I started at the bottom and they started passing me up. I got about 8 rows up and someone ripped off the head of the costume, stole my shoe, and starting taking my pants down. They then dropped me on the bleacher. I was ticked so I started swinging to try and get out of their. Security had to escort me to the locker room. As I was walking down the tunnel, I bumped into a football buddy of mine and he looked at me and said, "And I thought WE were getting our a--- beat out there -- look at you, our mascot is worse." It was pretty funny.

Talk to us about the Cuse groupies - did you ever get a pump out of wearing that costume?

Not specifically, but I did have a cute coed ask to meet me out on Marshall Street after a game. Her judgment concerned me though.

Did the costume come with earplugs to drown out Jim Boeheim's whining?

Earplugs still would have not worked...

Isn't Syracuse UTTERLY PATHETIC for changing their mascot from the proud Orangemen to the fruity Orange?

Not at all. The Orange was not really the official mascot until the early 1990's. Orangemen, as the original mascot, was not culturally sensitive, which is one reason why the mascot morphed into the Orange, meaning literally an orange.

Is it fair to say that anyone who dislikes pulp in their orange juice is unamerican?

It sounds to me that you are orange intolerant.

Did you ever hang out with the other mascots? Is there a common bond among college mascots, a social network or some sort? If you see college mascot on someone's resume, would you hire them immediately?

Actually we did hang out and there's definitely a bond. Of course mascot on the resume would pop off the page. I would know the person has a good sense of humor.

We would hang out during cheerleading camp and sometimes after games. I remember the guy who was Jack The Bulldog, took us out in Georgetown after one game. We had a blast. We swapped a few stories and compared notes to see who had the stinkiest costume.

In your opinion, what is the best mascot in college basketball? In the Big East?

Florida State is pretty awesome. I liked how he would ride a horse to the center of the field and thrown down the flaming spear. We were warned to not even get close to the spear, or our life might be in danger. I chuckled when I was told that, until I looked at the person again and he was dead serious. I like Seton Hall and UConn, and of course Syracuse and Georgetown.

Have you ever said anything to a referee, perhaps after a bad call? Was this practice shunned upon?

We were specifically told not to say anything to anyone. Actually, it's bad form to talk when you are in costume.

What is the best thing you have overheard on the court, either from a player, coach or ref?

I heard a ref once tell the other ref who he thought was our best looking cheerleader. I was always in the crowd so I only heard screaming fans and children wanting autographs.