Sleeping With The Enemy: The Bearcats of Cincinnati

Share All sharing options for: Sleeping With The Enemy: The Bearcats of Cincinnati 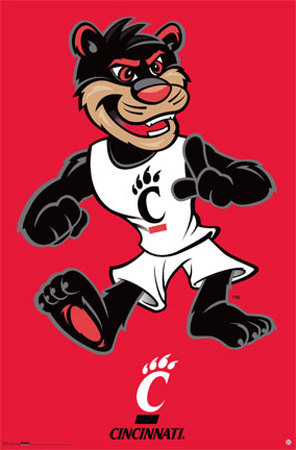 In an outright startling statement, Larry Bird said that he is still "bullish" on BORN READY. You know, the guy who threw his girlfriend down the stairs, was accused by an "escort" of not footing the bill, and hasn't logged a minute in the NBA? I'm sure you're not sorry to have seen him move on but looking back, what two word nickname is most appropriate in place of BORN READY?

Born Immature would seem to be the most logical choice. But looking back on all the decisions he has made since entering the spotlight back in Brooklyn at 14 Born Dumb is an equally strong candidate. He is clearly an immensely talented individual who can do just about anything he wants to do on the Basketball court. The talent has never been questioned, but his application of those talents has been lacking.

Should Pete Rose be in the Hall of Fame?

To me yes. It should be noted that I don't care about baseball, not in the slightest, but as anyone who has lived in Cincinnati for more than a year can attest this is an issue that you are forced to have an opinion on. To me the Hall of Fame of any sport shouldn't be about morality, it is about a person's ability to play the game at the highest level. By that Criteria Rose should be in.

Talk to us a little bit about the Cincinnati Chili phenomenon. I love chili and I love spaghetti and I'm sure I'd love them together but it really doesn't seem like anything that special. 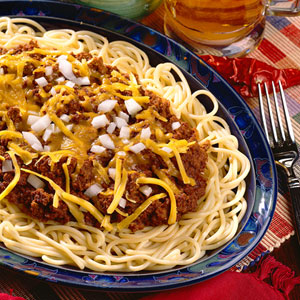 What's the big deal?  via img4.myrecipes.com

I hate Cincinnati Chili. The only time I have ever enjoyed skyline was at the conclusion of a Case Race. As a general rule if a food requires its eater to be hammered, not just drunk but hammered to be enjoyed its just not that good. My stance on Cincinnati Chili is one of several things that make me different than native born Cincinnatians.

Everyone wants to blow the Cincinnati-Xavier rivalry into the next Duke-UNC. Unfortunately, it really seems like a nice regional battle rather than a national story. How bad is the blood between the two teams and why should the rest of the country care about the game?

It's not Duke-UNC, not by a long shot. That is still the rivalry that defines College Basketball to many people, including me. But the Crosstown Shootout is a very good rivalry, and a very unique rivalry in that it divides a city of 2 million people pretty cleanly down the middle. Like the Rose issue this is something that anyone living in Cincinnati has to take a stance on, one way or the other. There aren't many, if any neutrals. The person who roots for both Cincinnati and Xavier is very rare, and likely very old as well. I think the reason this rivalry is interesting to outsiders is just how localized it is, there are very few things like it in college sports.

As for the blood it is pretty bad between the fan bases, the Little Brother Complex that Xavier fans have with UC is intense and all consuming. They have had a more consistent program for the last decade, and they are obnoxious about reminding UC fans of this constantly. But they take it to far and that is what pisses the UC fans off. For example there is a strong sentiment among Xavier fans that the A-10 is a better, tougher, more complete league from year to year than the Big East and by extension the fact that X wins the A-10 all the time and UC has yet to win the Big East means that Xavier is better than Cincinnati. Not even joking. So any UC fan who has to deal with X fans grows tired of explaining why the Big East is miles beyond the A-10, That UC really owns the city, that UC has more National Championships, Final Fours, Elite Eights Sweet 16 appearances, more All Americans, more national Players of the Year, more Hall of Famers. Basically by any historical metric UC is the superior program, and always has been. But Xavier fans don't acknowledge anything that happened before 1990 which is part of the problem. If you can sense the exasperation I feel towards Xavier reading this then you get how most UC fans feel about this rivalry year round.

Will Yancy Gates ever get it? The guy has an NBA body and displays skills on occasion but appears to be wholly tuned out from hoops at times. What team rule did he violate to get the suspension?

Yancy Gates will get it at some point. He is so talented that he will be given ample opportunities to, here at UC or in the NBA. I don't know that he will ever put it all together at the same time at UC. I have basically stopped waiting and wishing for that to happen. I want it to happen while he is here because he could be a tremendous force for this team on the inside. But I have checkout out on Gates. I don't have the same kind of emotional investment in him that I did when he stepped on campus.

Oscar Robertson is clearly the best player in Cincinnati history but who rounds out the Top 5? I'm guessing Kenyon Martin makes the cut - does Nick the Quick?

My top five would be Oscar Robertson, Steve Logan, Kenyon Martin, Jack Twyman and Danny Fortson. If you want an actual team I would probably swap out Fortson for Van Exel.

Though there have been some bumps in the road, Mick Cronin seems to have done a pretty good job in his years on the job. Is the fanbase happy with him?

I am more or less happy with him, but he is still a polarizing figure among UC fans. For the most part people check into three different camps. 1) There are quite a few people who still haven't gotten past the Bob Huggins incident. Unfortunately those people are those who speak the loudest, either in terms of actually talking shit about Cronin or with their wallets. There are still quite a few big donors who haven't come back to the program even though all relevant parties have since departed from the University. They are fond of saying that Cronin only got the job because he stabbed Bob Huggins in the back, which is bullshit by the way. They also actively root for the program to fail. If it wasn't for money no one would like these people. 2) There are the people who think Mick Cronin is the devil incarnate and hate everything that he does. These are the people that can't give Cronin his due for slogging it out in a very bad situation. They are fond of saying that he is to blame for every bad thing in the course of a game, they are also massive fans of giving the players all the credit for anything good happening. These people populate a lot of the various UC message boards. 3) Then there are the sober rationalists. The people who understand just how desperate a situation Cronin inherited and have managed to put aside whatever bias's or preferences they had and let him do his work. These people are rather difficult to find.

Should Cincy be in the NCAA Tournament?

Yes, I fully acknowledge that the non conference schedule has been shit outside of Xavier. But when it comes to the at large pool how many teams have better wins than @St. John's, Xavier and Louisville? This is an NCAA tournament team in my mind and splitting down the stretch with entrench the Bearcats in the field. Hell even 1-3 down the stretch might just do it.

This one is a Hoyas lean IMO. I think this UC team is capable of pulling of the upset on the road, but it will take a full 40 minutes of effort to do it, which is something UC has struggled to muster on the road this year. They can play 30, but 40 is a different matter. in the end I think the Hoyas take with the score in the mid 60's

PLAY THE MARCH TO THE CHAMPIONSHIP GAME AND YOU COULD WIN A TRIP FOR TWO TO LAS VEGAS! LOOK FOR THE CODE INSIDE SPECIALLY-MARKED PACKAGES 12-PACKS OF BUD LIGHT ENTER CODE AT FACEBOOOK.COM/BUDLIGHT ----- No Purchase Necessary. Open to U.S. residents (except CA & TX) 21+. For a chance to win a Grand or First Prize, Game Period 1 begins 3PM CST on 2/14 & ends 3PM CDT on 3/18. For a chance to win a First Prize only, Game Period 2 begins 3:00:01PM CDT on 3/18 & ends 3PM CDT on 4/30. To participate, obtain a Code from inside specially-marked packages of Bud Light beer or to request a Code without purchase, visit budlight.com/freecode during a Game Period. Limit one (1) free Code request/day/person or email address. To play, text HOOPS to BEERS (23377) & follow prompts or visit budlight.com/freecode & follow instructions. See Official Rules inside package or at budlight.com/freecode for complete details. Void in CA, TX & where prohibited. Enjoy Responsibly – SEE COMPS FOR SPECIFIC FONT FOR THIS ©2011 Anheuser-Busch, Inc., Bud Light® Beer, St. Louis, MO