The Casual Awards, Part 2: The Running Of The Bulls

Share All sharing options for: The Casual Awards, Part 2: The Running Of The Bulls

Phew!  The Georgetown Hoyas improved to 21-6 (10-5 Big East) and escaped sunny South Florida with a 61-55 WIN over the pesky Bulls that saved the season from doom.  And on this beautiful President's Day we are celebrating by giving you not just one but two Casual Awards!  Hooray!  As usual we here at THE GLOBAL PHENOMENON are handing out hardware to those most deserving. 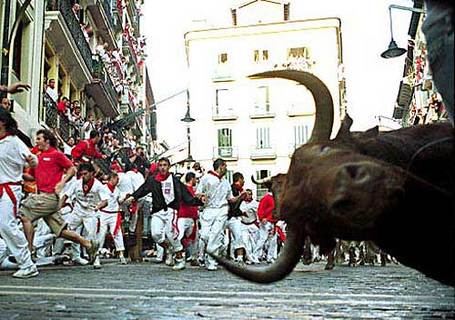 The Chris Wright Heart of a Champion Award:
Chris Wright!  Wright has established himself as the true leader of this team, and frankly after this performance merits consideration for Big East Player of the Year.  With Austin Freeman ONCE AGAIN having an off-night, Wright put the team on his back and delivered a career best 26 point performance on 8-12 shooting from the field and a perfect 8-8 from the free throw line.  CW, I want to kiss you on the mouth.  You know, in like a man-friend kind of way.

With Great Power Comes Great Responsibility Award:
Hollis Thompson has emerged as somewhat of a superhero for this team when it matters most.  His elevated level of play since coming of the bench has been well-documented, but he has really stepped up to become a guy who the Hoyas can count on when he has the ball in his hands down the stretch.  From the dagger threes against Louisville and Syracuse to the circus shots and block against USF, Hollis has been a huge performer for Georgetown of late.  Worth mentioning that Hollis has probably leapfrogged Jason Clark in my mind as Georgetown's best third option.

Dark Cloud on a Shiny Day Award:
Any win on the road in the Big East is great, but Freeman has struggled enormously since injuring his ankle against Marquette last week.  Georgetown is not going anywhere in March without a healthy Freeman, and it may make sense to give him a rest against Cincy if that is what it will take to get him back to 100%.

Get The Damn Rebound Award:
The Hoyas were only outrebounded by a 27-25 margin, but that doesn't tell the whole story.  The Bulls OWNED Georgetown on the offensive glass by a margin of 14-6, and the second chance points is what kept the Bulls in this game.  USF converted 5 of the offensive rebounds in the 2nd half into 8 points, and anyone who had Georgetown -8.5 wasn't pleased with the effort.

Syracuse Is A National Embarrassment Award:
As if we needed any further evidence that Syracuse is a joke, please see the below from Cuse grad Tim O'Toole, who happened to be calling the game on the horrible MASN broadcast.  One word: FAIL.

Oof Award:
Freeman hasn't made a three point attempt since the first half of the Marquette game - before he hurt his ankle.

Iran Contra Award:
Unclear why the guys at Voodoo Five didn't warn us that NORIEGA plays for South Florida.  He sucked, however, so all good.

Document Your Lunch Award:
Had a chance to hit Philly on a casual business trip and stopped over at DiNic's for the tremendous roast prok sandwich AND a cheeseteak FOR THE WIN. 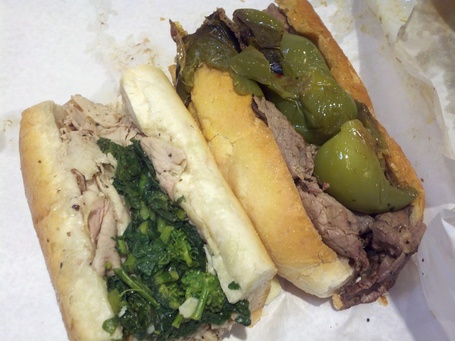 Jim Nantz Comments of the Game Award:
Kudos to the brave souls who put on hold their what surely were AMAZING Saturday evening plans to watch the Hoyas play USF.  Here are just a smattering of the Casual Offerings:

Y'ALL CAME HERE TO SEE DOMINIQUE JONES (sit on the sidelines)

ESPN 980. A few seconds behind, but much easier on the ears

I’m going to go get dinner. When I get back, the team hopefully will be off the bus.

You know your attendance is bad when you need to give free balloon hats to the kids.

by RileysDressLikeAHoyaJersey on Feb 19, 2011 7:30 PM EST via mobile reply actions this game is as high-energy as these fans

also as high-quality as this damn 16-bit MASN broadcast This is the most boring Gtown game I've seen in years

Sweep The Leg Award:
Once again the Hoyas allowed a single player on an opponent to go off, and once again it nearly cost Georgetown the game.  Augustus Gilchrist is easily USF's best player, so maybe it would have been a good idea, to you know, GUARD HIM.  Gilchrest finished with 23 points on 10-16 shooting and 7 rebounds (5 OFFENSIVE) to pace the Bulls' effort, and who knows what the final score would have been if the Hoyas had gameplanned to stop the Bulls' only offensive threat.

Pat On The Back Award:
Kudos to hoyasincebirth for stepping up and penning his first game recap after the USF game with JGD off sunning his buttcheeks in Mexico.  And though the initial post had a dizzying array of fonts, it certainly did the job.  Kudos!

Don't See This Movie Award:
Made the mistake of taking in "Blue Valentine" this weekend.  If you like movies that are well-acted but feature dogs dying, children crying and the disintegration of a marriage, this one's for you!  Good work by Ryan Gosling and Michelle Williams, however, and since it does contain NUDITY I suppose it's not a complete toss.

Old Balls Award:
NBA All-Star Saturday.  The "Skills Competition" is simply horrible.  You've got a group of Chris Paul, Stephen Curry He Who Shall Not Be Named, Russell Westbrook, and Derrick Rose and the best you can have them do is dribble around fake defenders and throw chest passes into a tire?  The Three Point Shootout is tired and never produces a winner who is actually the best long distance bomber, and the Dunk Contest should be SHUT DOWN.  I happened to dvr TNT's "Lost Dunks" special and comparing what the guys did in the past to what they do now was pretty casual.  Unless Blake Griffin jumps over a damn tank FULL OF GREAT WHITE SHARKS next year I say end the damn thing.

Big East Is A Mess Award:
The Hoyas now sit at 10-5 in Conference play and in good position to secure a double-bye in the Big East Tournament next month.  But even a little slip at the hands of say, the Bearcats on Wednesday night could toss Georgetown into the mess that sits just below them in the standings.  I'm the first to admit that after that 1-4 start that if you would have said after 15 games Georgetown would have 10 conference wins I would have punched you in the face AND ENJOYED IT, but now that we're there it's key to keep the foot on the pedal.

I'd probably have more of these, but I have to do an interview for some radio show in SYRACUSE in an hour.  That's right.  Lock and load.