Sleeping With The Enemy: The Bulls of South Florida

Share All sharing options for: Sleeping With The Enemy: The Bulls of South Florida

After that tough loss to the UConn Kembas, the Georgetown Hoyas are heading to Tampa to start another extended winning streak against the South Florida Bulls.  USF is always dangerous territory for Georgetown, since it is a land where a win is expected but a loss could be devastating.  As usual we here at THE GLOBAL PHENOMENON are bringing you everything you need to know about Georgetown's next opponent.  Special thanks to our boyz at Voodoo Five, the baddest South Florida Bulls blog in the world, for providing answers to our always intriguing questions.  VD5, this round's on us.

After you're done reading this, you can check out Casual Answers to Voodoo Five's questions here. 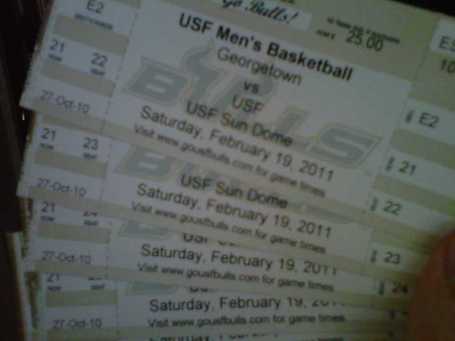 USF currently sits at 2-12 in Big East play, ahead of only DePaul in the standings. What's the deal, man?

We aren't good. Our best offensive player Augustus Gilchrist won't pass the ball even if all five Hoyas on the court and JTIII are guarding him. Our best offensive guard Jawanza Poland doesn't know how to stay out of foul trouble. Our point guard play can be described as shambolic. We can't score on zone defenses, our guards won't attack the basket, and half the roster is looking around wondering when the season will end. Coach Heath looks like he wants to hit every player with a crowbar at least 10 times a game.

At least we're doing well from the free throw line.

USF lost to BYU in double OT this season, giving the Cougars all they could handle in an early season game on a neutral court. What's your take on Jimmer Fredette? Can he carry the Cougars as far as Stephen Curry took Davidson? Do you see BYU losing as soon as it faces a team from a power conference?

Yes if not farther. Jimmer is as good as Curry was at Davidson, and he has a better supporting cast than Curry ever did with the Wildcats. Jackson Emery, Noah Hartstock, and Brandon Davies can pick up the scoring slack if need be get a win if Jimmer only scores 20 points.

We did do well holding their posts to a total of 12 points in our match-up in Texas, just forgot to guard Hartstock at the buzzer when he made the game winner. If a team has 2-3 quality posts, they can shut down their bigs and make Emery and Jimmer beat you. With the way they've been this year though, it still might not be enough.

Give us your pick for cut, thickness and temperature of the ideal steak at Bern's Steakhouse?

1" 10 oz New York Strip Medium Rare. Best $40 I've ever spent. You're there for the beef, so don't even bother with a sauce. Add a side of their garlic chive mashed potatoes and I'm set for the year.

Florida is a talent rich state but USF is sitting in fourth place on the state school depth chart. Is there anything unique to offer that could entice top talent to come there over schools like Florida, Florida State, or Miami?

For football that's easy. The Big East is the easiest road to a BCS bid, and USF has the ability to become a power in the conference and compete with WVU, Pitt, and TCU. That and our coach's last name is Holtz. Parents love that.

Always entertaining to see the coach's son make the team. Does Jordan Heath have any game?

We have no idea. After clamoring for him to come in at least once during the non-conference part of the schedule, Stan has decided to redshirt Lil' Heath this year. We're crushed after declaring him our USF Human Victory Cigar this year. Maybe we'll see him for a game or two next year.

For a state school, USF has only 4 players from Florida, relying almost exclusively on transfers. Usually this is a way for coaches to dig out of a hole but rarely leads to long term success. Is the Stan Heath show coming to an end?

I think he has at least three more years left. We're finally catching up with the rest of the Big East when it comes to the facilities arms race with the construction of the 50,000 sq. ft Muma Basketball Center, which will be open in time for fall practice. Both basketball teams along with the volleyball team has had to use the same practice facility, and if there was a scheduling conflict, someone had to move to the Student Rec Center for practice. Add that along with the complete renovation of the Sun Dome, and Heath will finally have the tools to compete with the rest of the schools in Florida and the Big East.

Even if they wanted to fire Stan, he signed a 5 year extension after our 20 win season last year. With all the construction going on around campus, I don't think they have a couple of million lying around to axe Heath and bring in another coach.

We've all laughed about the Beef O'Brady's Bowl, never understanding what the hell it is. In reviewing the roster on gousfbulls.com (SEE WE DO OUR HOMEWORK DAMMIT), we saw an ad for it, and it appears to be located in Tampa! What's up with that joint?

Basic bar food in the mold of Chili's and Applebee's. Their burgers are ok, and I like their curly fries. Best part about Beef's is that they serve beer on campus and they keep Yuengling on tap which has a brewery about a mile from campus. Nothing over the top, but you'll get out of there for under 15 bucks even with a beer or two.

USF's most famous alum, Jenn Sterger, is now most famous as the girl who received the FavreDong. Does this fill you with pride? Ever meet her during the Cowgirl days? 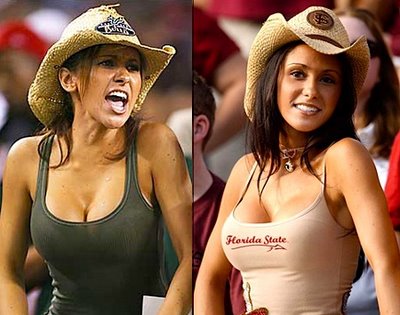 I think we've shunned her for leaving USF after two years and going to FSU. That, along with her trying to jump on the USF bandwagon in '07 then falling off the face of the earth after we lost to Rutgers doesn't make her really popular around these parts.

Have you ever made it rain at Mons Venus?

Considering I was a poor college student when I was in Tampa, the answer is a definite no. It's 20 bucks just to walk in the door, and after being in there an hour or two watching the talent you're out at least 100 bucks. That's 2 months worth of ramen and Natty Light right there.

Despite its struggles in hoops, USF remains a threat on the football field. What do you want to see happen to the Big East Conference, either through expansion or contraction? Where did they go wrong?

If the guys in Providence are already talking about 10 teams, why not just add two more and make it 12 teams and add a championship game. I think Villanova is going make the move up, and if we add Houston/SMU and UCF that will help out with it brings 12 football and 19 basketball teams. We're already playing 18 conference games, so we just get rid of the mirror games and play everyone once. We can either do that or wait for the Big XII to implode and grab Missouri, Kansas, and Kansas State. Either way.

Wait, why is your blog named VooDoo Five?  What does that even mean?

Its the play that symbolizes USF Athletics more than anything I can think of. As Voodoo put it when we moved to SBN, "It was a debacle wrapped in a clusterfuck stuffed in an epic fail gift box and delivered by train wreck mail to everyone in Bulls Country."

Most USF fans who watched that game can still tell you where they were when Voodoo 5 happened. I was in front of my computer in Texas, following along with a gamecast. (This was before the invention of ESPN360 made my life as a transplanted alum about 100 times easier.) Others were at home with family on Thanksgiving weekend, or in their own homes, or in a bar somewhere. For everyone, it was a stomach punch that we still haven't recovered from. We may carry on as if things are OK, but as soon as someone brings that play up, the bad memories pour back in.

Read more about it here.

We'll lose, it just depends on by how much. Although we're good for one random Big East home win a year, and Georgetown has been the victim once before...