Share All sharing options for: The Casual Awards: Magic 8 Ball

Eight in a row! Are you kidding me? After that 1-4 start in Big East play, the Hoyas are now a remarkable 9-4 and sitting alone in 3rd place. With just five games left to go before the Big East Tournament, the double bye is within reach. Make no mistake about it, that was a gutsy win by Georgetown over a tough Marquette team, and as always we here at THE GLOBAL PHENOMENON are handing out hardware to those most deserving. Away we go...

Right Guard Anti-Perspirant Award:
Buzz Williams. Good Lord, that man can sweat. At one point in the first half, his perspiration covered his entire button down shirt. Then, for a reason none of us will ever understand, ol' Buzzsaw decided to throw on the suit jacket for the second half. AND THEN HE SWEAT THROUGH THE JACKET TOO. Just phenomenal hustle. It must be said though, there is something rather endearing about a sweaty fat guy.

ESPN The Streak Award:
The Hoyas have now won eight straight Big East games, the second longest streak in JT3's time at Georgetown. What is the longest? 11 games. When did that happen? 2006-2007. How'd that season end up? Final Four. #justsaying

Anti ESPN The Streak Award:
Syracuse has now lost six of eight games and sit at 9th in the Big East. Tee hee.

Jennifer Hudson Body Transformation Award:
Did you guys see J-Hud throw down on that Aretha Franklin Grammy's opening? What pipes! What weight loss! This one goes to Marquette's Davante Gardner, who checks in at a slim TWO HUNDRED AND NINETY POUNDS AS A FRESHMAN. Wow.

Bruno Mars Jack Of All Trades Award:
The Georgetown Hoyas dismantled Syracuse's vaunted 2-3 zone on Wednesday and then beat some ferocious man-to-man, pressing defense yesterday against Marquette. Quite impressive versatility. Also impressive was motherfucking Bruno Mars. I need to learn how to play the piano AND the drums AND sing AND get my hair to look like that.

Back To The Future Award:
That was an extremely chippy game. The refs allowed a lot of banging in the paint and Buzz Williams' squad was clearly taking a page out of JT2's old Hoya teams. He was subbing like it was a hockey game, pressing and guarding from everywhere on the court. JT3's teams are often perceived as soft, but not yesterday. The Hoyas stood toe-to-toe with Marquette, with Nate Lubick, Julian Vaughn, Henry Sims and Jerrelle Benimon not backing down at all.

The Elephant In The Room Award:
The Hoyas received some serious home cooking from the referees at crucial times yesterday. The phantom technical foul on Darius Johnson-Odom in the first half kept the game close. The charging foul Chris Wright took in the second half was also extremely questionable. That said, Julian Vaughn had some terribly ticky-tack fouls on him, but consider my eyebrows firmly raised.

Old Balls Award:
Len Elmore is an awful commentator. Some of the stuff he says is unintelligible, and when he does form a clear sentence, it is usually wrong. When Freeman was missing shots in the second half, Elmore couldn't put together that maybe his ankle was bothering him. Instead, he thought that Austin should have his eyes checked.

Royal Rumble Award:
Julian Vaughn. Not his best game of all time but throwing elbows and mixing it up? We like it. Two plays really stand out, both in the second half: first, he was jostling and got hit with a double foul (along with one of Marquette's bigs) and on the next play, rather than sulk, Julian threw his body out and picked up a block while setting a screen. Not the smartest move but it showed heart. Then, late in the second, Julian ended up fronted by one of Marquette's guards. Rather than merely calling for the ball, he threw the defender to the ground, caught a lob, and slammed it down. Tremendous upside. 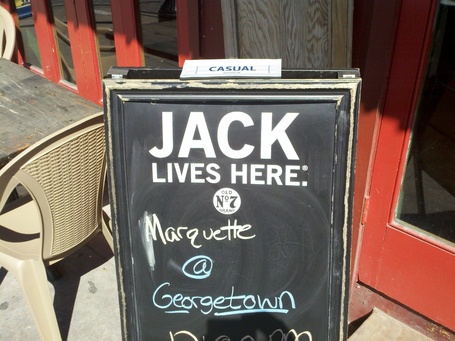 Paper Bag Over Head Award:
I really didn't think it was possible to be more embarrassed of a halftime promotion after the Step Team Disaster of 2011 (thinking of starting a telethon to prevent that from happening again). Then boom, the Geogetown Basketball Diplomacy Project happened. Don't Jumbotrons have spell check too?

I Have No Idea What to Name this Award, Award:
This award started out as a shout-out to a special celebrity in attendance, the question-mark guy. Then it turned into a huge laugh when I realized he is a Marquette alum. Now it is RAGE, because he is sitting in Section 107 - a young alum section. RAGE.
The Department is Alright Award:
Georgetown Promotions. The pump-up video is awesome. Best one I have ever seen. And playing it before the first half and second half is an awesome idea. Just awesome. Awesome. (h/t: KeepItSaxa)
Jonathan Wallace "Ice in Veins" Award:
The Georgetown Hoyas. Going 11-11 from the charity stripe in the last ten minutes was a major reason why Georgetown was able to get back in the game. Special recognition to Jason Clark, who went 6-6 in last four minutes despite not converting a field goal in the game.
Man of the People Award:
Henry Sims. Soon-to-be-VP Sims stepped up big after Vaughn picked up his fourth foul midway through the second half. Biggest play of the game was the pretty post move that led to a three point play and made it a two possession game. Good teams have bench players step up when starters get in foul trouble. Good teams, like those in the top half of the conference rankings.
Hollis Thompson Game Changing Attitude Award:
Enough cannot be written about how much the team has changed since Hollis Thompson moved into the role of the sixth man. He has shut down opposing players, hit huge threes and today, he added 12 rebounds, in the SECOND HALF ALONE.
Jim Nantz Comments of the Game Award:
Hundreds upon hundreds upon hundreds upon hundreds of comments in yet another epic gamethread. Here are just a few of the casual offerings that caught my attention:

Really stretching our "rivalry" with Marquette

We’re both Jesuit schools and we’ve both won the championship before? Really?

the third bong rip, i’ve decided to watch this game from space.

when did all of our guards start shooting like rick jackson? This has to stop

bring on the bourbon

I’m crawling into my bottle of Jack Daniel’s and not coming back out until they give the prognosis on Freeman.

Sims needs to step up, could really help his candidacy over the next few minutes

who sweats thru a thirty-two hundred dollar suit?

Utah State Award:
Georgetown student section. The Aggies have pretty much been the cream of the crop this season but at the Marquette game, the student section was only about half full but still got after it. The repeated GET OFF THE FLOOR chants at Buzz Williams were highly comical and the refs even gave the man a warning. Very well done.
Willis Reed Award:
Who else? It's a cliched award to hand out but Austin Freeman clearly gutted it out in the second half and played some outstanding basketball in this game. There's little question that one of the best ways to earn the respect of teammates is playing hurt and that's a move that should pay dividends as the year rolls on. There have been questions as to who Georgetown's best player is, who the most important player is, and who the leader is. The second half pretty much solidified that this is Austin's team and will go as far as he's able to carry them.

The Georgetown Hoyas are a nationally ranked powerhouse.
UConn is NeXt.