Sleeping With The Enemy: The Golden Eagles of Marquette

Share All sharing options for: Sleeping With The Enemy: The Golden Eagles of Marquette

The Golden Eagles?  What the hell is that crap?  Man, after the epic Syracuse win this game has LETDOWN written all over it, though maybe our streaking Hoyas are on such a roll that at this point they can overcome anything.  As usual we here at THE GLOBAL PHENOMENON are bringing you everything you need to know about Georgetown's next opponent, and special thanks to Anonymous Eagle, the niftiest Marquette blog on the www for providing answers to our always intriguing questions.  Anonymous Eagle, this Milwaukee's Beast is for you.

Our answers to Anonymous Eagle's questions are HERE.

It has been an interesting year for Marquette, you guys currently sit at 10th in the Big East, yet would be considered a top 3 team in almost every other conference in the country. Is it times like these when you regret moving to the Big East?

Jesus H., no! Are you kidding? These are the times when we're grateful we're in the Big East. Marquette lost all of its non-conference games against quality competition this season (Duke, Gonzaga, Wisconsin, Vanderbilt). If we're in any other conference, we're looking at the conference schedule saying: "Dammit, there's no way we can get enough good wins to get into the Dance now. We're done." This year, we looked at the schedule and said: "It's not going to be easy, but we've got WVU and Pitt and UConn (twice) and Notre Dame (twice) and Louisville and Georgetown and 'Nova and Syracuse -- we can still get back into the mix." There aren't many other conferences that afford you that opportunity.

Remember when you guys beat Syracuse? That was awesome.

It was, but not as awesome as getting to giving (that Syracuse Blog That Shall Not Be Named) the Naughty Puppy treatment by rubbing his nose in this post.

Marquette had a brutal stretch, playing 7 of 8 games against top 15 competition, yet are still a respectable 6-5 in the conference. With only UConn and Georgetown as the two remaining ranked teams, what do you expect your record to be at the end of Big East play?

I'd like to say 10-8, but with Seton Hall reinvigorated with Jeremy Hazell back on the squad, 9-9 might be more likely. I don't expect to win at Georgetown or at UConn, Seton Hall on the road will be a chore (witness our near bed-soiling against South Florida in the Sun Dome on Wednesday), and we get Providence, the Hall, Cinci, and St. John's at home. Having escaped from Tampa with a gift-wrapped victory over the Bulls, we're still due for our once-a-year, inexplicable loss ... although maybe we got that out of the way with the Run of Doom in Louisville. Gross, now I'm thinking about that game again. Let's move on.

Do you expect to get into the NCAA Tournament? How many Big East teams should get in?

If we go 10-8 in the Big East and win our first Big East tourney game, yes. On the second question: I think it has to be considered likely that the Big East gets at least 10 bids this year. I mean, look at the rest of the field: half the BCS conferences stink on ice and, with few exceptions, the mid-majors are cancelling each other out. My God, people are still talking about Kansas State, smoldering crater that it is, getting in the tourney at this point. The bubble looks like Los Angeles post-alien attack in Independence Day right now. There are spots to be had, and I don't think a team that goes over .500 in this conference can be left out.

Complete this sentence - if Marquette gets to the [Insert Round in NCAA Tournament], I will be happy.

With Marquette's uneven play so far this year, I'd be happy if they can string together enough wins to get an invite. After that, it's all gravy.

Are you a Packers fan? Does anything really matter right now to you? 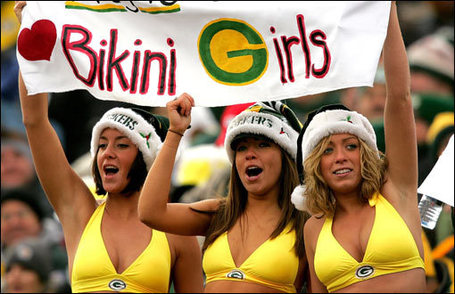 Darius Johnson-Odom and Jimmy Butler have been a two-headed monster of awesome. Who else should Georgetown fear on Sunday?

JUCO transfer Jae Crowder. Coming into the season, the biggest issue facing Marquette was: "Who's replacing Lazar Hayward?" Crowder has capably filled the big shoes left by 'Zar, and he's a player from a similar mold: willing and able to shoot from three, good mid-range jumper, not afraid to tussle in the paint with the Big East heavies, nifty around the rim. He's not the rebounder that Hayward was, but he's no slouch in that regard, either, and the biggest issue facing him at this point is learning to avoid silly fouls. Coach Buzz says he's made the smoothest transition from JUCO ball to high-major college ball that he's ever seen, and it's hard to argue. Crowder has been exactly what the doctor ordered.

When all is said and done, which four teams end up getting a bye in the Big East Tournament?

Pitt, Georgetown, Notre Dame, and ... uhhh. Hmm. That last spot gets dicey. 'Nova is much more skittish than I was expecting (losing on a four-point play to Rutgers after getting housed at Providence?), 'Cuse is schizo, UConn is coming back to earth, and Louisville can barely get enough warm bodies on the court. I guess I'll say UConn, but I'm not confident in that prediction at all.

Who does Marquette consider its biggest rival in basketball?

We've been talking about this a lot recently, and we've come to the sad conclusion that we don't really have one right now. We don't much care for Wisconsin, but they don't feel the same about us, what with the football and all the other teams in the Big 10/11/12. (Which, in the end, is fine: they can keep ignoring us, we'll keep taking their best basketball recruits from right under their rodent noses.) We'd love to hate DePaul, but they're James-Van Der Beek's-Southern-accent level awful with few signs of improvement on the horizon. (I mean, seriously: when's the last time 'Cuse or Georgetown beat the other by 30 points? You can't have a legitimate rivalry when one team is that bad.) Marquette's played Notre Dame for years and years, even before we joined the Big East, but, again, the Irish fanbase cares more about their habitually mediocre football team than they do about basketball. And we can't hope to compete with those of you who have been in the conference since the Big East began; we're not going to crack the Fortresses of Hate that have been built up by the UConns and 'Cuses and Georgetowns and Pitts and 'Novas over the last 30 years.

Long story short: we're accepting applications. Send over anyone you think might be a match.

Who is in the all time Marquette starting five? I assume the backcourt is Doc Rivers and Dwayne Wade, but who else rounds out the lineup?

Doc is in the discussion for the backcourt, but it's impossible to leave Butch Lee out of one of the guard spots. Lee was the most important player on Marquette's 1977 championship team, won the Naismith Award in 1978 and was a two-time All American. Wade claims the other guard spot, even though he only played for the team for two years. His triple-double against Kentucky in the regional finals in 2003 remains the greatest game by an MU player I've seen in my life. The frontline would feature the iconic George Thompson, who, until Jerel McNeal broke the record two years ago, was Marquette's leading career scorer: 1773 career points in only 87 games, all without the benefit of a shot clock or a three-point line; and Bo Ellis, who's the only player in MU history to play in two Final Fours ('74 and '77) and still ranks in the top 10 in a number of career categories (points, rebounds, blocks, wins by team in his career). The last spot is a toss up between Dean "The Dream" Meminger and Don Kojis and maybe even the recently-departed Maurice Lucas, who was one of the baddest muthas to ever step on a basketball court. Let's give the nod to the Dream, just based on the nickname alone.

In your mind, which Big East fanbase is the most annoying?

'Cuse's sense of entitlement gets on my nerves, and the overserved Canadian who was bleating "LESSS GOOO ORRR-UNNJJE" for two straight hours at the most recent Syracuse - Marquette game didn't help their cause, but, in my mind, there's no competition for this one: it's Notre Dame. You've heard this joke, right? How can you tell if there's a Notre Dame grad in the room? He'll tell you. Those people -- and my father-in-law is included in that number -- are on another level that the rest of us (thankfully) can't compete with.

If you had to choose Buzz Williams or Tom Crean to run the program right now, who would it be? How would you grade Buzz on a 1-10 scale since he took over at Marquette?

Tough question. Listen, Crean's a Grade-A asshole (you can bleep that if you need to) and a first-rate snake oil salesman, and I remain delighted with every bit of misery that befalls Indiana as they continue to look up at Northwestern in the Big 10/11/12 standings. He's not a good game coach, he drove off assistants left and right with his impossible standards, and I firmly believe that every third sentence out of his mouth was a lie. That said: Crean got his teams to play defense, for the most part, and Coach Buzz has struggled woefully in that regard. Offensively, we're worlds advanced from where we were with Crean's dribble-handoff offense, and, when MU is clicking offensively, it's a sight to behold. Defensively, though, we're a train wreck, and things have gone from bad to worse in that regard since Coach Buzz took over.

In terms of recruiting, I take Buzz, although it's a closer call than you might think. You can't argue with Jimmy Butler and DJO and Crowder and Vander Blue and Jamil Wilson (a transfer from Oregon who's currently sitting out the season), but the fact is that Wade rescued this program from prolonged mediocrity and Dom James, Wes Matthews, and Jerel McNeal established Marquette as a program to be reckoned with in the Big East. Gun to my head, I'll go with Buzz, who's been a solid '7' since he took over after Crean slithered out of town.

Who is the one player in the Big East right now that would drastically improve Marquette?

We need a big man who can guard opposing bigs straight-up, so we don't have to resort to gimmicky double-downs that lead to easy ball rotations and wide-open threes. And our offense is fine, so we don't need somebody to put up big numbers on the other side of the court. So I'll say Pitt's Gary McGhee, with Julian Vaughn a close second.

By now, I think I've made my point that Marquette's defense is almost laughably porous. (For shit's sake, we let SOUTH FREAKING FLORIDA shoot 68% from the field in the first half yesterday.) And the thing we struggle with, most of all, is defending the three: according to Pomeroy, we're 256th in the nation in defending triples. Conversely, Georgetown (again, according to KenPom) is 33rd in the nation shooting the three. This, to put it succinctly, is a recipe for disaster for Marquette. We haven't lost by double digits since the Hoyas pantsed MU in the Big East tournament last year. I fully expect that streak to end on Sunday.