Share All sharing options for: The Casual Awards: Louisville Ain't Got Sh*t

All of a sudden your Georgetown Hoyas are 17-5, 6-4 in the Big East, and riding a horse named 5 Game Winning Streak.  With Providence coming to town on Saturday before next week's epic showdown with Syracuse, things are looking bright in Hoya Land.  But before we turn to the Friars, after last night's riveting WIN against the Louisville Cardinals we're handing out hardware to those most deserving. Away we go... 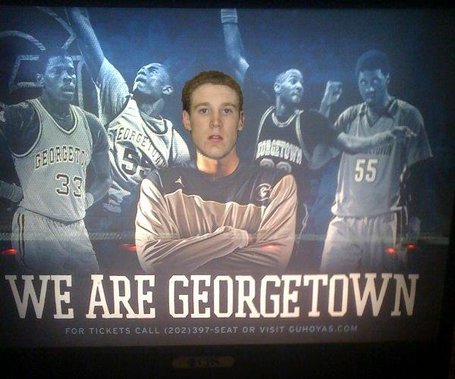 The Chris Wright Heart of a Champion Award:
Chris Wright!  Wright earned this one with a season high 24 points and just 2 turnovers in his 35 minutes of action.  Wright's spinning, falling "layup" to tie the game at 55 gave the Hoyas the momentum they needed in the final minutes to pull this one out, and his 8 for 8 from the line was as clutch as it comes.  Honorable mention: Julian Vaughn.  Vaughn was a rock in the middle last night, making all 4 of his field goal attempts and finishing with 10 points, 5 rebounds and 4 blocks.  Vaughn has connected on his last 9 free throw attempts.

Food For Thought Award:
Since Big East play has started, the vaunted Hoya Trinity has not had a game in which all three have played as well as they did during nonconference play. Yet, Georgetown is on a five game winning streak, and could conceivably be in the top 4 of the Big East within the next week and a half. So what happens when all three find their collective groove?

You Should Take A Few Plays Off Champ Award:
Julian Vaughn haters. The dude keeps coming up with crucial buckets, big rebounds and blocks, and is knocking down free throws at an alarming rate. For those of you who were clamoring for Henry Sims to start, well umm SHUT UP.

Last Guy Standing Award:
Doesn't it feel like if the 2010-2011 Georgetown Hoyas were to have a team Royal Rumble that Nate Lubick would end up triumphant? He's got a mean streak that legitimately scares viewers through the television screen. Lubick almost killed one of the refs with just a glare last night, true story.  He also killed some students in the front row with that free throw attempt at the end there, but whatever.

NBC "The More You Know" Award:
It was a pleasure to watch ESPN's camera track Rick Pitino's lip movements last night. At one point when Louisville batted the ball out of bounds, he obviously screamed "Grab the fu#*$ng ball!" And then when one Louisville player threw the ball out of bounds at Pitino instead of a teammate two feet away, Pitino yelled "You threw it at me!" Awesome stuff.

Big East Player of the Weak Award:
Peyton Siva.  The much heralded giant killer entered this game as the reigning Big East Player of the Week, and left with just 5 points and 8 turnovers while shooting 20% from the floor.  Georgetown's defense didn't give him much room to create space, but I have a feeling he's not going to win any more player of the week awards in conference play. Here's an idea - don't give the award to anyone other than Kemba Walker, Ashton Gibbs or Austin Freeman for the rest of the year.

Cocaine Award:
The Hoyas shot 76% from the field in the second half.  That's impressive, like 1985 Villanova impressive.

New Boston Garden Homecourt Disadvantage Award:
The Verizon Center was loud - when it had to be. it's easy to scream and jump up and down when the game hangs in the balance or the Hoyas take a lead, but constant noise will help the Hoyas even when they are struggling - like that first ten minutes of the game.  I suppose it's tough to get on the crowd from my vantage point (watching on TV), but I wish Georgetown had that student section that is on top of the action and makes it seem to people tuning in that Georgetown fans are really into it for all 40 minutes.

Old Balls Award:
JGD.  Casualhoya.com's Board of Gimps knows all too well that JGD spends most of his time fishing for compliments, but what better way to establish yourself as an authority on anything other than sucking than by QUOTING YOURSELF in a postgame recap?

Less than three weeks ago I wrote "We've seen this team play extremely well this year, and hell, it's not inconceivable that they rip off next six games and sit at 7-4 heading up to the Carrier Dome.  But right now, it's very hard to envision."

How To Score 2 Points Yet Avoid The Wrath of Casual Hoya Award:
Jason Clark. Less than a minute to play, ZERO POINTS for the day and heading to the line to save the entire season. Clark made both. Good for him, because I was so nervous I could barely lift my arms to play the second-to-last Double Stuf Oreo on in my mouth. (I threw the last one at my mom when she came down into the basement to ask why I was yelling after the win.)  Ugly game for #21, but those 2 free throws to put the Hoyas up 3 with 24 seconds to play were huge.  They almost make us forget his 0 for 6 perfromance from the field and 3 sloppy turnovers.  Almost.

Celebrate Good Times Award:
Yeah, Georgetown won.  But the highlight of the night was getting the DIAGONAL CROSSWALK on the corner of H and 7th TWICE without a wait.  That's right.  DIAGONAL CROSSWALK.  Now if DC could just contain the apocalyptic responses to millimeters of snow, it would be the greatest city in the world.

Hosed Award:
Hey, that's Chris Wright on the floor after his miraculous shot that tied the game at 55.  Was it worthy of #1 on SportsCenter's Top Ten list ?  Of course not!  #1 was some Mavericks highlight.  TOSS.  NBA is fixed. 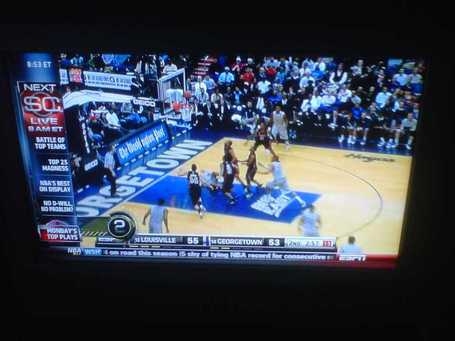 Worst Dancer Award:
Jerrelle Benimon. For my money, the best halftime show in all of sports is the candid Q&A session they do with Hoya players on the video boards. And though I thought asking Austin Freeman to pick between Lady Gaga or Beyonce, or getting Chris Wright to proclaim he is a Cowboys fan has been pretty good, NOTHING was better than asking the entire team individually who the worst dancer is and ALMOST ALL OF THEM singling out Benimon. Even JT3! (Moses was a DISTANT second). We need to pull out Midnight Madness tape and figure out what the hell
happened.

Get The Damn Rebound Award:
In that maddening sequence with under one minute to play, Louisville grabbed THREE offensive rebounds after missed shots.  The sequence ended with Siva getting fouled and hitting both from the line, and for the game the Hoyas were outrebounded by a 31-25 margin.

Bookends Award:
Hollis Thompson.  Hollis hit two thee pointers last night, both as Georgetown's final field goals of each half.  The three at the end of the 1st half gave the Hoyas a 4 point lead into the break, and his bomb in the final minutes gave the Hoyas a 58-55 lead, a lead they would never relinquish. 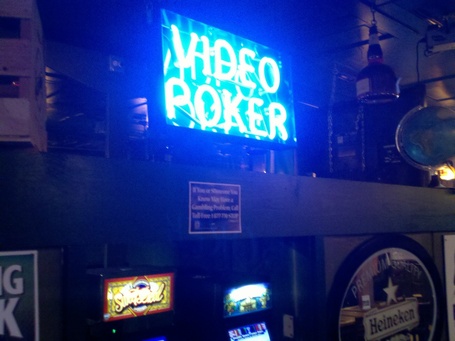 The fact that most bars in New Orleans have video poker machines is awesome, especially after Louisville took a 55-53 lead with just minutes to play.

Bring It On! Award:
In the Texas - Texas A&M game, ESPN often went to commercial showing the A&M cheerleaders.  New rules for fatherhood: keep daughter off the pole, away from Charlie Sheen, and off of any major state school's cheerleading squad.

Play of the Game Award:
Many will nominate Clark's free throws or Hollis's three but as Louisville started to heat up, Chris Wright took the ball from baseline to baseline and converted a very difficult layup in traffic. To double the fun, JT3 called a timeout immediately after the score. Great symbiotic moment with Thompson knowing that the team needed a timeout to reassess what Louisville was doing but recognizing that Wright was playing under control and had the head of steam necessary to convert.

Southpaw Award:
Georgetown's offense is based on precision cuts and movement but sometimes it's the little things that allow it to function properly, like making a left handed pass or taking a left handed shot. Sims has shown a great ability to pass out of the post (and from the perimeter) using his left and though Julian has been a little reliant on the lefty hook, it's a shot that falls. We even had Chris Wright converting a left handed layup on a full breakaway. At some point this year, using the body as a shield and converting with the off-hand will be the key to a game and it's obvious that Georgetown focuses on those subtleties of the game.

Handcuffs Award:
Look, I'm sure Jerrelle Benimon is a really good kid and I have no doubt he plays a very valuable role in practice, but enough is enough.  #20 has turned into a fiesta of fouls and turnovers, and he must be stopped.  On a related note, I'm looking forward to him single-handedly winning the game for us in Syracuse.

Club Level Upside Award:
Though sitting with OldHoya has its advantages, the Club Level simply offers outstanding food selection. The BBQ probably won't be on Pitmasters anytime soon but it's a solid meal and they load it with sauce. Tonight was a casual hot dog - a steal at $5.50 and actual grilled with a nice condiment selection. 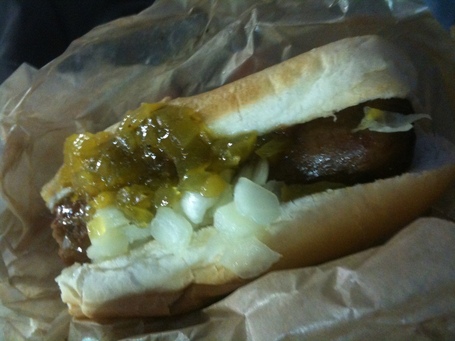 Jim Nantz Commenters of the Game Award:
Yet another epic gamethread, and here are a few of the casual offerings:

If Beni comes off the bench before Hollis

I’ll throw something at III.

Glad you made it to a basketball contest. In case you were unaware – Section 118 is not your designated sit and not cheer section.

One: what on earth is with Jay Bilas’ constant references to the WSJ? I’ve been cooking so it’s possible I missed the start of this weird inside joke between the announcers, but since they’re announcing a basketball game on national television… maybe less of that?

Two: what drunken watering hole did they pick these refs up from?

In nwk penn station, will probably get disease from it but at least i can watch the game He’s gone from suck to blow.

‘cause I’m too old for this shit.

Ladies and gentlemen, your Georgetown Hoyas - taking years off basketball fans' lives since 1907.

Best Postgame Celebration Award:
Chris Wright, Austin Freeman and Jason Clark.  Dear God Twitter is just an awful and amazing and unspeakable thing.  Things I know because of it: Roy Hibbert played Black Ops last night after dropping 24 and 11, Aaron Bowen had trouble sleeping at 2am, Jabril Trawick is trying to stay hydrated, and the HOYA TRINITY hit up the Tombs for a little post-game celebration.  Ice water and NCAA-approved Power Bars ON THE HOUSE! It's a shame that none of our loyal on campus readers could leave, uh, their roommate's basement, to DOCUMENT the celebration.

Positive Prognosis Award:
Hoyasincebirth has turned into some sort of magical soothsayer huh? No matter how ridiculous it seemed when he was demanding that Hoya fans see the light, he's actually been right. Take a bow you optimistic son of a gun.