Sleeping with the Enemy: The Friars of Providence

Share All sharing options for: Sleeping with the Enemy: The Friars of Providence

Your super duper Georgetown Hoyas are back in the friendly confines of the Verizon Center tomorrow to take on old Big East buddy the Providence Friars. As the Hoyas attempt to close out 2011 with a win, as usual we here at THE GLOBAL PHENOMENON are bringing you everything you need to know about Georgetown's next opponent. Special thanks to Friar Blog, the place you want to go to check out all things Friars, for providing answers to our hard-hitting questions. Friar Blog, this Coors Light is for you. When you're done reading this, head on over there to check out our answers to some Providence Qs.

How happy are you with Ed Cooley vs. Keno Davis? What has been the most significant difference between the two?

I couldn't be happier with having Ed Cooley at the helm. It's been a complete 180 with so many differences, but the most significant is just creating discipline and accountability in the program. Can he completely fix the defensive problems with most of the same players in less than a year? Probably not, but he can get them moving in the right direction through communication, fostering team togetherness, and demanding intensity out on the court. Set plays on offense and encouraging passing the ball are always a plus. Cooley also seems to be developing great relationships with the players, something that had been incredibly lacking in the last several seasons.

By the end of the season, I'm confident Coach Cooley's Friars will be playing a brand of basketball that is significantly better than what we saw at the start of the season. I think that is all we can really ask for this year. With the big time recruits coming in next year, it could be the start of something special for Providence College Basketball.

More fun with the Friars after The Jump:

Speaking of Davis, how would you describe his tenure as coach of Providence?

A complete, utter disaster on and off the court in every way manageable. Keno seemed like a nice guy, but he was way over his head in leading a team in the BIG EAST. He ran the team into the ground and PC became a national laughingstock. Keno Avis! Because they got no D! Jay Bilas from downtown!

I have high hopes for Providence this year and beyond, is Ricky Ledo the best recruit coming in next year?

Ricardo Ledo is definitely one of the best recruits PC has seen, but there are still some questions of whether or not he can qualify. He'll need a waiver from the NCAA since it will take him 9 semesters to complete high school. As we saw with trying to get Kiwi Gardner eligible, I'm sure it will be a quick and smooth process that will end well. *Kills self*.

You can argue that point guard Kris Dunn out of Connecticut is just as good. He's extremely fast and has the talents and physical frame to be an elite guard in the conference. He's also a smart kid with a good head on his shoulders, and could be the leader of the team in a very short time.

What happened in the St. John's game? I was very surprised when I saw that box score.

Being from NY, I had the pleasure of finally seeing this year's team in action by going to the game in Queens. Just an absolute disaster from the very start on both ends of the court. Offensively, the Friars had trouble with St. John's zone, and Vincent Council had one of his worst games of the season committing numerous turnovers. When he struggles, PC doesn't have much of a chance. On the defensive end, The Red Storm pretty much had their way with us. For a team that has struggled shooting the ball this season, they came out firing to set the tone of the game. In the 2nd half, they didn't need to shoot jumpers because easy layups, ridiculous alley-oops, and Mo Harkless baskets happening every 1-2 minutes. We made Harkless look like a 1st Team All-American out there, and he broke the rookie record for a first BIG EAST game with 32 points.

Hey, at least we got a good Ed Cooley press conference out of it!

"A blind man could have scored today. I promise you we will correct that."

Who are the team's best scorers and rebounders? How much does it hurt to not have Marshon Brooks?

The bulk of the scoring is going to come from the backcourt and the Three C's - Vincent Council, Gerard Coleman, and Bryce Cotton. While Council and Coleman have already proved they can score in BIG EAST play, the jury is still out on Bryce Cotton. He's more of a catch and shoot type player who is still trying to adjust to attacking against tougher defenses. The Friars don't get much offensive production from their frontcourt, but freshman LaDontae Henton has surprised early on with his shooting capabilities and his overall knack for the ball.

Rebounding is a big issue for Providence, and it will probably only get exposed more in conference play. A freshman (Henton) and a sophomore guard (Gerard Coleman) are putting up the best numbers so far, which is pretty telling.

Marshon Brooks was able to single-handedly keep the Friars in a lot of games, but I don't know if the team is that much worse this year without him. Ed Cooley is bringing a more structured and disciplined offense that should hopefully bring a similar efficiency by getting the most out of all the players. There is no doubt that Marshon's incredible scoring talents are missed, I just wish he had one season under Cooley and a real offense.

The best case scenario unfortunately is around 5-6 wins, with hopefully a good home upset thrown in. Expectations are not high, so all we are really looking for is improvement as the season goes on instead of focusing on wins and losses. The worst case scenario is that we revert to the Keno Davis days, getting blown out in the process and pretty much mailing it in with no effort given in February and March. I can't see Ed Cooley allowing that though.

When all is said and done, who do you think will win the Big East?

Syracuse obviously. They are so talented and gifted, I can't see them losing a single game all season, including through the NCAA Tournament. Seriously, do other teams think they have ANY shot at beating this team? Greatest offense, unbeatable zone defense. Perfecting coaching. Great fans. Just an unparalleled combination of basketball excellence that will not be stopped this season. (Was that a good enough reverse jinx for you?)

If you had one game that your life depended on, would you choose Rick Pitino or Billy Donovan to coach it?

It's your last meal ever in Providence, where are you going and what are you ordering?

Definitely an Triple Murder Burger from the Haven Brothers Diner, the diner on wheels! 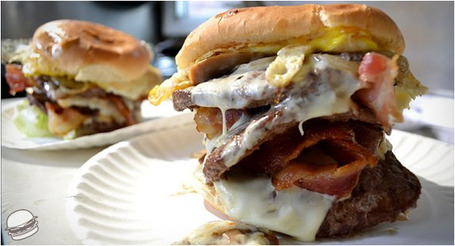 What do you make of all this conference realignment? Would you rather a basketball-only conference or how the Big East is planning on being constructed with teams throughout the nation?

As you obviously know, not having a football team in all this means we just have to sit and wait and hope our schools don't get left out in the cold. The endless rumors and speculation before the season started was pretty terrible. I'd rather see a basketball-only conference with more stability, but I'm curious to see how recruiting will be affected. The best conference in the country is a big selling point, and I hope by the time the conference eventually implodes Ed Cooley will have already created something great at PC. A boy can dream, right?

Tell me something interesting about Providence, RI that I don't know.

Did you ever notice a Big Blue Bug in Dumb and Dumber when they are driving down Route 95? It's on the roof of New England Pest Control, and the world's largest bug. It's a big blue termite, 58 feet long and 928 times actual termite size.

What is your prediction for Saturday's game? What is the final score? Any big plans for New Year's Eve?

It was probably no fun at practice this week after the St. John's game, so I'm guessing the team will bring it on Saturday. However, I think the Hoyas frontcourt will still be too much to handle, especially on the road. It won't be a blowout, but I think Georgetown takes it 75-66.

As for New Year's, I've got a one-year old so the thought of staying up until midnight doesn't seem very appealing haha.