Share All sharing options for: The Casual Awards: Christmas Spectacular 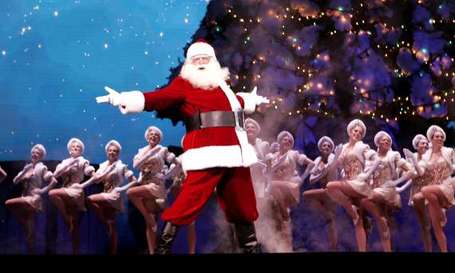 Chris Wright Heart of a Champion Award:
Markel Starks. Yes, Jason Clark and Hollis Thompson led the Hoyas in scoring with 18 points and 17 points, respectively, but it was Starks who brought the egg nog to the table, with 14 points, 3 assists and only 1 turnover. Our man at Over the Hilltop put it best: "For much of the first half, the Hoyas' offense relied to a large part on Markel Starks. The sophomore guard had 14 points, nine in the first half, including a pair of threes to kick off the Hoyas' scoring. Starks has emerged as the true fourth option on this year's Georgetown squad, averaging just shy of 10 points per game while shooting better than 40 percent from three. (As a side note, the fact that we're even counting a fourth option is an implicit tip of the cap to Henry Sims, who is receiving just praise for his senior year transformation.)"

Most Exciting Non-Game Winning Play Of The Season Award:
Henry Sims' dunk at the end of the first half. Two beautiful passes followed by a thunderous dunk to basically end the first half? Awesome. Even more awesome? The three way chest bump between Sims, Jason Clark, and Markel Starks. Watching the Hoyas on the fast break is really exciting, partly because of the unselfishness, and partly because it happens like three times a month. From one Casualty who attended the game: "That end of the first half dunk by Sims made the crowd so loud that my little 4 year old niece started crying. Yes, that Sims dunk was so nasty it made my niece cry!!" 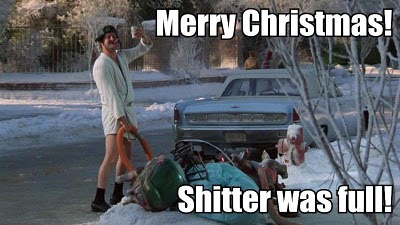 More Than Just A Shooter Award:
Jason Clark. His offensive and defensive game has really stepped up this year. For one reason or another, Clark slumped through most of Big East play last year and was viewed by opposing scouts as a threat only from beyond the three point line. This year, he is scoring in a litany of ways, with the prime example being Thursday night's game. He scored on layups, on pullups, on threes, and even on tip ins. Add 4 steals and 5 rebounds to the mix and that was quietly his most complete game in a Georgetown uniform.

Uncle Scrooge Award:
John Cahill. Cahill continues to baffle the Hoya faithful with an array of awful calls, none more ridiculous than calling Greg Whittington for the technical foul on an obvious basketball play that wasn't close to being an elbow to the opponent's face. If Greg Whittington wanted to elbow someone in the face, you'd know it.

Expectations Done Changed Award:
Henry Sims. Can you imagine what we would have done last year if Hank put up 12 points and 9 rebounds against a team that was ranked in the top 10 at the beginning of the season? It would have damn near shut the GLOBAL PHENOMENON down. But this year? We expect more from him and know he can cut down the 5 turnovers and shoot better than 3-12 from the field. What has happened with Henry Sims is nothing short of amazing this year.

Making The Freshman To Sophomore Leap Award:
Markel Starks. The future congressman is quietly having a really solid season. He is playing within the flow of the offense, handling any full court pressure, knocking down open shots and starting to control himself on the defensive end so he can stay on the floor. Very hopeful about Markel coming into Big East play.

Not Yet Making The Freshman To Sophomore Leap Award:
Nate Lubick. Still plenty of time for Thundersnow, but Georgetown needs to find ways for him to play down low and not out on the perimeter. The more time he spends in the paint, the more damage he can do on putbacks and on the offensive glass. That said, the kid is a great passer, has been playing really nice defense, and just needs to regain his mojo. Still very, very hopeful he's going to be a huge contributor in the brawny Big East.

Great Idea for Office Christmas Activity Award:
Cookie exchange. Everyone goes out and makes or buys a bunch of cookies and those participating get to pick various ones from the lot until all are gone? Yes, please. 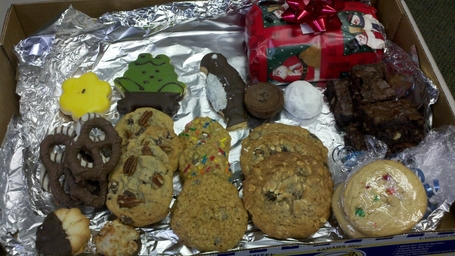 Show You Must Watch Award:
Homeland on Showtime. I just plowed through the 12 episode first season in 2 days. Spoiler Alert - It is f&*king awesome.

The Nadafinger! Award:
JT3. The normally calm Thompson was incensed and as fired up as I can remember in the opening minutes of the Memphis game as Cahill made one bad call after another. And perhaps this was a calculated move -- many people questioned if JT3s calm attitude rubbed off too strongly on his team, but the Hoyas and their coach came out amped up ready to play on Christmas eve's eve's eve.

Jelly of the Month Club Award for Disappointing Outcomes:
The Bench (while counting Otto as a starter). Another night where Sims stays out of foul trouble, another bullet dodged -- but with Nate struggling and Hopkins not seeing the floor, our interior remains very thin. While Trawick had a nice dribble-drive to drave a foul and looked comfortable in the offense, he and Whittington had only a marginal impact.

You'll Shoot Your Eye Out Award:
Any Christmas-themed post wouldn't be appropriate without a nod to 'A Christmas Story', the greatest Christmas movie ever made not called 'Scrooged.' This one goes to Memphis guard Will Barton, who in what appeared to be a blatant effort to impress the NBA scouts in attendance, took a number of bad shots and finished 3-10 from the field with 4 turnovers. #besuretodrinkyourovaltine.

Tim Gunn Fashion Award:
It has to be said - the Memphis throwback unis are awesome. Georgetown has some classy looking threads but just cannot compete with the Memphis gear. Big question remains - Georgetown is a Jordan school, is there any chance they break out the Concords for next game?

Justin Bieber Award for Dominant Xmas Musical Stylings:
Henry Sims and Jason Clark. Solid '12 Days of Christmas' carol came on the the big board during halftime, with various Georgetown athletes singing verses. Let me assure you that the majority of these athletes had horrific voices but they embraced the signing with both arms. Not to be outdone, Henry belted out FIVE GOLDEN RINGS and Jason broke it down a bit for the 'and a partridge in a pear tree' finale. Two thumbs up.

Bring It On Award:
On a night with a small (nearly non-existent) student section and no band, the Anacostia High School Marching Band brought it pretty strong. And their breakdancing/sign flipping crew brought it strong on some break dancing during halftime. Easily the best half time dance performance since the infamous 'Devil Went Down to Georgia'. 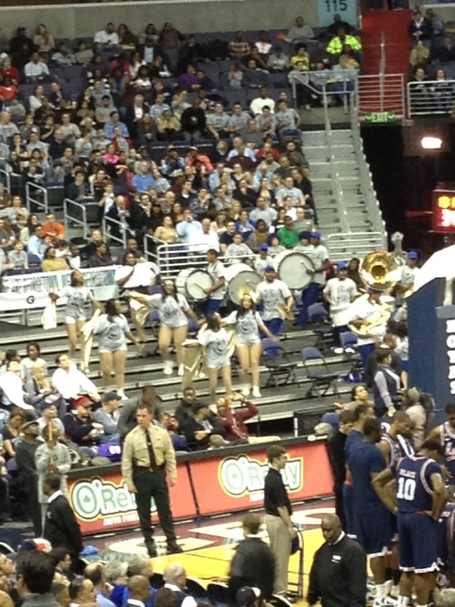 Robin Ficker Award for Excellent Heckling:
Everyone remembers Ficker for bringing it strong during Bullets games and reading 'The Jordan Rules' to MJ at one point. Well, the young alumni section did people proud with a boisterous OFF THE COURT chant at the young dandy, Josh Pastner (who will clearly be challenging Jay Wright for best dressed this year). The whole crowd picked up on it and the Phone Booth actually sounded pretty damn loud.

Old Balls Award:
Tony Romo. I counted on Tony Romo throughout the entire fantasy football season and for the most part he delivered, so I can't get too mad at him FOR BEING A COMPLETE NINNY YESTERDAY IN THE FANTASY FOOTBALL CHAMPIONSHIPS AND PUTTING UP A BIG FAT BAGEL AND COSTING ME A SUPERBOWL AFTER BREAKING A NAIL. GODAMMIT ROMO. Honorable mention: Norv Turner. It's no secret that the Chargers' turnaround over the past few weeks had a lot to do with feeding Ryan Mathews the ball 20+ times per game. So what did Turner dial up on his phone of shit after the Chargers fell behind early and often to the LIons? Mike Tolbert! That's right, the plodding chunkster who specializes in 1 yard plunges was on the field more than Mathews was, in early downs, passing downs, everything. THANKS FOR EVERYTHING, NORV!

So Cynical I'm Delusional Award:
We've railed against the promotions department quite a bit and even mocked the gatling gun costumes as they debuted this year. But let's be honest, the gatling gun is ridiculous but is here to stay and really brings people to their feet even if just to laugh. Why not embrace it with both arms and have an absurd costume, ranging from a pilgrim to an elf to Santa? Gonna be tough for promotions to come up with a good costume each time but we've bought in and are prepared to be entertained. On the flip side though, that Angry Birds thing is just an abomination (important note, the sponsor, Nando's sells the best chicken in DC) 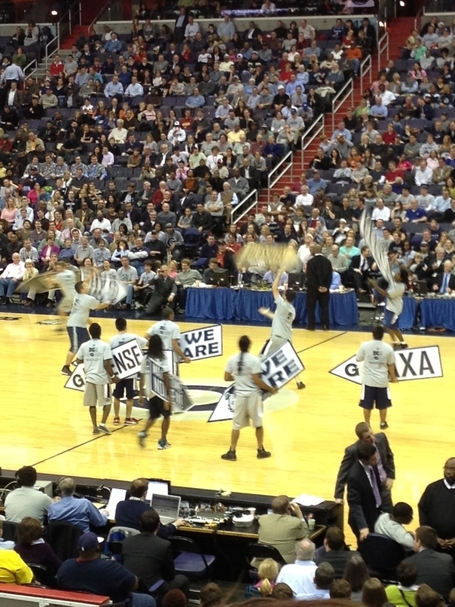 Ghost of Christmas Past Award:
Georgetown completed it's non-conference schedule with a record of 10-1 for the fifth year in a row. That's crazy.

Fair is Foul and Foul is Fair Award:
On the season, highly touted Memphis center Tarik Black has 41 rebounds and 39 personal fouls.

Hoya Fan Twitter Must Follow Award:
@nationwidenolan. I have yet to find a casual fan that knows the team, players, and the sport of basketball better than him. Every game I keep tabs on his feed and learn some new nugget of information.

Bunny Colvin Award:
I'm not sure what the deal is with Memphis, but this team of talented athletes needs a heavy dose of discipline and I'm not sure Pastner is the guy who is going to make them listen. The good news for Memphis is that even with a current record of 6-5, Memphis might not lose another game until March now that play begins in the grueling Conference USA.

L.A. Ink Award:
Greg Whittington. I'm a bit squeamish when it comes to tattoos, especially aggressive ones like this. To each his own, I suppose. I do, however, have a thing for chicks with tats. Not just hidden tats, but like full arm sleeves of tats and stuff.

Otto Porter Award for Filling the Boxscore:
Henry Sims. 12 points, 9 rebounds, 2 assists, 2 steals and 2 blocks for Sims. Just another day at the office for the best playmaking big man in the country.

The Grinch Who Stole Christmas Award:
The remarkable transformation of Sims got me thinking how much Georgetown is going to miss him next season and beyond, without a single legitimate post presence on the current roster or on the immediate horizon. If we just had one more year of this Sims and this Hollis and these freshmen, the Hoyas could be nasty. Alas, Sims and (likely) Hollis will move on and Georgetown will probably be fine, but Henry Sims has been one of the great Hoya stories of the past few years, and though the Hoyas are getting ready to take on the Big East and have the majority of the season in front of them, I'm already going to miss him, and this makes me sad. And being sad on Christmas isn't casual.

Those 1800 tequila ads with Chris Moltisanti

Can anyone watch those with a straight face?

woman 2 rows up has a baby.

worried about how our behavior may affect its development

Verizon event security keeps coming out to watch the sidelines

Like the legion of yuppies and the Anacostia band were ready to rush the court.

Triple chest bump with Sims, Markel & Clark after the dunk...

Have I mentioned I love this team? So much?

Open question: Does a 22oz bottle still count as "one beer"?

Our defense looks as good as it’s been in YEARS

I want to cheat on Newt Gingrich's wife with this team

Gratuitous Pic of Marisa Miller with some Victoria's Secret Friends of Hers in White Bikinis Award:
Indeed.