Sleeping with the Enemy: The Tigers of Memphis

Share All sharing options for: Sleeping with the Enemy: The Tigers of Memphis

Tomorrow night your Georgetown Hoyas take on the Memphis Tigers for the second time this season in what will be Georgetown's final game before Big East play begins against Louisville next Wednesday. Since the Memphis game at Verizon is the best non-conference home game we're going to get, we raised the bar here at THE GLOBAL PHENOMENON to make sure you have the best Memphis info possible. Special thanks this week to Gary Parrish of CBS Sports, perhaps the single greatest authority on Memphis hoops in the entire country, for providing answers to our hard-hitting questions. Mr. Parrish, this bud's for you. 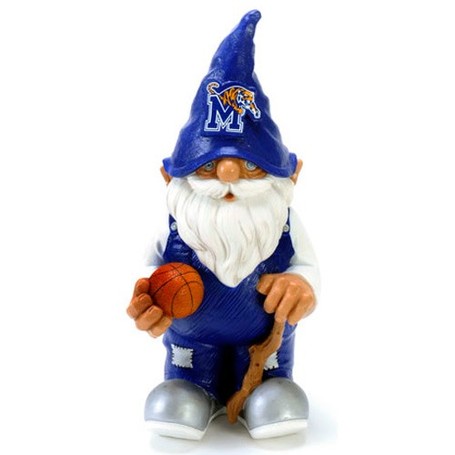 When Georgetown and Memphis played in the Maui Invitational, I was blown away by how unprepared the coaching staff seemed to be, especially late in the game. What is your view on Josh Pastner? Is he just a recruiter or will he develop some coaching chops?

Josh is young and still learning, obviously. But there's a reason N.C. State wanted him, and a reason why Memphis paid him $1.7 million per year to stay. It's because he's an unbelievable recruiter, a great marketer and a genuinely good guy whom people like. He convinced the city that Memphis Basketball wasn't just John Calipari. So the Tigers remain highly relevant in this city, and I think, ultimately, he'll be fine as the head of this program. You get good enough players, you'll usually win ... especially in Conference USA. And the one thing everybody agrees on is that Josh will get players well above the level of other C-USA programs.

More fun with Parrish after The Jump:

What is the ceiling for this year's Memphis team? Can they be a top 10 team? What is the worst case scenario for them?

Memphis has the talent to be a top-10 team, but the Tigers have already lost four of their marquee games, and that'll make it tough for them to get back to that place in the rankings this season. But I wouldn't put a ceiling on them. Again, they've got players. So they could accomplish anything in March if they get hot at the right time. Worst-case scenario? That would be another 10-6 season in C-USA. But I don't think that's happening. They're just too talented for that. The four losses look bad right now. But the truth is that all four are to currently ranked teams, and Memphis was in three of those games till the final minute. So this team isn't far off. At 6-4, Memphis is still probably one of the top 30 teams in the country.

Do you think Memphis will ultimately leave Conference USA when all the dust settles with conference realignment? We'd sure love to see them in the Big East.

Memphis would already be in the Big East if not for the football program being awful. So I think it's possible, sure. But folks around here have been talking about that forever and it's never worked out. I'm sort of in the I'll-believe-it-when-it-happens camp, at this point. But I do think Memphis makes a lot of sense for the Big East, and if I were the Big East I would've invited Memphis over SMU.

You've been covering Memphis for a while now. What was your most memorable moment watching the team? Who is the best player you've seen in a Memphis uniform outside of Derrick Rose? Who was the most overrated?

The most memorable moment was either Darius Washington missing those free throws with no time left in the 2005 C-USA tournament title game, or Kansas' Mario Chalmers hitting that 3-pointer at the buzzer to send the 2008 national title game to overtime. The former was the most gut-wrenching non-injury moment I've ever seen a player endure, the latter one of the greatest shots in NCAA tournament history.

On a related note, Memphis has a fairly remarkable basketball history, both for games and players - who would be your all time starting 5? 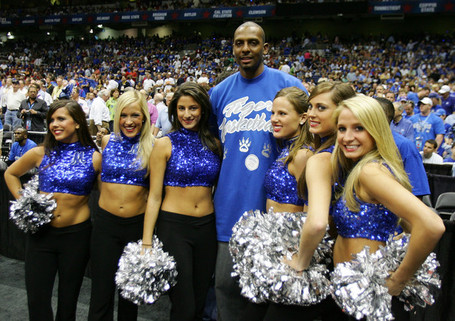 Who is a better writer - you or Jeff Goodman?

With you, Goodman, Jeff Borzello and Matt Norlander all at CBS Sports, which one of you gets to carry everyone else's bags on the CBS Sports charter flights? Who buys the first round at the bar?

Norlander and Borzello carry the bags, no question. I usually buy the first round. Because Goodman is cheap. And I just like being in control of my own tab.

What is your view on John Thompson III? Where does he rank as a tactician compared to the best coaches in college basketball? Do you think the offense he runs is used against him on the recruiting trail?

John's terrific. He's gone to five of the past six NCAA tournaments despite playing in a league that can easily eat up good teams. He's made Georgetown relevant again, and that's good for D.C. and for college basketball in general. Is his offense used against him? Of course it is. Everything is always used against anybody in recruiting. But he's still getting good players and still winning, and I don't think any negative recruiting is going to stop those two things.

When all is said and done, who will cut down the nets in New Orleans this year?

Has anything changed for this Memphis team since the Maui Invitational? Or should we expect the same athletic and turnover-prone squad?

They might turn it over still, but this is a different team. Will Barton is playing like an All-American and Josh has settled on his core. Chris Crawford and Adonis Thomas played just 15 and 23 minutes in an overtime game against Georgetown in Maui. They'll both play much more this time around, and Memphis is better with those two on the court.

If I told you that you would be having your last meal ever in Memphis, where are you going? What are you ordering?

I'd probably hit Interstate Barbeque and get the Barbeque Spaghetti. Or I'd try Gus's and grab some fried chicken. Best fried chicken in the world. Google it. It's unbelievable. 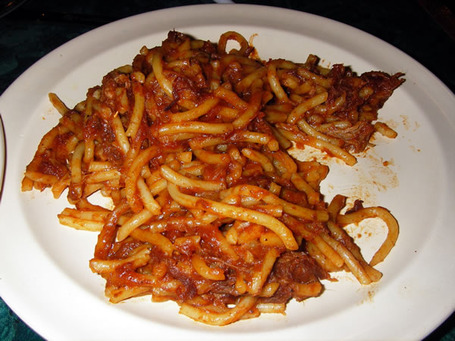 BBQ spaghetti at Interstate BBQ in Memphis. Documented. via www.ctff.org

Scale of 1-5 with 5 being most casual, how casual is Graceland? Favorite Elvis movie?

Graceland is something you need to see ... once. In my opinion, it's underwhelming. There are much better sites to see in Memphis. Sun Studio is really cool. The Civil Rights Museum is terrific. Graceland is just ... OK. Favorite Elvis movie? Would you believe I don't have one? I've never been into Elvis, honestly. I think he'd make a great American Idol candidate in the year 2011, but I've never thought he was one of the better talents coming out of Sun. Jerry Lee Lewis, Johnny Cash and Carl Perkins were all better talents. But Elvis was the star for a variety of reasons, and I get that. However, strictly in terms of music, he's not even top two or three from Sun, I don't think.

What is your prediction for the Memphis vs. Georgetown game? What is the final score?