The Morning After: How Bout Them Hoyas?

Share All sharing options for: The Morning After: How Bout Them Hoyas?

Georgetown Hoyas vs. Alabama Crimson Tide - Recap - December 01, 2011 - ESPN
"It was our third game against a team in the top 15," John Thompson said. "To come in and win against a team on their home court that's so well-coached, that's a big, big victory."

Last-Second Shot Pushes Hoyas Past Crimson Tide - Sports - The Hoya
"We're definitely not where we want to be, because it's the beginning of the season," Sims said. "We have a lot of things to improve on. But, the team plays hard, and that's a start."

Ballin' is a Habit: Friday's Shootaround: Georgetown notches another big win
There is a lot to like about this Georgetown team. Jason Clark has become a big-time scorer and a deadly clutch-shooter while Thompson is showing signs of growing into his massive potential as a scorer on the wing. But the biggest surprise has been Henry Sims, who is having a break out senior season, something that you rarely see. Sims finally started to take basketball seriously this summer, and he's become a legitimate threat in the low-post. His passing skills aren't surprising -- he showed them off last season, although I don't think anyone really expected him to lead the Hoyas in assists -- but what is surprising is that he is now a go-to option. Not only can he score with his back-to-the-basket, but he is hitting jumpers and driving to the rim from the perimeter.

Night Line: Sims, Georgetown Becoming a Surprise Force in the Big East " Rush The Court
As with any young team, some growing pains are expected. But Georgetown has yet to suffer any serious setbacks this season, a testament of Thompson’s coaching ability and his three upperclassman’s leadership skills. However, the Hoyas almost threw Thursday night’s game away, blowing a nine-point lead with 2:30 left before Thompson hit the huge game-winner. Georgetown has already built themselves an impressive early-season resume, but the true test for this team will come during the grueling Big East schedule. The Hoyas have struggled in Big East play in recent years, with 10-8 records the past two seasons despite being among the league favorites. They’ve also been upset in their first game of the NCAA Tournament in consecutive years. Only time will tell how this year’s surprising squad holds up when it matters most, but a fresh set of floor leaders looks to be creating their own identity for this up-and-coming team.

Backdoor working well - Georgetown Hoyas - CBSSports.com RapidReports
While the pregame focus was on Alabama’s highly ranked defense, Georgetown has been able to get good looks using its traditional backdoor cuts from the high post. Both G Jason Clark and F Otto Porter have found themselves free down the middle as the Crimson Tide’s defense faltered.

Hollywood! Georgetown 57, #12 Alabama 55 | Over the Hilltop
Georgetown’s win on Thursday had all the substance to support the most hard-headed thinking, but also the emotion that we all seek in sports. Our pulses raced, as Thompson’s incomparably gorgeous three fell softly through the net. We felt pride, seeing the next generation of Hoyas prove themselves in a difficult environment in front of a national audience.

Vox Populi " Postgame Roundup: Hoyas 57, Crimson Tide 55
After their statement win against Memphis in Maui, Coach Thompson noted that the Hoyas would not be able to excuse poor performances on their status as a young team for much longer. The Hoyas are well on their way to breaking that crutch, as this group showed a mature level of poise in the Coleman Coliseum’s first non-SEC sellout since 2003. The Crimson Tide faithful filled the arena with a capacity 15,383 person crowd, but Georgetown still became the first opponent to defeat Alabama in their house over an approximately two year span

Alabama Basketball Falls in Heartbreaker to Georgetown
By all means, Georgetown deserved to win the game, and outplayed the Crimson Tide for most of the game, but that doesn’t take the sting away from that loss.

Night Court: Hollis Thompson hit a big shot - CBSSports.com
Only two ranked teams -- No. 1 Kentucky and No. 12 Alabama -- played Thursday night, and the lower ranked of the two took a home loss on a buzzer-beating 3-pointer. The man responsible for the buzzer-beating 3-pointer was Georgetown's Hollis Thompson. He got the ball on the right wing and launched a deep jumper that swished with less than two seconds remaining to give the Hoyas a 57-55 win that could propel them into Sunday's Top 25 (and one). Georgetown is now 6-1 with wins over Memphis and Alabama. The lone loss came to No. 15 Kansas by four points.

Georgetown vs. Alabama: Hollis Thompson three-pointer gives Hoyas upset of No. 12 Crimson Tide - The Washington Post
"Hollis knew it was going in when we came out of the timeout," Thompson III said with a smile.

VIDEO: Highlights of Alabama basketball game against Georgetown | Capstone Report
Here is what Alabama basketball coach Anthony Grant had to say about the game in his post-game press conference. Quotes courtesy of UA Media Relations "Well, give Georgetown credit. I thought they played extremely well. Obviously there were some timely shots at the end. A big shot at the end won the game."

ATB: Entertaining SEC/Big East Challenge Deadlocked After One Night " Rush The Court
The Hoyas are playing better than anyone could have anticipated and have now defeated two top-15 teams (Memphis as well) while giving another (Kansas) all it wanted. Credit is deserving to John Thompson, III, who has fashioned another really good team after losing his stellar backcourt of Chris Wright and Austin Freeman to graduation last season.

Big East Morning Five: 12.02.11 Edition " Rush The Court
I would still say this team’s ceiling is probably a Sweet Sixteen appearance given their youth and lack of depth, but there are some talented young players on this Hoyas team, and Clark and Thompson are legitimate offensive threats and two of the better players in the conference. On a completely unrelated note, it baffles me that Georgetown freshman Otto Porter could play 35 minutes of basketball and only score two points, grab two rebounds, and dish one assist. Are we sure he really played 35 minutes? Did his teammates forget he was on the floor? 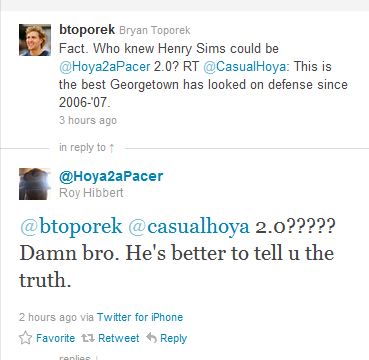