Sleeping With The Enemy: The Highlanders of NJIT

Share All sharing options for: Sleeping With The Enemy: The Highlanders of NJIT

Disclaimer: As you can understand it was very difficult to find someone from NJIT to engage us in a battle of wits to fill our usual Sleeping With The Enemy feature, so instead please enjoy these Fun Facts about the Highlanders! 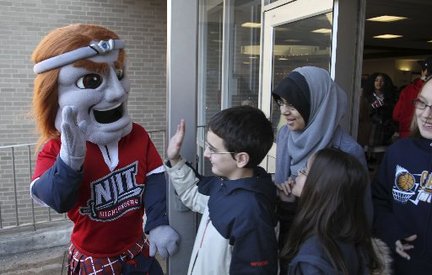 NJIT is located in an area known as University Heights, formerly known as the Newark Highlands. While classified under the former location, NJIT's mailing address used to be High Street, until it was renamed in memory of Dr. Martin Luther King, Jr. This reference to NJIT's past is what brought about the mascot The Highlander.

More Fun Facts after The Jump:

Fun Fact #2:
Don't I know this team from somewhere? Yes, you probably do!

NJIT‘s Men's basketball program set the record of the most winless team in D-I history in the 2007-2008 season with a losing streak of 51 games, breaking Sacramento State University's old D-I record. This acknowledgment has given NJIT's athletic program national recognition for futility. The unofficial NCAA record was set during its second NCAA Division 1 transitional season. It came despite a promising debut 5-24 Division 1 transitional season (2006-2007) whereby the rookie team won its first two matches (away and home). With a new head coach (Jim Engles), an entire new team of coaching staffs and additional new recruits, the NJIT Men's basketball team ended a 51-game losing streak on January 21, 2009 with a 61-51 win over the Bryant University Bulldogs ending the 2008-2009 season with a 1-30 record. The Highlanders improved the following season (2009-2010) and ended with a 10-21 record during its first official NCAA Division 1 season.

Fun Fact #3:
NJIT head coach Jim Engles has ties to Georgetown! His grandfather, Ken Engles, was both a player and coach for the Hoyas in the 1940s. Did I email Coach Engles to try to elicit some commentary on the matter? Yes. Did he respond? No.

Fun Fact #4:
NJIT Assistant Coach Ira Bowman is a former pro hoops player, having spent eight years in stints overseas, in the CBA, and cups of coffee with the Hawks and 76ers before a knee injury ended his career. Bowman initially played at Providence under Rick Barnes, and then thought wiser of it and transferred to Penn and played under Fran Dunphy where he was the Ivy League Player of the Year in ‘96.

Fun Fact #6:
The Hoyas will have a distinct height advantage in this one, as the Highlanders feature just one player over 6'8" in 6'10" junior center Sean McCarthy. McCarthy, whose write up on the NJIT Athletic site includes the following, "Tallest Highlander sees most of his action coming off the bench, as he works to refine his skills and improve his conditioning to compete for longer stretches at the Division I level," is not likely to be a factor against the Hoyas.

Fun Fact #8:
NJIT is located in Newark, New Jersey, which is also the home of Georgetown's Big East rival Seton Hall. NJIT recently unveiled its new $83 million Campus Center, which is impressive and also makes me fuming that Georgetown can't get an on-campus facility built.

Fun Fact #9:
Since 2007, NJIT researchers have trained hundreds of NJ teachers to use robots.