Share All sharing options for: The Casual Awards: American Heroes

During a weekend full of whacky sports results, the Georgetown Hoyas were able to conquer their little neighbors from American University on Saturday afternoon. The meat of Georgetown's season begins on Thursday when Memphis comes to town, but before we focus on the pesky Tigers, we gots to give out some awards.

As always we here at THE GLOBAL PHENOMENON are handing out hardware to those most deserving. Away we go...

Chris Wright Heart of a Champion Award:
Markel Starks. Starks led the Hoyas with 18 points on 6-8 shooting in a team high 32 minutes of action. Starks was the one starter who had yet to have a breakout game in non-conference play, and his 4-6 performance from three was an encouraging sign for the Hoyas, who now seem to have five legitimate scoring options (Hollis Thompson, Jason Clark, Henry Sims, Otto Porter, and Starks). This is good.

Turning Point Award:
Jason Clark. His steal and dunk at 42-33 put this game out of reach. So too did Otto Porter's last week against Howard. Too often in the last few years, Georgetown has fallen in love with its offense and forgotten about defense. This year has been different, but I still think this team should be forcing more turnovers and pressuring shooters more than they have. By February, this team should be DOMINATING fools on the defensive end.

That's A Bad Man Award:
Jabril Trawick. Dude just has an edge to him on the court. Did anyone else notice when Charles Hinkle mouthed off to Otto Porter early in the second half? Trawick gave him a look like "don't even think about it", and Hinkle seemed passive for the rest of the game. I would have no problem seeing Trawick get 20 minutes a game, especially as he continues to get more comfortable in the offense.

Focusing On The Wrong Team Award:
The UConn Huskies. Forget Syracuse, assorted media types. UConn is the best team in the Big East. Jeremy Lamb, Shabazz Napier, and Ryan Boatright make up arguably the best backcourt in America. And the frontcourt with Andre Drummond, Alex Oriakhi, Tyler Olander, and Roscoe Smith is just scratching the surface. I want nothing to do with them come tournament time.

The Georgetown Hoyas Are Ranked #16 In The Country Award:
Georgetown fans. Please, please, please fill up the Verizon Center on Thursday. This is a special young team that hasn't had more than 10,000 people in the gym to watch them play at home this season. Memphis needs a win very badly and will be pumped up for revenge after the Maui Invitational thriller. We can match their intensity with a rocking Phone Booth.

Lost In The Shuffle Award:
Markel Starks. Between Sims' resurgence, Hollis Thompson's improvement, and the freshmen excitement, Starks has been forgotten a bit. That said, he has really stepped into the starting point guard role this year, drastically improving his shot selection, command of the offense, and leadership. He will play a more prominent role as the new year turns, but the future is quite bright.

Casual Quote Award:
In the postgame presser, JT3 on Sims:
"He was best today -- and I told him this in the locker room -- at his communication on defense. The whole time, you heard Henry talking. And our defense got better in the second half because our talking got better. And he was, I thought, outstanding," the coach explained. "I heard Henry's voice calling screens, calling 'switch,' 'watch this.' And I think that's what he did better than anything. Better than the points. Better than the passes."

Bring It On Award:
Big ups to the Hoya cheerleaders for the casual Santa hats. I'm a sucker for Santa hats on ladies.

Bring It On 2 Award:
Aaron Bowen's the last scholarship player of the bench -- but he was the first onto the court to chest bump Markel after his three point tear in the first half and was going nuts on the bench during the Henry Sims rampage. Regardless if the rumors of Bowen possibly transferring become a reality, he has been a model teammate and deserves a lot of credit.

The Terminator Award:
Henry Sims. Hammering Hank is relentless and unstoppable. In a decisive 10 possession, four minute stretch at the start of the second half, Henry notched 4 straight assists, made a jumper, dunked in an alley-oop, converted a post move -- and was the first person to dive on the floor to force a turnover that went for easy buckets.

Tim Tebow Award For Awkward, But Mostly Effective Throwing Motion:
Otto Porter. On said play when Hank sacrificed his body, Otto collected the ball off the ground and in one awkward motion swung his arms over his head, and hurled the ball down the court on the money for an easy Hollis Thompson layup.

Old Friends Award:
Anyone who turned on the Kentucky game on Saturday caught a glimpse of former Hoya Omar Wattad as he represented the Mocs of Chattanooga. He's still getting his shots up (attempted 10 shots from 3).

Bjork at the Oscars Anti-Fashion Award:
The award for most horrific fashion statement goes to American coach Jeff Jones, who apparently forgot to put stays in the collar of his shirt. Huge pet peeve of mine, and distinctly amateur hour.

Old Balls Award:
Aaron Rodgers and Eli Manning. To those of you fantasy football folk out there fighting for your playoff lives and owned one of those QBs who led your team to regular season glory, you got an ass sandwich in Week 15 from those two guys. Rodgers wasn't terrible, netting 2 TDs, but for owners expecting his usual greatness against a woeful Chiefs team it was certainly disappointing. Interesting to note that in Week 15 last season, Rodgers missed the game with a concussion, once again leaving his owners with an ass sandwich.

Hoya Blues Award:
I understand that the non-conference home slate hasn't exactly included a sexy lineup consisting of Savannah State, NJIT, and Howard among others, but the student turnout has been deplorable. Yes, some students had finals on Saturday which might be more of an indictment of the Office of the Registrar for silly scheduling, but come on, man. Ted Leonsis promised us salt at Verizon Center and asked the students to show up in exchange, and that clearly didn't happen. 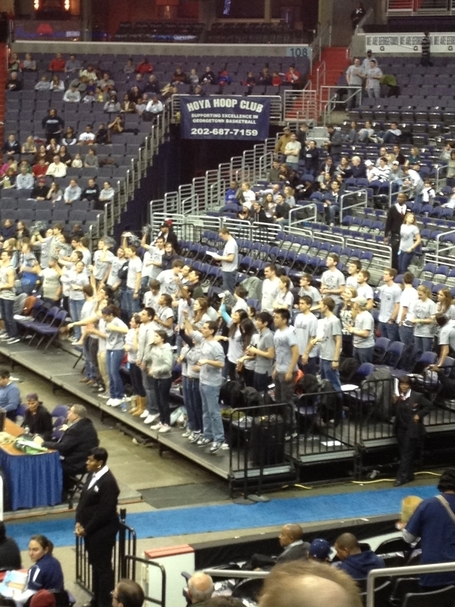 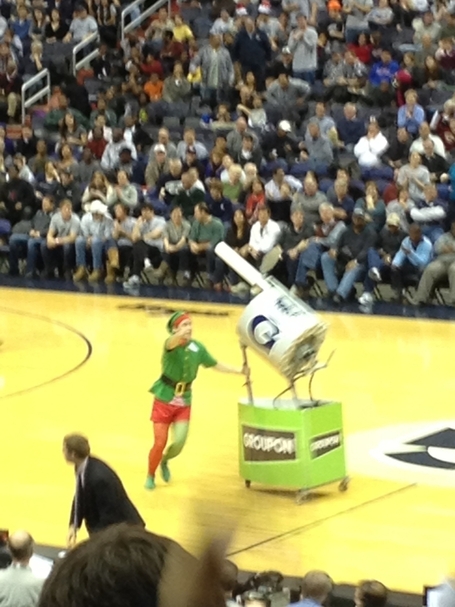 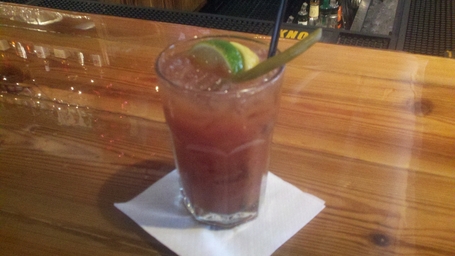 Otto Porter Award for Filling the Boxscore:
Henry Sims. 17 points, 3 rebounds, 6 assists and 2 blocks for the big fella, who demonstrated a nice array of post moves and deft passing. Never thought I'd ask this question, but is Henry Sims a legit NBA prospect? It can't be understated just how ridiculous and consistent Sims has been. Had he put that stat line up last year, I would have pooped my pants. But this year? Well, now I just expect it. Also, as a big man recruit, how could you not want to go to Georgetown after watching Sims' improvement?

Ted Leonsis Award for GETTING THINGS DONE:
Sure, Ted Leonsis answered our demands and blogged that he was putting salt in Verizon, but we sent out our intrepid casual spy to make sure Mr. Leonsis is a man of his word. The below is the result of a thorough examination of all concession areas in the concourse: 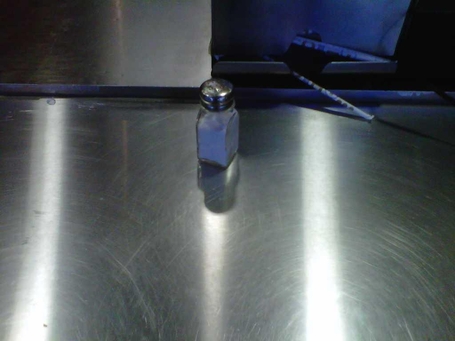 Lord Voldemort Award:
The Delusion Train has left the station and has been picking up steam as the Hoyas cruise into the showdown with Memphis, but Jason Clark may have left his shooting touch behind. His misfires are being nicely covered by the success of some others, but Clark was 1-5 from three against American, this on the heels of a 1-10 from the floor showing against Howard. I don't need to mention that something similar happened last season after his triumphant performance against Missouri, but I will.

Jim Nantz Award for In-Game Commentary:
Here are some golden nuggets from the Casual Gamethread:

I'm in a frickin final starting at 12:30. first home game I'll ever miss that I was on campus for.

We can't possibly lose to these clowns

can, we? Especially if we want to remain a nationally ranked hipster powerhouse.

Is anyone else kinda hoping that Hollis is rocking an all-out 60’s style afro by the time the BET rolls around?

How does he stack up against a freshman Hollis? Already a better defender, but not the same athlete or shooter. Plus he doesn’t have the half semester extra off practice that Hollis did. Seems like Hollis-level is his ceiling but I love where he is at right now.

"Basketball fights last two punches. Make sure you throw both of them." - John Thompson Jr.
Repping the SB Nation Product Team as Product Manager
Like SB Nation on Facebook and follow @SBNation and @SBNProductTeam on Twitter

I shake my finger.