The Casual Awards: Hoyas Defeat Howard and We Quickly Move On

Share All sharing options for: The Casual Awards: Hoyas Defeat Howard and We Quickly Move On

The Hoyas weren't all that impressive against Howard on Saturday, but a win is a win, and we're moving on to the next game. Before we start focusing on American, we're handing out hardware to those most deserving. Also, If Tim Tebow is God's quarterback, then this is God's Georgetown website. Away we go...

Chris Wright Heart of a Champion Award:
Otto Porter. Porter led the Hoyas with 13 points and 4 rebounds in 31 minutes of action. No single Hoya was truly impressive against the Bison, but it was Porter who was most consistent throughout and put the game out of reach with a steal and ferocious dunk in the final minutes. The dunk wasn't all that ferocious actually, but it went in at least which is nice for Georgetown.

Stop Dicking Around Award:
The Hoyas jumped out to a 17-0 lead in the first 8 minutes against Howard, featuring a stifling defense that forced Howard into a number of bad shots. Georgetown took its foot off the gas a bit too soon, however, and played the remainder of the game sluggishly. Even though Howard cut the lead to 2 points late, this outcome never really seemed in doubt as it seemed the Hoyas couple flip the switch at will. But thank goodness the Hoyas didn't lose because THE SEASON WOULD HAVE BEEN OVER.

Old Balls Award:
Cincinnati Bearcats. Get drilled by crosstown rival Xavier? Check. Embarrass yourself by throwing haymakers and stomping on dudes in the final seconds? Check. Have your head coach launch into a strong tirade denouncing your own players? Check. Suspend Yancy Gates a mere 6 games for crushing another kid's face when if that incident occurred off the court he would be in prison? Check.

Marlo Stanfield Award:
Xavier Musketeers. So these guys have a bunch of "gangsters" in their locker room and their team motto is "Zip ‘Em Up"? Wow, wouldn't want to run into these cats in an alley and certainly not in the NCAA Tournament. RIP Bodie.

Bizarre Award:
Jason Clark made just one field goal in ten attempts, 0 for 2 from three, but went 10-10 from the free throw line to finish with 12 points for the game, one shy of Porter's team-leading 13.

A Bit of Magic Award:
The Howard game was not pretty, not enjoyable, and not important. But ooooh lawdy that Markel Starks behind the back dipsyroo to Otto Porter for the flush! Be still my heart.

The NBA is Rigged Award:
The NBA. The way the league has handled the ongoing Chris Paul saga makes the NCAA look like the Bill and Melinda Gates Foundation.

AT&T Long Distance Award:
Georgetown was an impressive 1-13 from three point range, and seemed to settle for threes instead of pounding the ball inside and taking advantage of a distinct height advantage. Easy to do in a game in which the Hoyas never really seemed motivated after getting out to a huge lead, but the Hoyas could have used this game as an opportunity to work the inside game especially with Tyler Adams out indefinitely.

Get Well Soon Award:
Speaking of Tyler Adams, it's not clear at this point what's exactly wrong with the oft-injured big fella, but whatever it is let's hope he gets it worked out and can return to the court soon. 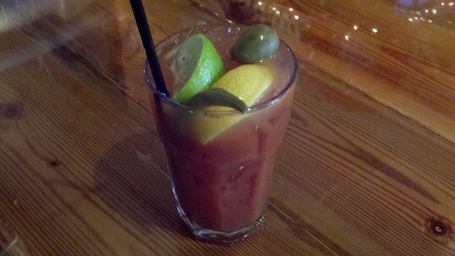 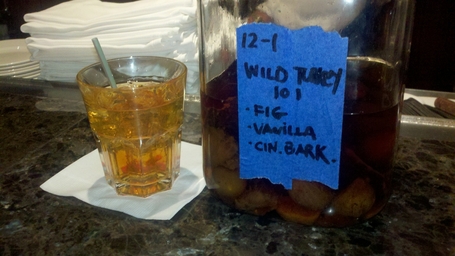 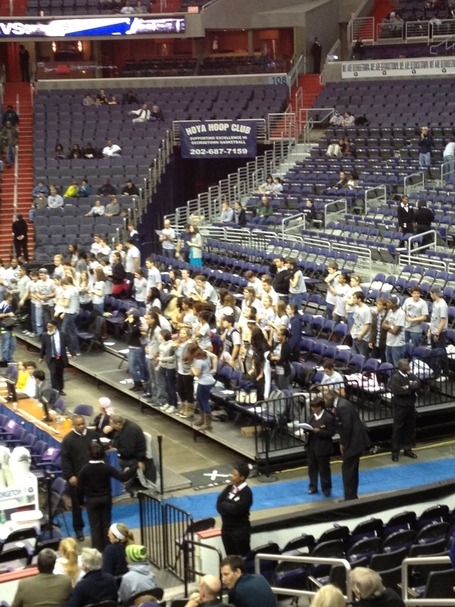 Ted Leonsis Award for Innovative Arena Food:
The Greene Turtle. Already a go-to concessionaire for Stella tallboys, why not saddle up with the pulled pork sliders, too? W-I-N.

The Nanny Bloomberg Award for Limiting Salt Intake:
Ted Leonsis. What's the one thing that need to be added to the fries accompanying the aforesaid Casual Pork Sliders? Salt! Yet none can be found in the concourse. I don't need more napkins dammit, I need delicious, delicious salt.

Dunk It, Dammit Award:
Otto Porter. Unclear how many times the Hoyas are going to realize that dunking the damn ball is an easier way to score than attempting wide open layups and missing them. Easily half a dozen blown layups or putbacks against the Bison.

Holiday Spirit Award:
Nothing quite says Happy Holidays like someone dressed up as a Christmas tree operating the t-shirt gun at Verizon. Salvage your dignity. 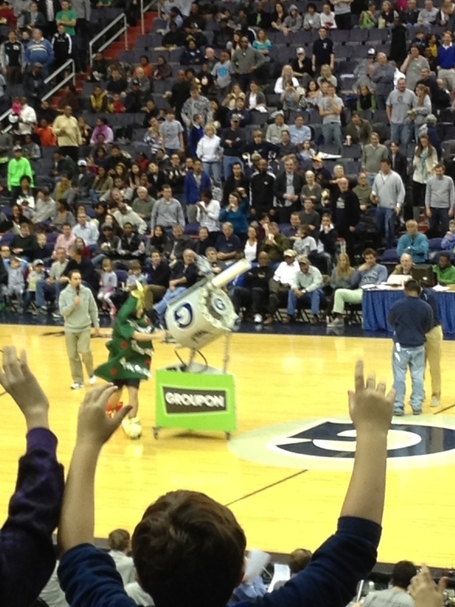 There might be as many people in the Verizon center

As there are posters in this game thread.

How much time needs to elapse

before we can start discussing the possibility of a shutout?

The two notable alumni that they listed

Up in the 400s, are 5 white kids with full body paint spelling "Bison".

Just saw one of my classmates in a crowdshot

With his kids. I feel old.

What is this sh*t

Has to remember who signs those paychecks

This is going to be a hell of a day

i was planning to show up to a thread full of merriment, documentation, and pictures of 80s tv stars/hot chicks/animals doing funny things

There is a $295 change fee on my ticket to New Orleans.

by RileysDressLikeAHoyaJersey on Dec 10, 2011 1:42 PM EST via mobile reply actions

Some sweetheart in Delaware committed credit card fraud on me too.

Gratuitous Pic of Kate Upton Struggling With Her Bikini Top On A Beach Award:
Indeed.