Share All sharing options for: The Casual Awards: Mahalo

Thanksgiving is over, but we here at THE GLOBAL PHENOMENON are still giving thanks to our fighting Hoyas for that riveting victory over Memphis that kicked off the long weekend.  As Sims-a-Mania has started to take over the world and the Delusion Train is now accepting all passengers, we're taking one final look at Georgetown's run through Maui and as usual we're handing out hardware to those most deserving. Away we go... 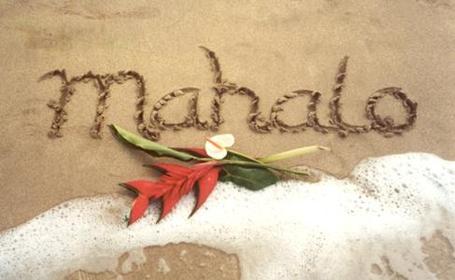 The Chris Wright Heart of a Champion Award:
Henry Sims.  What more can possibly be said about Henry's epic performance against Memphis?  The stat line is certainly impressive, but the Memphis game represented the first time is Henry's career that he became the focal point of the offense down the stretch, being fed the ball in crucial possession after crucial possession...and delivering on nearly all of them.  If Sims can capitalize on this performance and become a viable post threat for the Hoyas going forward, watch out.

Don Ho Award:
Listen, I've had the fortune of being able to frequent the islands of Hawaii many times and during those travels have purchased quite a few Aloha shirts.  I like Aloha shirts.  Aloha shirts are comfortable.  I never wear my Aloha shirts but have been rethinking that policy and may do so in the near future.  But Jimmy Dykes, the D-List announcer for ESPN2 that covered the Georgetown-Memphis game, had possibly the worst Aloha shirt I have ever seen. 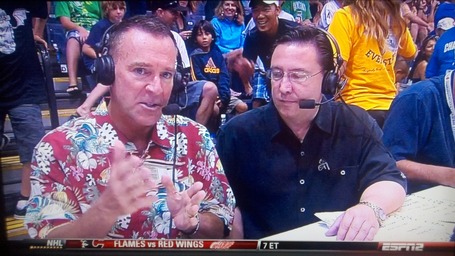 Dykes' broadcast partner blinded by horrific Aloha shirt as man in background laughs at it.

NBA All-Star Celebrity Game Coaching Staff Award:
Memphis' coaching staff. Ooooh look it's Peter Brady! And Luke Walton! And Damon Stoudamire! What an amazing collection of celebrities for this charity event. Oh wait, that's their actual coaching staff. Watching Memphis try to draw up a play to end the game in regulation would have been so painful had Georgetown not been playing them. Instead, it was hilarious and awesome.

Stewie Griffin Compliment Sandwich Award:
Nate Lubick. Nate, your goatee is nice. Nate, you were positively Nikita-like against Memphis. Nate, you are an integral member of this team and you will shake this off and regain your confidence.

Roy Hibbert Silly Fouls 40 Feet From The Basket Award:
Markel Starks. Our future congressman needs to understand that he is by far the best ballhandler on this team and has to be on the floor 25-30 minutes a game. Thus, the ridiculous reaching touch fouls 30-40 feet from the basket have to stop.  In each game thus far JT3 has had to remove Starks and turn to the bench early.

AAU Award:
Memphis Tigers.  So much talent, so much sloppy play.  I don't recall the last time I watched one of Georgetown's opponents have so many awful unforced turnovers.  Seemed like every time down the court a ball was flying out of bounds or bouncing off someone's hands.

Let The Kids Play Award:
Mikael Hopkins and Tyler Adams. During this non-conference slate, we'd like to see Hopkins and Adams each get 10 minutes so that they are more comfortable on the floor. Inevitably, there will be a game in February where both Sims and Lubick are in foul trouble and we'll need them, so let's get them more comfortable sooner rather than later. These freshmen are beyond their years, they will learn from their mistakes and be less and less tentative with more minutes. This theory has already paid dividends with Jabril Trawick.  I have a feeling both will see extensive action against IUPUI and Howard this week.

Guns n Roses November Rain Award:
Pessimistic Georgetown Hoya fans. Yes, we understand that the last few years have yielded great wins in November and December and painful losses in March. Yet, this is a new group, so let's enjoy watching this team grow. A win like the one against Memphis will do wonders for this young team's confidence, and any quality win will also help our tournament resume.

Billy Madison I Knew You Had It In You Award:
Henry Sims. Big Hank was everywhere against Memphis. He scored, he rebounded, he hustled, he passed, he blocked shots, he demanded the ball. Let's hope this great beginning to his senior season will kickstart Sims to an all conference type performance. I can't remember the fanbase ever rallying around someone like they've rallied around Sims, nothing would be sweeter.

Greg Monroe/Jeff Green Big East Freshman Of The Year Award:
Otto Porter. There is no doubt that Otto has been the most impressive freshman outside of Lexington, Kentucky thus far this year. In the Big East, he has completely outshined UConn's Andre Drummond, Syracuse's Rakeem Christmas, and Villanova's Tyrone Johnson.  I am so giddy about the Otto Porter era on the Hilltop that I can barely contain myself.

Defense Wins Championships Award:
Jason Clark. The man with the long arms was spectacular throughout Maui, providing steady senior leadership and crucial buckets at the most important times. That said, his perimeter defense is still lacking. He showed how much of a pest he can be on the defensive side on the last possession of overtime, but we need that kind of effort on every possession. He's still getting beat off the dribble WAY too much for Georgetown to be a truly effective defensive team.

Respect Your Elders Award:
Chris Wright, Austin Freeman, and Julian Vaughn. Every year we go through this silly process where we believe the outgoing players were the cause of Georgetown's shortcomings. In 2009, it was Jessie Sapp and DaJuan Summers. In 2010, some even thought it was Greg Monroe. Now, it is last year's seniors. Let's just appreciate them for their contributions and appreciate that college basketball is a cruel game where you're ultimately judged in a single elimination tournament. This is a new group, maybe we will end up with more tournament success, maybe we won't. But that takes nothing away from Wright, Freeman, and Vaughn's accomplishments.

Patrick Ewing Jr. Defensive Specialist Award:
Otto Porter -- on the final play, up three, do-it-all Otto was tasked with guarding Memphis' best shooter. Otto didn't give him a chance to put up a shot.

Kenner League Award for Prognostication:
The Global Phenomenon. If you're only just now jumping onto the bandwagon of the cohesive, high energy freshman class, you didn't read enough Casual Hoya. We spent most of the summer singing the praises of Otto Porter and co. during their summer stint as "The Tombs."

Henry Sims Award for reviving "Big Man U"
Henry Sims. Dear Recruits, if you were doubting Georgetown's ability to give big men the tools to succeed at the highest level, look no further than the recent praise heaping on Hank.  And holy shit we're going to miss Hank next year so if any elite 2012 or '13 big men are looking for a chance at serious playing time, give JT3 a call.

Horses Before the Wagon Award:
Among the things we know about Jabril Trawick, these two things might be the most certain: 1) he has great hops 2) he loves to throw down on people. And against Memphis he was alone on a fastbreak with a chance and he most definitely saw visions of himself on sportscenter. However, he was a step ahead of himself, bobbled the ball, and showed some considerable athleticism still getting the lay up in. But when the nerves calm down and he puts it all together, Jabril could be nasty.

Lord Voledemort Award:
Hate to derail the Delusion Train with a dose of Casual Cynicism, but this game reminded me a lot of the Missouri game last season.  High scoring, overtime affair with the Hoyas emerging victorious and a new option emerging on offense.  Last year it was Clark who led the Hoyas in OT and resulted in calls for a nickname for Georgetown's three top players in Freeman, Wright and Clark.  And now, we've got Sims possibly providing a third option to Clark and Hollis Thompson...and maybe even Otto Porter providing a fourth!  One game at a time, kids. 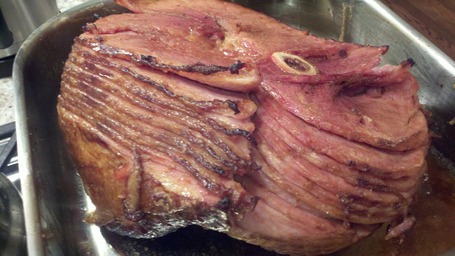 Hoya faithful coming thru loud and clear on broadcast

I wonder what Memphis does at practice other than scrimmage

HOLY SHIT OTTO IS SO GOOD

that steal and pass play by Otto was so pretty

High school ukulele band about to play for half time. Maui is the best.

Are not to be underestimated.

is conducting the delusional train straight to New Orleans
#Epicpartyatcasuals

and now its time for whiskey

I had to close my computer

because i can’t handle being around you people during a late&close situation.

BUT FUCK YEAH. Great win. We better be a nationally ranked powerhouse after this…