Please excuse this relatively abridged version of the greatest feature on the internet, but I'm still a tad groggy after last night's game against Kansas and my eyes are burning.  Before we set sail today against the Silverswords of Chaminade, we're handing out hardware to those most deserving.  Away we go... 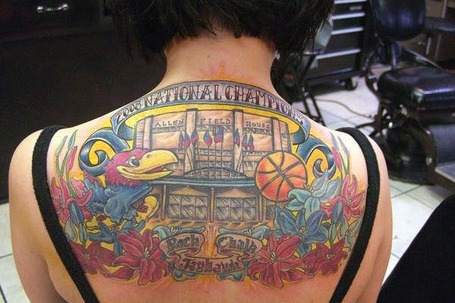 Chris Wright Heart of a Champion Award:Jason Clark. Hollis Thompson kept the Hoyas in the game early with a dazzling array of pretty threes, but it was Clark who had the Hoyas on the precipice of victory with his clutch play down the stretch.  Finishing with a team high 15 points, Clark put the Hoyas on his back in the final minutes, and nearly pulled this one off, reminding Hoya fans of his value to the team and providing a glimmer of hope that he'll be able to provide the senior leadership that the team will need as the season progresses.

Miss Kansas Award:The camera guy fell in love with this girl last night and that was fine by me.  If anyone knows who she is tell her she can reach us at 1-888-4CASUAL. 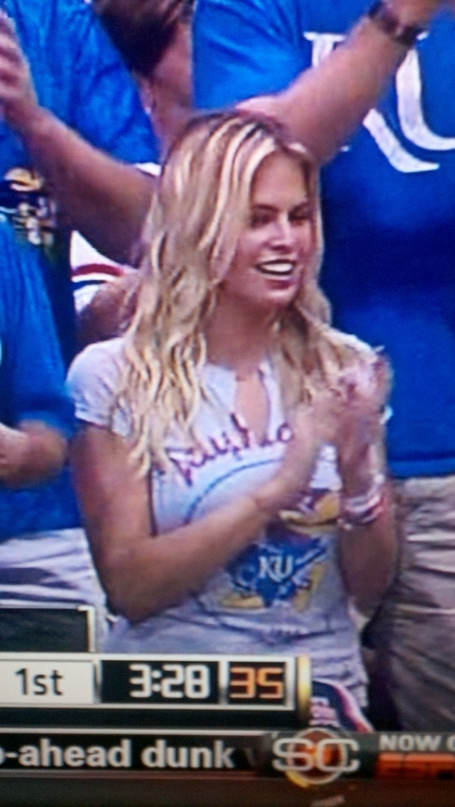 Dude is a Beast Award:Thomas Robinson, Kansas.  20 points and 12 boards for the Jayhawks forward, who will likely be playing for a number of years at the next level.  Robinson killed the Hoyas underneath, and his half a dozen dunks constantly revved up the partisan Kansas crowd that was audibly nervous.

Homeless Man's Cherokee Parks Award:Jeff Withey.  Withey fouled out in just 13 minutes of action and was a complete non-factor for Kansas.

Otto Porter Award for Filling the Boxscore:Otto Porter!  12 points, 5 rebounds to go along with a steal, a block, and an assist, Porter was all over the place last night and is making a seamless adjustment to the college game.  Kid plays like a seasoned vet out there and is already one of the only guys I actually trust with the ball.

McDonough Gymnasium Award:Lahaina Civic Center.  I had no idea the place only holds 2,500 fans.  Georgetown v. Kansas in a small gym?  Tremendous atmosphere.

Jekyll and Hyde Award:I want to root for Henry Sims so badly, I really do.  But his maddeningly inconsistent play is kicking my ass.  8 points and 6 boards isn't bad, but there was just something missing last night from Sims.  A bit sloppy with the ball and trying to force passes that weren't there, Sims still dove into the crowd after loose balls and is clearly trying out there.  He just needs to be a steady force for Georgetown, not a rollercoaster ride.  His improvement is still remarkable, but that just makes everything worse.  I love myself, but I also hate myself.  It's weird.

Old Balls Award:
Tom Brady and the New England Patriots offensive coaches who somehow managed to not target the NFL's leading receiver a single time in the 1st half and likely destroyed thousands of fantasy season's for innocent Wes Welker owners in the process.  2 catches for 22 yards at home against the Chiefs?  For shame!

Sky Miles Award:These Hoya fans, who made the voyage to the most isolated island chain in the Pacific to watch their beloved squad take on the Jayhawks.  Those flights ain't cheap. 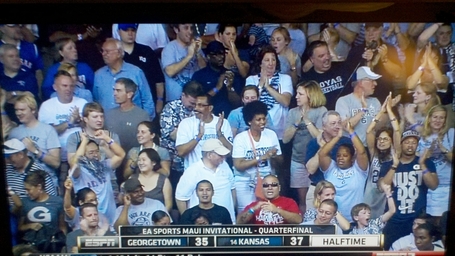 Socialism Award:7 out of the 9 Hoyas who saw action played over 22 minutes, an impressive stat given Georgetown's lack of bench contribution last season.  Gone are the days of Jerrelle Benimon being the first guy off the bench and THANK GOD FOR THAT.

The 'Yes, We Get It Jay Bilas The Hoyas Are Long, and Have Great Length Award for Being Long and Having Great Length":
Jay Bilas.

Under the Radar Award:
Nate Lubick.  Lubick doesn't get much glam because he never lights up the boxscore, but he is a rock out there.  Great defense, hustle, smart passes, I love this kid.  Stop shooting threes, of course, but otherwise fabu.

Adderral Award:To the millions and millions of Hoya fans who gathered 'round the Casual Gamethread and produced over one thousand comments during the game.  I'll have whatever you're having.

there is a girl on this blog?

does that mean i need to put on pants

Love the length. Love these freshmen. Fuck Dorothy and Kansas.

Hollis playing his way into the draft lotto

Otto is my homeboy.

Trust me, he has hated KU since birth. Showing true Missouri-native colors with his gameplay.

Nate Lubick is the damn biscuits.

and lit a cigarette

tomorrow is going to blow

we're doing a great job of keeping up the effort level

every time Kansas gets lazy we make them pay, we keep pushing them…

This shit should be "Casual Hoya PRESENTS SBNation."

Gratuitous Pic of Brooklyn Decker on a Beach That May or May Not Be on Maui Award:Indeed.