Share All sharing options for: T.J. Warren Commits to N.C. State Over Georgetown

According to multiple sources, family ties have won out today as T.J. Warren, a 6'7'' forward from Raleigh, North Carolina, has committed to attend North Carolina State over Georgetown University.  A consensus Top 25 player in the Class of 2012, Warren chose his home-state school where his father played in the 70's.  John Thompson III and his supporting cast again clawed their way into the final pairing despite being a considerable underdog. 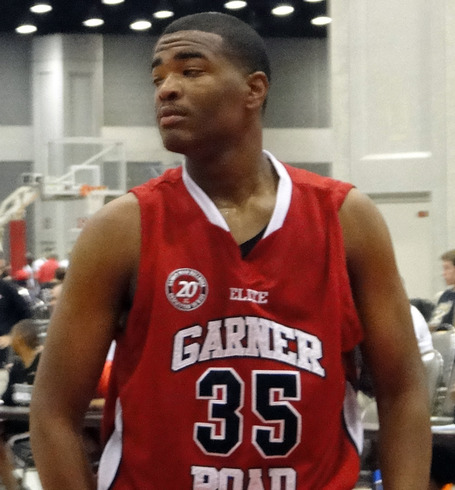 Warren has all the makings of a JT3 type of player, with a refined offensive game that includes impressive ball handling and perimeter skills for his size.  Though he won't bolster Georgetown's stable of tall and talented small forwards which already includes Otto Porter, Greg Whittington and perhaps Hollis Thompson next season, his decision could leave JT3 to go after a more pressing need: a big man.

More Warren After The Jump:

Unless Hollis Thompson heads to the NBA (or a transfer occurs), T.J. Warren would have commanded the final scholarship open for 2012.  If JT3 doesn't spend a scholarship on a true big man like Robert Upshaw, he'll be making a very bold bet that Moses Abraham, Tyler Adams, and an assortment of forwards can hold down the center position for the near future.

Despite losing out on Warren, there has to be optimism that elite recruits are consistently listing Georgetown up until the day of their decision.  In the backdrop of the devastating and blog consuming implosion of the Big East, JT3 has overcome the unbearable idiocy of John Marinatto and proved he can still recruit with anybody by bringing in a Rivals Top 25 player a little over two weeks ago (D'Vauntes Smith-Rivera, who is #22 on Rivals, committed on October 15th).

Moral of the story: open your wallets so we can get a damn practice facility that will push us over the top with elite recruits.