Share All sharing options for: The Casual Awards: Here Today, Gone To Maui

The Georgetown Hoyas opened its Maui Invitational journey with a convincing 86-45 basting of the UNC Greensboro Spartans last night.  For the Spartans, the magical run in the Maui Invitational ended with a thud on the floor of the Verizon Center, where the Hoyas improved to 2-0 on the season.  For the Hoyas, it's time to fuel the jets and pour the boat drinks, because Maui here we come!  Before we get on the plane, however, we're handing out some hardware to those most deserving.  Maui No Ka 'Oi, by the way, means Maui is the best.  It can also be applied to other things, like CasualHoya.com No Ka 'Oi, for example.  Away we go... 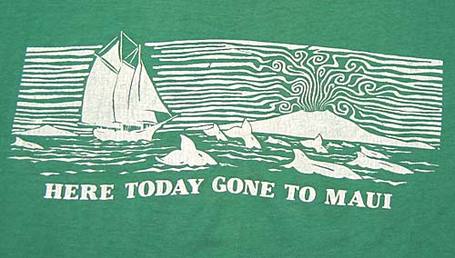 Chris Wright Heart of a Champion Award:
Hollis Thompson.  Hollis tied Jason Clark for the team lead with 19 points, and connected on 7-of-10 shots from the floor, including 5-of-6 from three-point land, while grabbing four rebounds in just 18 minutes to lead the Hoyas. The Hoyas controlled this game from the opening minute, and it was Hollis who came out of the gate flying and set the tone early with five quick points.

John Thompson Award for Coaching Excellence:
John Thompson III.  JT3 has done a very good job of integrating the freshmen thus far, as all of them have gotten plenty of burn in Georgetown's first two games.  Last night, Greg Whittington, Otto Porter, and Jabril Trawick led the team in minutes.  With Kenner League, the low-profile trip to China, and now these games, the kids have had plenty of time to mesh with the elders, which will be helpful with Kansas looming on the Pacific horizon.

The I Have No Problem With That Award:
I have no problem with Jabril Trawick's emphatic dunk at the buzzer to push the margin of victory to 41 points.  JT3 may have mentioned something to him after the game about it, but as a fan it's nice to see these guys step on opponents' throats, even if that opponent is UNC Greensboro.

The Glade Air Freshener Award:
This Georgetown team.  This team plays hard on both ends of the court, and the commitment to defense is a refreshing sight to behold.  Last night the Hoyas utliized their length on the perimeter to contest numerous passes , and Sims and Lubick muscled down low to impact a number of good looks.  These Hoyas may struggle for wins as the Big East schedule takes hold, but it won't be for lack of effort, and that's refreshing, much like Glade's apple cinnamon scented air freshener.

Chicago is My Kind of Town Award:
Theory in the great city of Chicago, IL might be the greatest Hoya bar in the history of the world. Over six TVs dedicated to Georgetown vs. UNC Greensboro on a night when the hated Packers were playing the hated Vikings on Monday Night Football?!?! The bar owner actually apologized to Hoyas fans for changing the sound from a 40 point blowout to MNF. And oh, free shots when the Hoyas break 40 points at the half, and 80 points for the game. If you are not a Theory for the next game, then you aren't living (in Chicago).

I Didn't Know I lived in Russia Award:
The Green Turtle concession stand at the Verizon Center. WHAT DO YOU MEAN YOU ARE OUT OF STELLA? I WILL SEE YOU IN HELL!

The Watered Down Crap Award:
Stella is to Europe what Bud Light is to America.  It's just that good, and definitely not worth going to TWO concession stands in search of it.

I know we have only played 2 games this season BUT.....

I have no idea how this will translate into wins or losses, but I think, top to bottom, this team has more raw talent than any we have had in a while. This in no way means they are the best team that we have had recently, but just compare this team to the 2007 final four team. The line up was Hibbert, Green, Sapp, Summers, and Wallace. Yes that line up is far better that what we have now. However after them we really only had 1 player on the bench (Ewing) that we could trust in the game. After him we had Crawford who never really did anything, Sead Dizdarevic who hit a 3 once every 6 games, Kenny Izzo who was a football player, Macklin as a freshman who couldn’t really add much, Rivers who played very good defense but was a liability on offense, Octavious Spann (does anyone but me remember him), and Marc Egerson who transferred to UD after the first semester yet still was our 7th leading scorer for the year.

This years starters may not be of the same caliber as that team, but when the shots are falling I feel we are at the very least competitive. And 2 of them probably would have even started on the 07 team (Clark over Sapp and Thompson over a Summers as a freshman) But where this team stands out is our depth on the bench which is something we haven’t had in a while. We have (in my mind) 5 players on the bench who can come in and contribute. In fact I think 4 of those players have the potential to start this year depending on how quickly they develop. I would take Trawick, Whittington, Porter, Hopkins, and Bowen over the bench from the 07 team 7 days a week and twice on Sundays.I am very very optimistic about this team and I know this season will have its disappointments, but we have an incredible amount of talent and depth. We might not have 3 big guns that can get 18 points a game but we have 6 or 7 that can get 10, which unless my math is off, is better.

That is why I was really happy to see us pressing people early and often, cus eventually they will tire out, but hopefully with our bench being as deep as it is, we wont.

Come on, Man Award:
To the technological masterminds behind guhoyas.com or CSTV or whatever the hell it is that stole my $10 for a "monthly pass" so that I could have the privilege of WATCHING Hoyas games that aren't broadcast in my neck of the woods.  The first half shenanigans against Savannah State in which the sound feed was a decade behind the live action was fixed by the time the game ended, so I was SURE that by the time this game tipped off that there wouldn't be any issues.  WRONG.  Listening to Chvotkin call the game is great, but staring at a dark screen for two hours can really make you question your purpose in life. 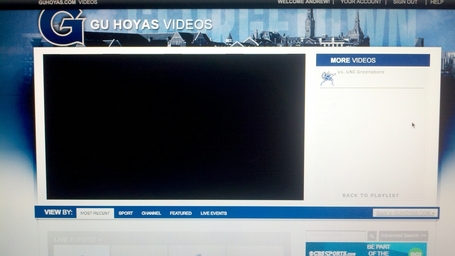 My life has no meaning.

Boots to Asses Award:
The Rock.  Flipped on WWE RAW last night since the Monday Night Football game was terrible, and caught The Rock make an electrifying appearance in Boston.  In addition to dominating the mic and controlling the crowd for over ten minutes with his usual array of catchphrases, The Rock told John Cena that Cena had lady parts, delivered a couple of Rock Bottoms to that Miz guy and left to a standing ovation.  Rock and Cena team up as a tag team at Survivor Series on Sunday, which will most certainly end with them turning on one another and setting up an epic clash down the road. Also, I am over 30 years old.

Casual Global Hoops Tour Award:
Looks like there will be a Casual Caravan heading from New Orleans to Baton Rouge tomorrow night to catch the Lady Hoyas in action against the LSU Tigers.  On Thursday, yours truly will be heading to NYC to catch St. John's in action against Arizona at Madison Square Garden.  All welcome.

Otto Porter Award:
This award, given to the Hoya that best fills the boxscore, goes to...Jason Clark!  Clark scored 19 points while attempting a whopping 18 shots (1-7 from three), and added 5 rebounds, 3 assists, and 3 steals in his 20 minutes of action.

Occupy Verizon Award:
Good to see Roy Hibbert and Jeff Green in attendance last night.  I assume this will happen a lot, especially considering Billy Hunter is a buffoon.  I mean at what point to the players kick back and realize that they get paid millions of dollars to play basketball for a third of the year and now they're holding out because they want more than 50% of the basketball related income?  I have no sympathy for these guys.  But yes, good to see Roy and Jeff at the game.

Old Balls Award:
Might as well rename this award the Jerry Sandusky Award.  What the hell was he doing last night being interviewed by Bob Costas on national television for?  Why not just march into the courtroom and scream "I'm guilty!"  This guy sickens me and gives me the jeepers creepers and the heebie jeebies.

Jim Nantz Comments of the Game Award:
Good work as always in the Casual Gamethread, here are some golden nuggets:

if this is part of Maui

do we get knocked out of the tournament if we lose tonight? And if not, what precisely is the point of this game being part of Maui? Raw deal indeed for our opponents.

Rich Chovtkin is the best

I don’t even need a MASN feed.

Can’t be sure, since I can’t see anything.

who will score more points tonight...

Took a roadtrip with the housemates up to pittsburgh. Go to a market on the Strip and run into big roy. We take a photo. Then hour later see him at Primanti Bros. 3 hours later, we see him again. He laughed and definitely thinks we’re stalking him. Now I’m 50 feet from him again. Too afraid to say hello for fear of restraining order.

caprio too shocked by rebound to hang onto ball

Booking my flights to New Orleans.

Gratuitous Pic of Kate Upton Wearing Next to Nothing on a Beach Award:
Indeed.

The Georgetown Hoyas are an undefeated not quite yet nationally ranked powerhouse.