Sleeping With The Enemy: The Spartans of UNC Greensboro

Share All sharing options for: Sleeping With The Enemy: The Spartans of UNC Greensboro

The undefeated Georgetown Hoyas take the court again tonight against UNC Greensboro, and as always we're bringing you everything you need to know about Georgetown's next opponent.  After ye GLOBAL PHENOMENON faithful trashed us for the answers given in this feature prior to the Savannah State game, we worked six overtimes to make sure this one lived up to our usual standards.  Special thanks to Steve Behr, the Sports Editor at the Watauga Democrat, for providing answers to our always intriguing questions. Mr. Behr, this Miller Lite is for you. Let's dance... 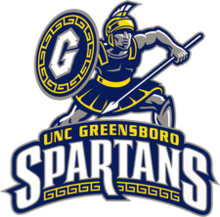 Aloysis Henry is a 6-10 center who averaged 9.5 points per game last year. He started in 28 games last year and had three double-doubles. He scored 26 points and had eight rebounds in a loss to Appalachian State. A pair of guards - Kyle Randall (5-11) and Korey Van Dussen (6-1) averaged 9.4 and 8.7 points per game respectively. They play at Tennessee on Nov. 11 and then at Georgetown on Nov. 14.

More fun with UNC Greensboro after The Jump:

I am a 17 year old North Carolina senior in high school, why am I going to Greensboro instead of Asheville or Wilmington? I assume there is no argument on Greensboro over Chapel Hill.

It will snow in Asheville, which folks who did not grow up in the stuff dread like they would dread seeing the dentist in Little Shop of Horrors. I've seen schools closed in the flatlands because of the threat of snow.
Wilmington has beautiful beaches around it, but hurricane season always leaves folks a little jumpy, except for the crazy surfers who ride the waves.

Greensboro strikes me as more of a metropolitan-type town. The Greensboro Coliseum has hosted the Carolina Hurricanes, the ACC Tournament, headlining concerts and other events I can't think of off the top of my head. UNC Greensboro also has played Duke and Clemson at the Coliseum, which the Spartans call home.

How is the Southern Conference looking this year? Where does UNC Greensboro stack up?

UNC Greensboro was picked to finish fourth in the SoCon North Division. Chattanooga was selected to win the North and Appalachian State second.

The team that I think we're not supposed to mention on this blog (Davidson) was picked to win the South DIvision. College of Charleston, coached by Bobby Cremins, is supposed to be second, but always seem to be the most athletic team in the conference. Plus Charleston is my favorite SoCon city to visit, even though that has nothing to do with anything at all.

Wofford won the SoCon Tournament the past two years, but went through some major graduation and was picked to finish fifth in the South.  Keep an eye on Appalachian State. OK, so I know I cover them for a living, but they get 6-10, 280-pound Ike Butts back for his senior year, 7-0 Rutgers transfer Brian Okam and sharp-shooing Rodney Milum, who made 8-of-12 3-point shots and scored 28 points in an exhibition win over Division II Lenoir-Rhyne.

Direct me to the best barbeque joint in Greensboro please.

I hear that Stamey's Barbecue is the best place in town. It's located near campus on High Point Road. Not sure about anywhere else. High Point Road has the usual chain tourist places and there's a sports bar that is about 2 blocks north, but I can't remember the name of the joint. I usually go to Hooters (because of the wings of course). 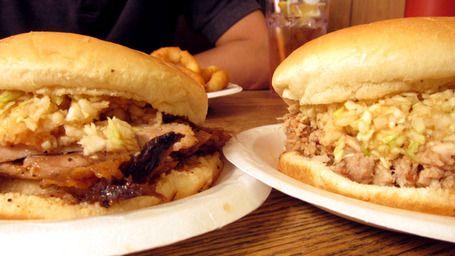 Doing a quick Wikipedia search, I am having a hard time distinguishing UNC Greensboro's most famous alumnus. Who do you think it is?

I checked other places and it seems that there is no obvious choice. Jeff Reynolds, the head men's basketball coach at Air Force, is a graduate and somebody I covered when I was in Monroe, N.C. and he was head coach at Division II Wingate. Reynolds is from Mountain City, Tenn., which is close to Boone. His Wingate teams played harder than any team I've covered, and I've been doing this for 22 years. He may not be the most famous, but he's a friend of mine.

Kyle Hines was one of the best basketball players to wear a jersey in the Southern Conference in my 12 years and is playing overseas. Virginia Foxx is the NC congresswoman from the fifth district (which includes Boone). Emmylou Harris, a well-known country singer, and NFL referee Gerald Austin are alums.

Who do you root for in the UNC - Duke rivalry?

I lean toward Duke, but I don't live or die by it. I'm originally from Colorado, so I pull for the Buffs. I found myself pulling for Butler to beat Duke in the NCAA finals a few years back anyway. After 12 years of covering mid-majors, and since I pull for teams like Colorado and my alma mater Northern Colorado, I tend to pull for the underdogs.

Who wins the NCAA championship this year?

From what I understand, it's North Carolina's to lose. I've been neck deep in football so far, especially with the FBS stuff at ASU (see next question) and with ASU trying to return to the playoffs, I haven't look at college hoops too much. I hear a lot about North Carolina, so I must apologize to all the ABCers (Anybody But Carolina) reading this and select the Tar Heels.

Do you care at all about conference realignment? Would UNC Greensboro consider joining the Big East?

I care about it a lot, because Appalachian State would like to move up to the FBS level, but NCAA rules state it must have conference affiliation in order before the move can made. Conference USA is generally regarded as the target, since it would have East Carolina and Marshall as rivals. UNC Charlotte and Old Dominion also want to move up, but neither is as ready as ASU.

As for UNC Greensboro, I'm figuring they don't have the budget. The Greensboro Coliseum is certainly a Big-East type facility, but they only drew around 8,000 for Clemson and less for other power conference programs. They also dropped its wrestling program in 2011. The Big East is much more than the Spartans can chew financially.

Give me the best case / worst case scenario for UNC Greensboro this year.

Best case, as with any program, is to make the NCAA Tournament. I don't see that in the cards, but I'm sure they'd settle for a first or second place finish in the North, which gives them a bye in the first round of the SoCon Tournament.

Worst-case is to finish dead last in the North and one-and-done in the tournament.

Unless Kyle Hines comes back, and brings some of his teammates from the pro leagues, it will be Georgetown by 30ish.