We're taking a bit of a break from the collapse of the Big East to take a look at Otto Porter, the most heralded of the Hoyas freshman class.  In case you've missed them, here are the player profiles for Tyler Adams and Greg Whittington.  Also, Casualhoya told me that if he had to choose between going to a Lil' Wayne concert or a LMFAO concert he would choose LMFAO very single time. 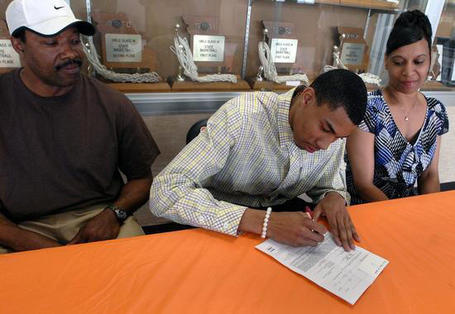 Look back:
Porter averaged a whopping 30pts and 12.5 rebounds while shooting 67% from the field last season, and spent most of the last three years embarrassing every PF/C in Missouri Class 1 on the way to three consecutive state championships.  The kid is no joke, and thrilled Hoya Nation when he chose Georgetown over Kansas and Missouri.

Expectations and Projections After The Jump:

Expectations:
Otto is going to see plenty of time on the floor this season. On paper, he's the best recruit JT3 has landed since Greg Monroe - and he similarly has all the tools to succeed in the Georgetown offense.  Thin and wiry, at 6'9 he can bring the ball up the floor, shoot from distance and possesses floor vision that you dream of for a point forward.  His feathery mid-range game (in Kenner League, he dropped in a few rainbow fall-away jumpers a la Austin Freeman) tops off a set of offensive tools that give plenty of hope that Otto will be have an excellent run on the Hilltop.  Bottom line: if you're not salivating over Otto Porter's career prospects, you have no soul (or it's been stripped bare by the fact that Otto will probably be squaring up against the St. Bonaventure Bonnies in conference play).

Projection (Cynical):
While Otto shows flashes of potential, his lack of assertiveness won't remedy Georgetown's struggles to put the ball in the basket. He length will lead to numerous steals, but that will be offset occasionally poor on ball defense where he can't stand his ground against stronger or faster players. He might struggle to hold his own on the boards at the four spot and isn't quite ready to be a triple threat on offense.

Projection (Delusional):
By time the calendar flips to 2012, there will be no question that Otto Porter is the best overall player on the Hoyas. He will jump seamlessly into the point forward role and his basketball savvy makes the entire team better, both offense and defensively.  If he shows the confidence to take multiple threes a game (and make a good percentage), it will open up his mid-range game and allow him to score in bursts.  An intense fan battle is waged to see who can create the wittiest sign "Otto" sign.