The Player Profiles train rolls on today with a look at another freshman, forward Tyler Adams.  In case you missed our profile of fellow freshman Greg Whittington, you can check that out right here.  Also, I think the guy who scheduled Monday Night Football games this year should be fired and that Lindsay Lohan needs to surround herself with better friends.  Away we go. 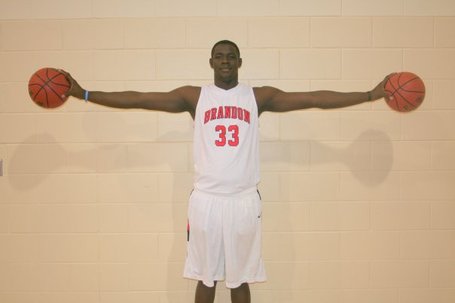 Look Back:
Early in 2010, Tyler Adams signed away his soul and committed to play for the Duke Blue Devils. But in a flash of brilliance that must have been divinely inspired, Adams decided to soldier on for the forces of good, decommitted from Duke, and committed to Georgetown soon after Midnight Madness. Breaking his deal with the Devils did not come without a price however, and the Mississippi big man plummeted in the rankings, dropping out of ESPN's Top 100 even though Rivals held him fairly steady at 62nd overall and the 6th best center in the country. It should be noted, however, that despite a successful senior year that landed him a spot in the inaugural "All American Championship" All-Star game, Adams reportedly battled knee injuries throughout high school.

Expectations and Predictions After The Jump:

Expectations:
At the start of the summer, Adams appeared to be battling for the back-end of center minutes while steadily improving his conditioning, skills and footwork. That all changed when Moses Ayegba went down during Kenner League play. Now left with only Henry Sims in the center position, the Hoyas must turn to Adams to plug a major hole in the middle. Mikael Hopkins and Nate Lubick don't have the frame necessary to hang with the biggest players in the league, and while Henry's length might be able make up for a lack of girth (get your heads out of the gutter people), that's not a given. Adams is the one man who can really bang down low (gutter again). However he entered and exited Kenner League with different injuries and wasn't able to play at all on the China trip, so even if he's healthy, conditioning could be a huge limiting factor (it's notable that he struggled to dunk with two hands in Kenner).

Tyler Adams proves to be the Hoya's best defender in the low block and helps anchors the Georgetown revitalization on defense. Henry Sims will start, rightfully so, and put together a highlight reel of weak side blocks, but when the Hoyas face a true back to the basket big man, Sims' slight frame will pressured into foul troubled or just straight overpowered. That's where Adams steps in. Listed at 6'9, 270 lbs (almost 40 pounds heavier than Henry) Tyler just presents a completely different type of problem for an offensive player. You just can't go through that type of mass. It's a natural defense, say, against a tight spin move – you might already be a half-step past Henry, but Adams still has a hip on you. His lateral quickness is close spaces is surprising, even if his leaping ability is limited (especially coming off injury). Don't expect much more than garbage points on offense (look for his footwork and condition improve later in career) but if the Hoyas hope to hang with elite teams, Adams will need to slow down their best interior threat.  Think Jahadi White but with more polish.

His body won't hold together. He started the summer with his arm in a sling and ended it with his foot in a boot. If that pattern holds, the worst case scenario of a player marked as injury prone with bad knees might be turn to reality: trapped in viscous cycle of being unable to stay healthy because of conditioning and unable to be in proper condition because he's not healthy. I hope you enjoy d'ing Andre Drummond in the post, Otto Porter.