Share All sharing options for: The Casual Awards: The Sky Isn't Falling...Yet

St. John's is a veteran team with a great coaching staff.  The Big East is a challenging conference, especially on the road.  These things were known before yesterday's game, yet it didn't stop a total meltdown by Georgetown fans last night.  The Big East is going to be a slugfest all year, there are going to be sweeping victories and demoralizing losses.  Hopefully, by the end of the year, this team is prepared for post-season play.  Onto the awards.

The Chris Wright Heart of a Champion Award:
Hollis Thompson.  On a night when all three of the Hoya Trinity members were cold, Hollis kept Georgetown in the game with 16 points, 7 rebounds and an impressive zero turnovers.  The emergence of Hollis as a viable fourth option on this team is a huge plus as opponents will continue to focus on shutting down Freeman, Wright, and Clark.  Honorable mention to Henry Sims, who was 3 for 3 from the field including a nice elbow jumper.  Sims' evolution continues to be one of the more surprising developments of the early season, and his minutes off the bench spelling Julian Vaughn  have been invaluable.

Aeropostale Award for Conference Play:
Georgetown Hoyas.  Remember 2010, back when we were beating up on the cream of the crop of the Southern Conference, Colonial Athletic Association, Big 12 and Conference USA?  We're also undefeated in the Eastern College Athletic Conference! Yeah, well how about winning games in the Big East? 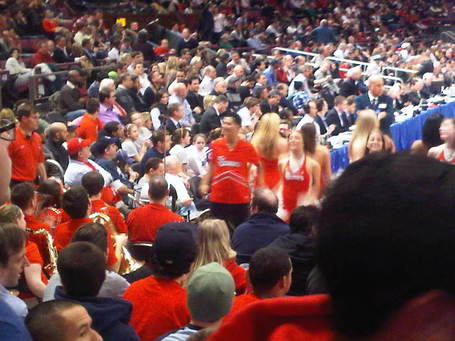 St. John's may have won the game last night, but in the battle of the Male Cheerleader, Georgetown will be the everlasting champion.  This clown was part of the dance team, but wasn't afforded pom poms.  He couldn't make it into the second level with his t-shirt toss, and his energy was severely lacking.  Even after graduating, our male cheerleader is still the class of the Big East.

Justin Bieber Award:
Georgetown Hoyas. Yes, there's an initial love affair that tempers as the beloved reaches middle age. The question now becomes whether the Hoyas can remake themselves quickly or if we're going to have to wait for a New Kids On The Block-Backstreet Boys style shot-in-the-dark comeback to end this season.

Welcome to the Internet Award:
Got home to find this gem sitting in my inbox:

GTOWN hasn't been the same since this guy left.Any wonder why jt3 teams underacheive?Because he didn't recruit this 2007 teams roster.Ever since,gtown has had soft followers like summers freeman and wright.The kind of﻿ pussies,who want to take the easy way out,and jack up 3's.Fire this fuckin moron,would you please?!

In an attempt to blow off steam, this internet tough guy decided to comment on our YouTube video of Jeff Green's game winning shot against Vanderbilt.  Really?  The internet consists of 1 billion trillion places to write about sports and this gent chose a YouTube video of a game from four years ago?

Georgetown Bloggers Are Idiots Award:
Remember that time how everyone was discussing how Lavin was a great recruiter but crappy in game coach?  Yeah, well Lavin just out-coached JT3.  He took advantage of soft defense and used the shot clock when Georgetown decided to run.  He obliterated the zone and took our best players out of the game.  This either makes Lavin a decent coach, or JT3 a crappy one.  Chose your own adventure on that one.

TCU Award for Casual Cheerleaders:
We wanted to give this award to St. Johns because, inexplicably, we thought we saw some pretty casual cheerleaders during last night's debacle, but there is NO RECORD of any upside on the Internet so it looks like this award will just have to go right back to TCU by default. 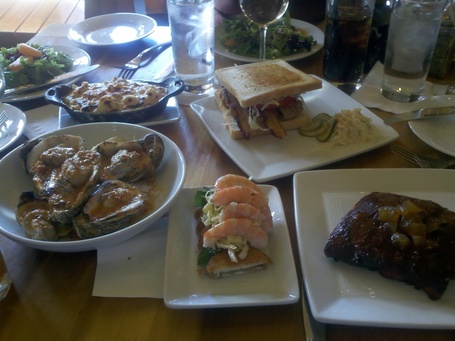 Is that an oyster and bacon sandwich?  Why yes.  Yes it is.

hoyasincebirth Delusion Award:
Only one team has won a Big East road game this season.

IJustTookShotsOfDraino Cynical Award:
DePaul and St. John's was supposed to be the easier part of our schedule.

Empire State of Mind Award:
Hollis Thompson.  I was at a New Year's Eve party where there was a pretty heated discussion about the merits, or lack thereof, of Thompson and Benimon.  I don't remember who was on which side, but whomever was bashing on Thompson: YOU ARE RETARDED.  In a grim fog of horrificness, the only bright spot was Thompson's 16 points.  Sims gets the runner up for this award, though he seemed to sag a bit in the second half.

Swagman Award:
That little expletive from St John's who Chris Wright elected not to box out and who instead grabbed a board from Vaughn and caused Vaughn to pick up foul 4. In a game where Julian generally came to play, that moment was emblematic of the entire game - St John's simply wanted it more.

We always wonder why he doesn’t call TOs in late-game situations — but it seems like the guys actually come out WORSE from the TO than if you just let them go for it.

Beta Male Award:
In a game screaming for one of the Hoya Trinity to step forward and assert himself to ensure a win, none seemed to have the combination of ability and fortitude to pull it off.  Jason Clark gave it a go but it was incumbent on Wright or Freeman to seize the reins. Unfortunately, both reverted to earlier years with Freeman settling for jumpers and Wright playing the wrecking ball role. The key to our early success was those two's continued growth. We need to regain that momentum.

Austin Powers Lost Mojo Award:
The best game in John Thompson III's reign at Georgetown was the Elite Eight victory over UNC.  After Jonathan Wallace hit the game tying three with about 30 seconds to go, UNC had one more possession to win the game.  Out of a timeout, JT3 subbed in Jeremiah Rivers to guard the ball, and he did an awesome job not letting Wayne Ellington get a quality shot off.  Last night, in a very similar scenario, JT3 left Jason Clark in to defend the ball, and we saw how that turned out.  The reality is that Clark is not a quality defender, no matter how long his arms are.  In situations like that going forward, it'd be nice to see Vee Sanford come in and play a role similar to Jeremiah's on the Final Four team.

Onions Award:
Jason Clark may have struggled on the defensive end, but hitting all four of his free throws in the final minute to give Georgetown the lead was impressive.  I have no problem with the ball in Clark's hands at the end of games.  Even during the fatal play where he stepped out of bounds, he was heady enough to put himself in that position and even made the difficult reverse as the ref blew his whistle.

Highlight Of The Night Award:
The game was painful, there is nothing great to take away.  But before the game, our resident Nervous Nelly, Jahidilikespie, was buying some pregame beers for a few Hoya brethren.  Time came to close out his tab, and the bartender made her way over to him with a quizzical look.  She asked, "Is this actually your card?  You don't look like an (girl's name)."  To which, he retorted, "It's my wife's card, I do it for the points."

Chicken Or The Egg Award:
Last night, The Hoya Trinity combined for 20 points on 7-25 shooting.  Georgetown will not win any games if that happens.  One can get all sorts of worked up about losing this game, but the reality is that if those guys shoot that poorly, we should get run out of the building.  Yet, we had a great chance to win last night's game.  So unless our guards really suck, which doesn't seem to be the case, there is reason for optimism.

That Boy Good Award:
Andrew Luck.  The Stanford QB emerged from the Orange Bowl as the best college QB I have seen since Peyton Manning.

Drown My Sorrows Award:
No. Not to drink but to watch some masterful counterprogramming – Intervention and The Biggest Loser.

Welcome Home Award, Part Deux:
Assistant Coach Robert Kirby, who came from Mississippi State.  Georgetown might have lost but at least there's a shred of decency in the program. Following the fight between Renardo Sidney and Elgin Bailey, the team reinstates Sidney and dumps Bailey? Just an awful statement about athletics in the SEC. What does Sidney have on these guys for that to happen?

Old Balls Award:
The New York Jets massueses who are suing Brett Favre for harrassment.  Give me a break, ladies.  I hope Favre takes these two harlots to court and makes sure they don't get a happy ending either.

The Going to Sleep With A Loaded Gun in our Mouth Award for Self-Hatred:
The Casualhoya.com bloggers.  We are reminded of the line in "Animal House" when the professor is being ignored and he pleads for sympathy: "I'm not joking, this is my job!"  Well this is our job.  We sit in our mother's basement, eating double-stuf oreos and writing this about a basketball team that is PLUNGING US INTO THE DEPTHS OF DESPAIR.  HOW DOES THIS HAPPEN?  A week ago!  A week ago!  Things were going so well.  And now we are 1-2 in conference play and have lost at St John's?  ARGH.  Yes, THIS IS OUR JOBS.  To blog about this catastrophe.  And there are miles to go before we sleep.