Sleeping With The Enemy: The Cardinals of Louisville

Share All sharing options for: Sleeping With The Enemy: The Cardinals of Louisville

Georgetown.  Louisville.  JT3.  Pitino.  ESPN.  Big Monday.  As the Hoyas take its next step towards the top of the Big East standings, we here at THE GLOBAL PHENOMENON are bringing you everything you need to know about Georgetown's next opponent.  Special thanks to my bros over at Card Chronicle, the baddest Louisville blog on the internet, for providing the answers to our always intrguing questions.  Card Chronicle, these mint juleps are for you.  By the way, feel free to click HERE for some casual Louisville upside in case your boss isn't around and/or you have no qualms about getting fired. 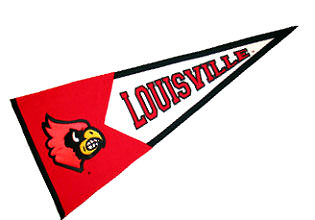 CH: Tell us about the new Yum Center. Have you guys been to any games? How does the atmosphere compare to the old stadium? Have you come up with a catchy nickname for it yet?

We gave the best answer to this question from the Villinova blog: "Freedom Hall was the cute girl with the great family who made being in a serious relationship unbelievably easy. The Yum Center is unfathomably hot and your friends are all very impressed, but she shops a bit too much and you have the sneaking suspicion that being married to her might not be as sexy as it appears to the outside world. Still, the benefits of the relationship are pretty self-explanatory."

The only thing I would add is that there was a movement to call it "The Bucket" but it never really took off. Mostly it is still "the arena" or "the new arena" or just "the downtown arena." Since we wrote that response, we've had two "Miracle on Main" comeback wins that are beginning to populate the all-time memorable games list, so you can overlook the $10 tacos, which is only a slight exaggeration.

As you mentioned, Louisville has had some pretty epic comebacks in the last few weeks, battling back down 18 with less than six minutes to go against Marquette and pulling one out against West Virginia last week. Do you see it as a positive that this team is very poised no matter the situation or a negative that they dig themselves into such difficult holes?

Obviously you'd rather not have to come back from double digits every game, especially in the NCAA tournament. We have a running joke on the blog that we'd rather be down five points at half than up five points, mainly because we have won a suspiciously large number of games when down exactly five points at half and come back and win. We also seem to lose games when we get a lead, like last year against both Nova at Freedom Hall and Cincinnati in the Big East tournament. But there is some truth to this: Pitino doesn't seem to make adjustments during the game, but seems to really do well adjusting in the locker room. And one of our biggest advantages is conditioning, so that seems to play a factor in these games. Finally, both Marquette and UConn spent the last 5 minutes of the game using the whole shot clock and taking a low percentage shot, which was a dumb strategy.

Louisville has a tough stretch coming, with 5 of the next 9 games against ranked opponents. What record in those 9 games would you be happy with?

9-0 or Pitino should be fired. Seriously though, I tend to be generally pessimistic (a clear self-defense mechanism) so I'm just hoping we .500 over these last 10 games (starting with Georgetown). 11-7 in the Big East with our non-conference resume is enough to get us a seed in the 5-8 range depending on which 5 we win. The way this season has been, beating the Syracuse, Pitt and Georgetown level teams but losing to Cincinnati, Providence and Rutgers level is just as likely as the other way around. Going 4-6 is the minimum to not have to worry about a spot in the tournament, and with games against Rutgers, DePaul and Providence at home on senior night, I think this is very doable.

We know about Preston Knowles, who seems to have been at Louisville for the better part of a decade, but who else on this team is going to hurt the Hoyas on Monday?

It really could be anyone. That's the beauty about this team, and the thing that drives us all nuts. Everyone, even Knowles, is capable of disappearing and being the superstar every game. I haven't watched Georgetown much this season so I don't know what the weakness is, but I'm assuming half court defense is not one of them. So I will tell you our consistent strengths: transition offense, and, uh....well pretty much just scoring in transition when given the opportunity. The only offensive play we run is the pick-and-roll, so if you can stop that, you don't have to worry about anyone. Terrance Jennings has been playing really well the last couple games, and obviously Peyton Siva had a career performance against UConn and the game-winner against West Virginia. If I were a Georgetown fan, I would worry most that Knowles and one of Kyle Kuric, Mike Marra or Chris Smith get hot from 3, and Siva has no trouble penetrating in the half court.

The Big East is in disarray right now, with Syracuse and Villanova losing to Seton Hall and Providence in the last week. Who emerges as the top four teams in the conference when all is said and done?

Pitt seems like they are in the driver's seat, but after that it is really hard to say. Notre Dame has a very favorable last 9 games and could easily go 6-3, which would put them at 12-6. UConn also should win the majority of their last 10. Nova could also easily go 8-2 over their last 10 for a 13-5 final record. So I think those 4 end up on top with the Cards, Hoyas, Marquette and Syracuse in some order in the 5-8 spots.

Has there been a change in how the fanbase treats Rick Pitino since the offseason scandal? Do you think it has affected his coaching at all?

Complete this sentence: If Louisville gets to [insert round] in the NCAA Tournament, this season will be a success.

I think typed and erased "Sweet 16" and "2nd round" about 10 times each. Pitino has never lost a Sweet 16 game in his career, so deep down, if we can get the right match-ups in the first two rounds....but that's crazy talk. I guess the easy answer is: this isn't a Elite 8/Final Four year. But ask me again after the next 5 games, although at that point no one will care and I don't think you'll publish an updated Q&A. (Casual note: You are correct, we won't.)

Both Earl Clark and Terrence Williams have really struggled in the NBA after being top 15 picks. Did you expect that to happen? Are their careers salvageable?

I don't really follow the NBA, so my thoughts should be taken with the appropriate amount of salt, but I never really expected Earl to do well in the pros. Earl was one of the most frustrating Cardinal players of all time because he had so much talent but never seemed to care enough to really harness it. Sure he basically put up a double-double his third and final season in red, but most of those games you'd be mad at him most of the time then look up and he had 19 and 11 and you were like, the hell? Anyway, he was never a consistent 3-point shooter and isn't big enough and never liked to bang down low, so I'm not sure where he fits in an NBA offense.

But T-Will had such a promising rookie season, I was expecting him to really turn some heads in his second year. I guess he clashed with Avery Johnson, but I'm surprised he was traded to Houston and then made to sit on the bench for the last few weeks. I just think T-Will needs to get more minutes and he could have a really good career.

In your mind, is this Rick Pitino's last stop in his career? How much longer do you expect him to stay at the helm?

He keeps saying this is his last job, but he also said he'd never coach in a downtown arena (which no one in the media has called him on) so who knows. He has two very good classes committed in 2011 and 2012, so that should help keep him here. I also think Calipari's success at UK and the potential NBA eligibility rule make things tough for him to go. At his age and at this point in his career, I don't think he goes back to the NBA and I don't think there's a "better" college basketball job. If UCLA fires Howland and then came calling, that would be the type of history + need for a turnaround + cool location that would be hard for him to pass up. Not sure if that would outweigh the perception of him "running from Calipari", but I think UCLA is my biggest worry.

Is any other team besides Kentucky considered a rival for Louisville? Anyone in the Big East?

We have written extensively on this subject (UK/UL rivalry analysis) for those who are bored at work or on Harbin 8 (Georgetown campus reference!), but the UK rivalry is more intense than anything Georgetown has or that we could develop with another Big East team. Cincinnati is a historical rival but there's not that day to day interaction that leads to hatred. Games with West Virginia and Marquette always seem to bring out the best in both teams. There are lots of mini-conference rivalries but nothing anywhere approaches UK.

I don't think I've watched more than 30 seconds of Hoya basketball this season, so I'm basing this entirely off last year's game and this season's Georgetown scores I literally just looked at. Freeman and Wright always seem to kill us, but it seems like depth is an issue. Coming off a double-OT, intense win at UConn, I can see us coming out flat and getting down, but unlike the last few games, Georgetown's defense and maturity won't let us back in it. Final score: Georgetown 68 - 58 Louisville.