The Casual Awards: Triumph On The Streets Of Philadelphia

Share All sharing options for: The Casual Awards: Triumph On The Streets Of Philadelphia

Just two weeks ago your Georgetown Hoyas were 12-5 (1-4), causing Casualties around the globe to question their very existence. But look at us now! After the win against the Villanova Wildcats, Georgetown is now 16-5 overall, 5-4 in the Big East, armed with a 4-game winning streak, and poised to make a run to the top of the standings. One of the teams standing in Georgetown's way, however, is Monday night's opponent, the Louisville Cardinals. But before we turn the page and move on to Louisville, we're handing out hardware to those who earned it in Philly. Away we go...

The Chris Wright Heart of a Champion Award:
Austin Freeman. What can we say about Freeman that already hasn't been said? Well, how about this: Freeman was the tits against Nova. THE TITS. 30 points? That's really good! Honorable Mention: Julian Vaughn's free throw shooting. Vaughn was 7 of 7 from the line in an unbelievably clutch performance. The Hoyas shot 16-17 from the line for the game, with only three Hoyas getting to the line in the entire game: Freeman connected on all 8 of his attempts, Vaughn on all 7 of his. The only miss was from Henry Sims.

How to Score ZERO POINTS Yet Avoid Wrath of Casual Hoya Award:
Chris Wright's defense. Lost in the shuffle of Freeman's majestic afternoon was Chris Wright's defensive performance against Nova's vaunted backcourt. Wright took only three attempts from the field, but never allowed Corey Fisher, Corey Stokes, or Malik Wayns to get into a groove offensively, consistently keeping them out of rhythm with excellent defensive intensity and hustle.

Casual Celebrity Spotting Award:
Kerry Kittles. All time leading scorer in Villanova history was at the game and apparently honored at halftime (I was on my way to find Magic Beer). Speaking of Magic Beer... 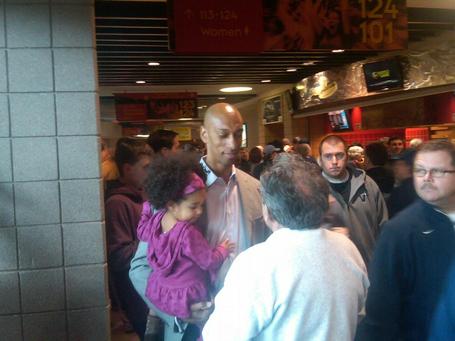 Awards for Next Casual Swag: 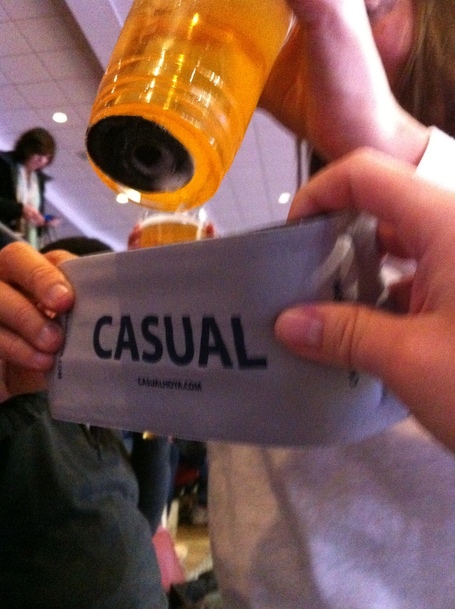 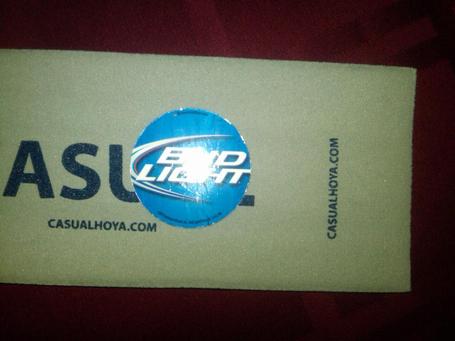 Magic Beer Magnets. Bring your own to the games.

Award for Supreme Casualness:
Riders of the THUNDERBUS. Never before has such a motley, vial, loud and drunk group gathered to watch their team from the nosebleeds. At one point, there was actually a drink game involving taking a swig for every road sign that was passed. DISASTER. Next trip: THUNDERPLANE to welcome TCU to the Big East (and stare at their cheerleaders). And kudos to Nova for putting us so high up that you couldn't tell the difference between an airball and swish. 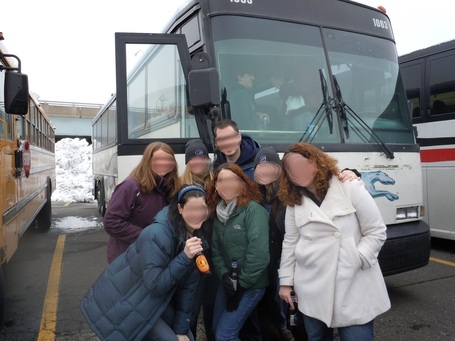 Casual ThunderBus rolled into Philly and dominated. And yes, those are chicks.

The Kids Are Alright Award:

Georgetown students and Hoya Blue. Holy shit, did you show up in force for that game. Parked next to the Casual ThunderBus were 5 or 6 yellow buses filled with passionate, face-painted students chanting Hoya Saxa while rolling through the arena parking lot. You were loud the entire game and certainly pissed off Nova Nation. 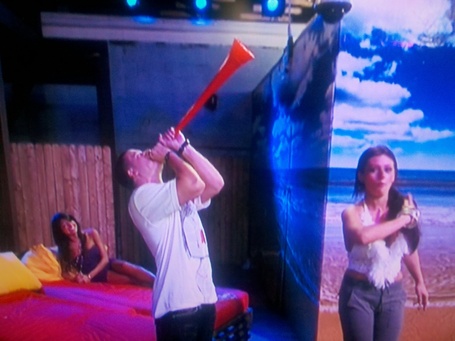 John Thompson III. Mad props to JT3 for sounding the alarms and making the lineup change that has seemingly (read: hopefully) turned around Georgetown's season. Nate Lubick has been a revelation at the 4 spot, providing toughness and the inside presence that the Hoyas desperately needed in the gritty Big East. Hollis Thompson has been effective as the 6th man, and deserves recognition for taking his "demotion" with class. Meanwhile, over in Seaside Heights, the boys on the Jersey Shore are dominating. Last week's episode might be the best of the three seasons, and next season's voyage to Italy already has me pumping my fist in delight.

The Whiz With Award:
Everyone knows that if you're going to Philly, you better go eat a damn cheesesteak. Everyone includes ESPN's Doris Burke, who offered this cringe worthy segment during a break in play. 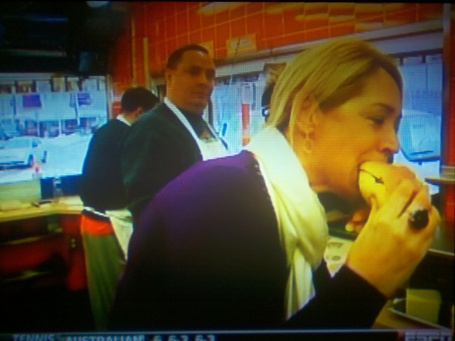 Doris Burke went to Geno's and grossed out America.

PHILADELPHIA — He’s just so casual about it.

Old Balls Award:
Duke Blue Devils. Someone needs to tell Duke to stop going on the road to play Big East opponents at the end of January. Last season the Hoyas laid the smackdown at Verizon, and today the Johnnies wiped the defending champs off the floor at MSG. Duke sucks. 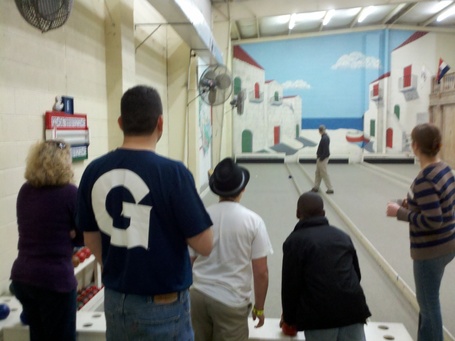 That kid in the hat was amazing at bocce. Like, really amazing. 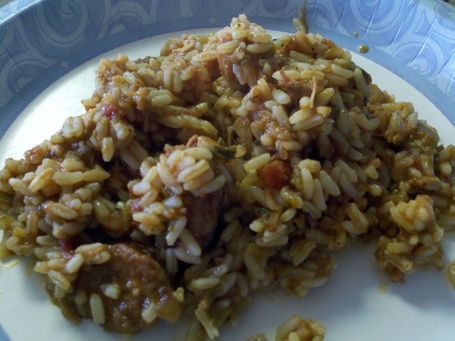 Men's Wearhouse Award for Worst Dressed:
Jay Wright. Yes, we are aware that it was the annual Coaches for Cancer weekend so everybody has to wear sneakers. But was it really appropriate for Jay Wright, noted clotheshorse and Foppish Dandy, to downgrade all the way to his pajamas for the game? He looked like he just got off a bus. Apparently there was a special sale at Bobby Huggins' Big And Tall and Wright took advantage of the friends and family discount to secure jumpsuits for him and his coaching staff. Shame on you Jay Wright. Nova deserve to lose just for that awful fashion statement.

The Donald Trump "You're Fired!" Award:
Kudos to the ESPN producer who thought it was a good idea to give the rest of the country a glimpse of yet another Kemba Walker bad shot at the end of a game while those interested in the Georgetown Villanova game THAT THEY HAD BEEN WATCHING FOR TWO HOURS missed nearly one minute of game time with under 5 minutes left in which Nova cut Georgetown's lead from 9 to 2. Jerk.

The Future's So Bright, I Gotta Wear Shades Award:
For a few minutes the Hoyas had Markel Starks, Hollis Thompson, Nate Lubick, and Henry Sims on the floor with Freeman, and the young Hoyas held their own against Nova during a key stretch in the first half. Sub Jason Clark for Freeman in there and that's next year's starting lineup, folks.

Celebratory Drink Award:
Makers Manhattan on the rocks at the Philadelphia Ritz Carlton. For the more discerning Georgetown fan who would rather not ride a vomit-soaked bus, filled with empty Four Loko cans after a conference road win in Philadelphia, might we suggest the Ritz Carlton? The lobby bar is in an opulent former bank, with a soaring rotunda and skylight. 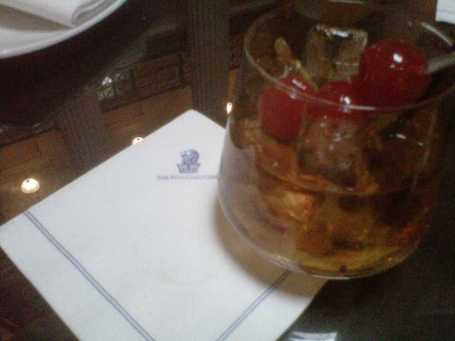 Jim Nantz Commenters of the Game Award:
The gamethread was ablaze in witty splendor yesterday, so here are a smattering of the casual offerings:

by BeerBottlesToTheFaceOfSyracuseFans on Jan 29, 2011 11:35 AM EST reply actions

Jay Wright has gone from power player to golf dad.

I liked it when I could just watch a game and just be despondent.

It needs to be said:

Got up this morning, ate his cereal

And said, "I think I’m going to make a ton of free throws."

And then he did, children. He did.

What happened during that GD UConn look-in?

Jay should wear his wrinkled pajamas every game 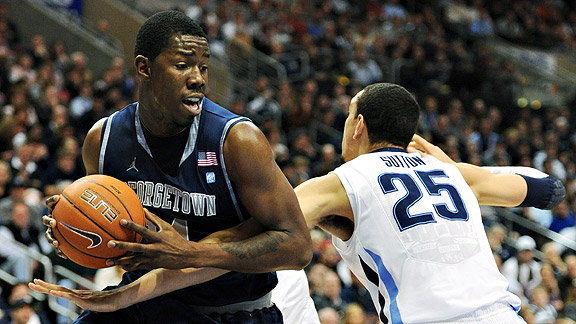 Great day to be a Hoya. We’re back!

John Thompson III Award for Horrible Usage of Timeouts:
Jay Wright. Nova ran out of timeouts with 7 minutes left in the game. What the hell was he thinking?!?!

Speaking of Timeouts, Award:
The ESPN broadcast made a big deal that Georgetown and Villanova each had no timeouts left during crunch time, yet on TWO OCCASIONS Jay Wright and the Dandies were given a chance to huddle during stoppages of play that shouldn't have existed. The lesson, as always, cheaters never win. 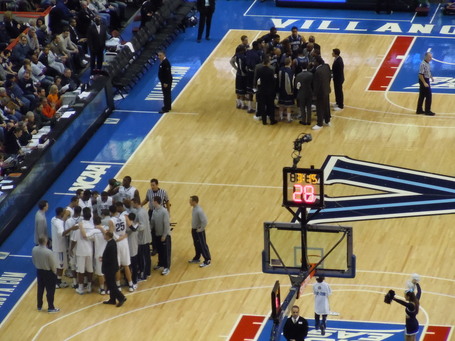 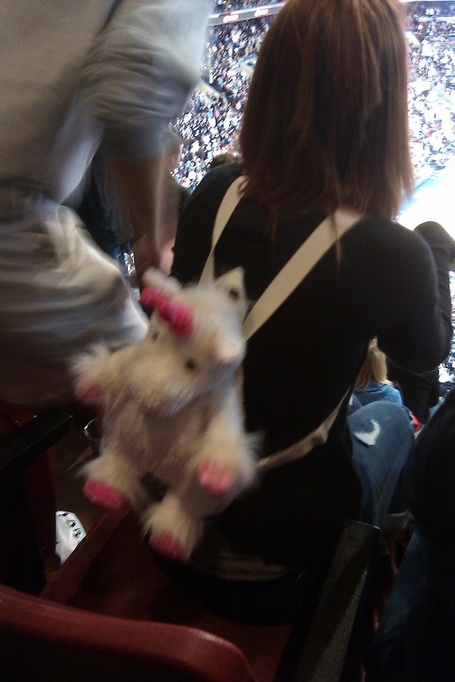 Villanova fans love backpacks, unicorns, and backpacks that have unicorns on them. 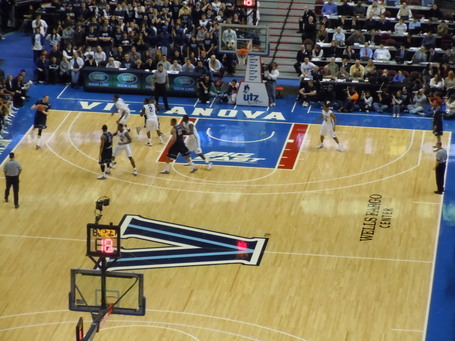 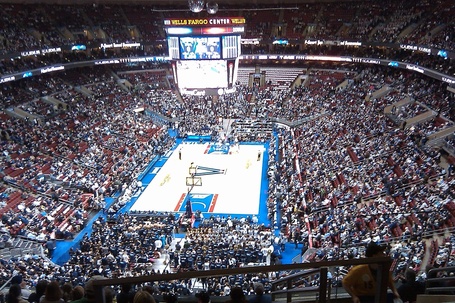 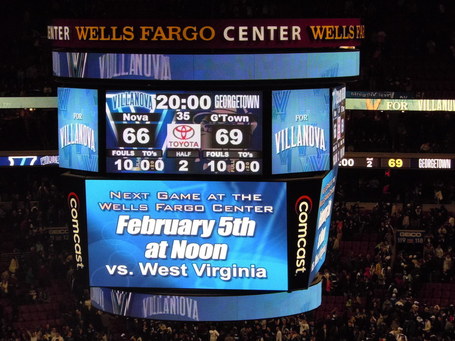 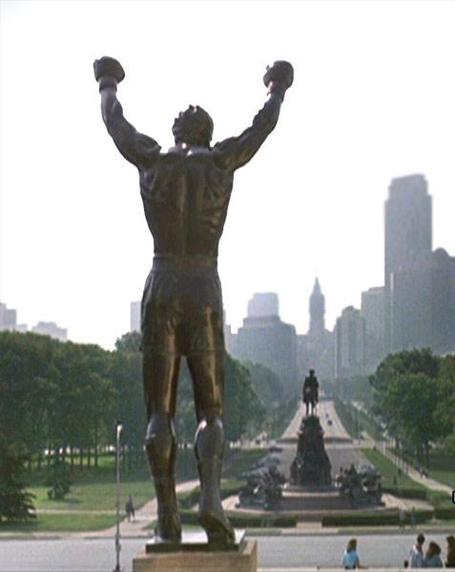