The Casual Awards: Hoyas Knock the Wind Out of the Red Storm

Share All sharing options for: The Casual Awards: Hoyas Knock the Wind Out of the Red Storm

Make no doubt about it, Georgetown loves the snow.  Not the type of snow Villanova players liked; I'm talking hardcore, unadulterated, white precipitation that shuts down an entire region and inspires the basketball team to throttle opponents.  First Duke, then Villanova, now St. John's - all wins by double digit margins.  LET IT SNOW, ALL THE DAMN TIME.  As always, we here at THE GLOBAL PHENOMENON are handing out hardware to those most deserving.  Away we go...

The Chris Wright Heart of a Champion Award:
Hollis Thompson.  First game of the season he is not in the starting lineup and he responds with 15 points and 6 rebounds in 18 minutes of play.  And he had a monstrous dunk that knocked out power to 400,000 Virginia residents.  Runner-up to Jason Clark for going perfect from the field.

Not at all a Technical Foul Award:
Hollis Thompson, again.  Another award for the dunk, doing a pull up on the rim and almost KICKING THE BOTTOM OF THE BACKBOARD. Nice job setting the tone for the game.  And, as BIAH points out, getting revenge for being posterized at Memphis.

The Award For a City That Handles Snow About as Well As Georgetown Handles a Zone Award:
Washington DC. To be honest, this doesn't even need awarding. But let's dwell on this for a bit. Washington got a few inches of snow last night. Do you know the result? ARMAGEDDON. And not some clever play on that like Snowmageddon or Snowpacalypse. It was just some snow and the reaction of the town was incapacitation. Oh, do you live in Dupont Circle and would you like to attend the game? HOPE YOU LEFT AT THREE IN THE AFTERNOON! Did you enjoy the game and would like to get home to Capitol Hill? WELL YOU BETTER WALK, SUCKER! This is not hyperbole. THE PRESIDENT HIMSELF COULD NOT GET HOME! No wonder the Russians won the Cold War and the Moon is owned by the Red Chinese.

True Believer Award:Student sections and band. No clue how you all got to the game but even though seriously short-handed, you guys were consistently noisy and even got a nice HOYA-SAXA chant going. It's easy to see the team feed off that energy. An overall impressive showing by fans as the Metro (predictably) became a nightmare to get to the game and we even had a substitute in game promo guy.

The Award for Proving the Big East is the THUNDERDOME of Basketball Conferences Award:The Providence Friars. Did you happen to see scores from around the conference last night? The Providence Friars, the same team that beat the YALE FREAKING BULLDOGS by three points, absolutely demolished Villanova last night by 15 points. This is clearly a joke. A horrible, horrible joke. Until I tell you that the night before Seton Hall beat Syracuse, IN THE CARRIER DOME, by something like forty. Madness. All of that is madness. Let me tell you how the Big East will shake out. Georgetown will lose to South Florida by 47 points. But then Austin Freeman, with no one else but a Hollis Thompson on crutches, will beat Pitt in the Big East semifinals 62-59, only to lose in the conference championship game to Jeremy Hazell's MOM by a buzzer-beating dunk. Does that sound unlikely to you? It is surely no more unlikely than Jay Wright losing a game at Dunkin' Donuts Arena. WELL THAT JUST HAPPENED. So get ready.

Vinny the Microwave Award:Shocking all in the gym, Coach Thompson shuffles the lineup and Nate Lubick gets the start. While Lubick played a solid game (though passing still needs work), Hollis put in work. His highlight reel dunk to end the first half brought the house down but consistently hitting open 3s and battling for tough rebounds is precisely what we've needed off the bench.

Acknowledgement of Existence Award:
Gene Keady.  Thanks to tremendous scouting (or linking) by glackensghost, I was able to get through the comb-over and into the head of St. John's special assistant Gene Keady when I told him he needed a different color notebook after St. John's went into the locker room down at the half.  The painfully bald one looked up from the tunnel and smiled.  I am King of the World.

Wait - You Mean He Can Play?
John Caprio. A crossover and strong attack at the end of the game? Well done, young man. We at CasualHoya salute any and all walk-ons who shoot the damn ball and freaking someone off the dribble gets you an award

They're Real and They're Spectacular Award:
Gene Keady. Dude has to know that everyone is pointing and laughing at the combover but up close, it's truly something to behold. Michael Jordan made the bald head cool but Keady kicks it old school and represents with a real live combover. Props 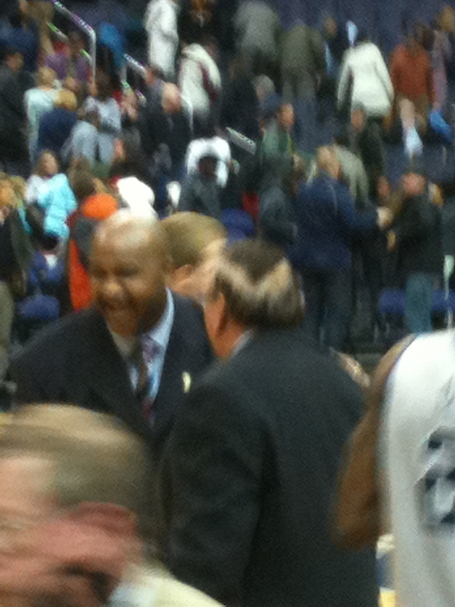 Ditto Award:
Did the St. John's athletic department not watch any of Lavin's games at UCLA before hiring him? His teams are built strictly on emotion and when things are going well, they play great but the moment shots stop dropping, all hell breaks loose and they end the game with damn near 3 intentional fouls. For the X and O fans, however, we have to salute Lav for running the full UCLA high post offense and even calling it UCLA - we applaud all tributes to the Wizard of Westwood

The Award for People who are Utterly Screwed in Philadelphia Award:
People on the CasualHoya Bus. Hahahahahahha. You are getting on a bus filled with Four Loko and (eventually) vomit, to see the Georgetown Hoyas go on the road against a team that was just humiliated in Providence, Rhode Island. Remember that time we won at the Wachovia Center? Yeah. Jeff Green was awesome. That's why HE IS IN THE NBA. Who are counting on now? John Caprio? The Hoyas are going to get their Twitter accounts put in hats and handed right back to them on Saturday. This blog is not being rude about that. We will be there too. But oh boy, we are going to get drunk beforehand because we know how it is going to end.

That's the Way the Cookie Crumbles Award:
St. Johns. The insightful eyes of this blog noticed that a lot of St John's shots seemed to be bouncing in and out of the rim. Hard luck pals. And so we went to the box scores. St John's shot 42 percent when they beat us at MSG. Last night: 34 percent (from three just 27 percent). At the same time, the Hoyas shooting jumped from 44 percent to 52 percent and a TREMENDOUS 50 percent from three (compared from 23 percent at MSG). So here is the very imporant theory about basketball that is the conclusion of this award: the team that shoots better wins. No shit. We shot better last night. Hoya Saxa.

Who's That Guy Award:
Jason Clark, a member of the vaunted Hoya Trinity, returned from an injury that lasted all of 2011 to lead the Hoyas with 16 points on 5-5 shooting and 3-3 from three. What's that? He wasn't injured? Anyhoo, it was nice to have #21 back and shooting well.

Hate Em Or Love Em, The Underdog Is On Top Award:
Julian Vaughn has been getting a bad rap this year for not being Greg Monroe. Well Greg was the #7 pick in the NBA Draft, so that's kind of unfair. But Vaughn is putting together a very solid season, and last night was his most complete game. The Hoyas flourish when they establish JuJu inside because it makes the opposing defense respect when the ball goes inside. Vaughn rebounded, scored, and provided muscle on D while finally bolstered by another big man in the starting five. Also, it should be mentioned that he is a warrior, because his ankle is definitely banged up.

It's All About The Heart Award:
Georgetown played St. John's on January 3 and January 26, a mere 23 day gap. In those 23 days, did they become that much better at basketball to turn a 3 point loss into a 25 point win? No. They just played with that big old thing we like to call HEART. Defense and rebounding come down to effort, and the Hoyas gave that in spades last night.

Revenge Tour 2011 Award:
We all remember the Revenge Tour 2010 through the Big East tournament. The Hoyas avenged losses to South Florida, Syracuse and Marquette in dominant fashion. Last night in the press conference afterwards, Chris Wright said the team wanted to get revenge for the loss in MSG. That is great, and it's nice to see some fight in the boys. A word of advice - ACT LIKE EVERY TEAM YOU PLAY HAS ALREADY DEFEATED YOU FROM HERE ON OUT. If the Hoyas show up in Philly with one of those horrific efforts again, all hell will break loose.

That's What Is Called A Winning Streak Award:
Don't look now, but the Georgetown Hoyas have quietly won three straight games while Syracuse and Villanova are losing to Seton Hall and Providence, respectively. Want to know the last time the Hoyas won three straight Big East regular season games? 2007-2008. Let that sink in for a second, and then marvel at the wildly inconsistent play that defined 2008-2009 and 2009-2010.

Austin Freeman Four Point Play Award:
Austin Freeman had another one last night, for his 80th of the season. Wait, that seems high. Anyways, those four pointers are really cool.

The Anti Cavaliers Homeless Announcer Award:
Remember that heartwarming story about the homeless dude with the golden voice getting an announcing gig with the Cavs? Well this award goes to the barking homeless dude sitting in the middle of Grand Central today. Very unsettling after a 45 minute subway ride.

Light Switch Award:
This blog. Many complained that we were too cynical? BAM. CURED. The new and improved all delusional blog is back, having purchased a CasualBus for a trip to the Final Four, and we will all sit and wait for the Positive Postgame Prognosis.

Jim Nantz Commenter of the Game Award:
This one goes out to Hoya Saxual for running with the biggest DC buzzworld since Snowmageddon:

it's not just snow...it's THUNDERSNOW!

Billy Crystal Award:
John Wall. We don't get a ton of celebs sitting courtside at Georgetown games so we have to give a shout out whenever possible. Jimmy was keeping it real casual on the baseline and obviously knows how to pick a winner.

Old Balls Award:
CasualHoya. Some of you may have noticed something missing on the blog this week. It seems one of the GLOBAL PHENOMENON'S editors has been wrapped up in some kind of basement-decorating, double-stuf-oreo eating conference which has prevented his incessant food commenting and general editorial dictatorial musings. Casual we hardly knew ye! Things seem to be running a lot smoother without him, both on and off the court. The Sum is Greater than the Missing Part Award.  Kudos to us! 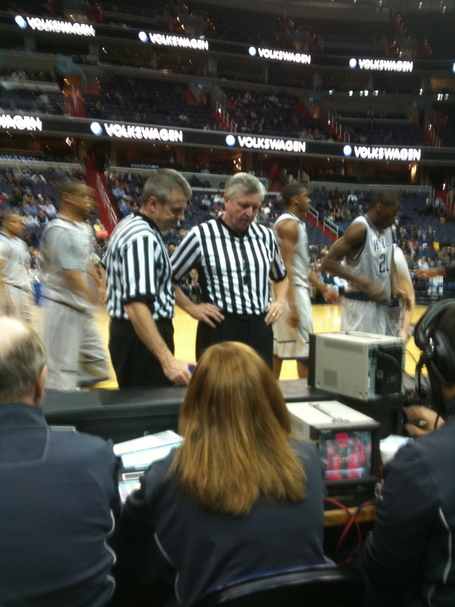 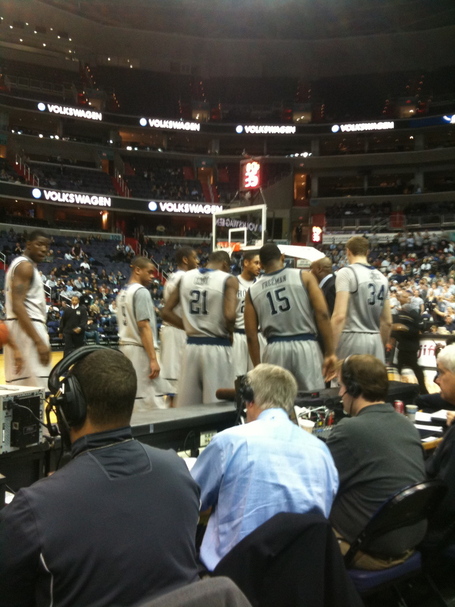 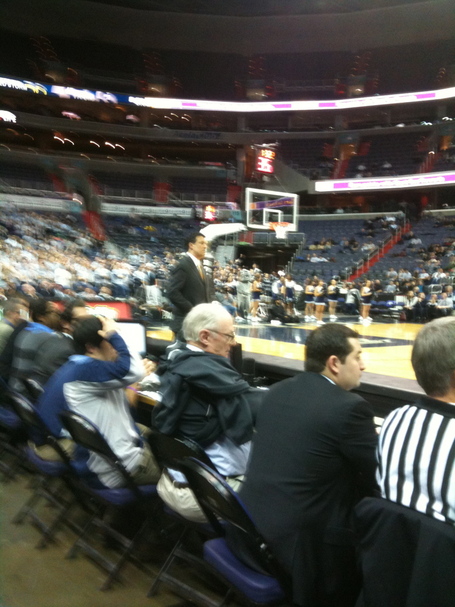 The Georgetown Hoyas are a streaking, nationally ranked powerhouse.