Sleeping With The Enemy: The Pirates of Seton Hall

Share All sharing options for: Sleeping With The Enemy: The Pirates of Seton Hall

Don't look now, but your Georgetown Hoyas are on a winning streak!  And before the Hoyas extend that streak to TWO with a win over Seton Hall, we here at THE GLOBAL PHENOMENON are bringing you everything you need to know about Georgetown's next opponent.  Special thanks to the peeps at South Orange Juice, the authority on all things Seton Hall, for providing answers to our always intriguing questions.  Gentlemen, this Bud Light is for you. 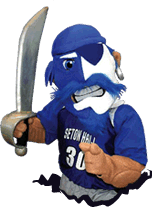 Hide your beauties and sprogs. Arrgh! (You too can talk like a pirate!)

If you haven't noticed, Georgetown is in a bit of a "slump", which is another way of saying we are flushing our season down the toilet, and I am not handling it very well.  I guess what I'm asking is how do you deal with rooting for a team that hasn't had the chance to compete for the Big East title in a while?

It's pretty easy, actually.  You set expectations low and look forward to beating up on Rutgers twice, Providence, USF and DePaul.  Anything extra is just playing with house money.

Speaking of competing for a Big East title, when is it realistic that Seton Hall rises up to the top of the conference again?

That's a bit tough to say.  Obviously, it begins with recruiting and fellow-area coaches Lavin and Rice have a running head start over Kevin Willard.  Seton Hall opened up an international pipeline to the Canarias Basketball Academy, but the book is still out on the quality of BIG EAST talent they're going to be able to produce.  Freshman Patrik Auda (CBA) has shown he's got some basketball IQ, but the hype of a smooth left handed, 3PT-shooting (27%) big, hasn't exactly shown up in South Orange.  Auda averaged 15MPG/3.1PTS/2.6REB in 14 games, before missing the last four with injury.  Big man Aaron Geramipoor (CBA), was sidelined with mono for much of the season, but officially burned his redshirt playing against Syracuse last week.  It's unfair to judge him after just three games, but since we will anyways, thus far, he's nothing more than a body to spell Pope or Robinson as they log their 35+ MPG.   I think you've got to give a coach three-or-four years, hopefully seeing progress along the way, but as far as top of the conference?  I wouldn't expect it in the next five years.

When I say Bobby Gonzalez, what words come to mind for you?

Other than 'man-purse?' Gonzo-Ball-Dot-Com.  I loved that domain name.

Obviously, there has been a ton of drama surrounding Seton Hall this year with Herb Pope's illness and Jeremy Hazell's robbery, how disconcerting is this as a fan?

We've become accustomed to turmoil during Gonzo's reign, but the two events in question were pretty much out of the control of the players involved.  Last year, that wasn't the case.  Lawrence drove down the parkway in the wrong direction.  Bobby Gonzalez installed a revolving door on his doghouse.  Pope punched a player in the nuts.  Three times in two different games.  Then the Robert Mitchell dismissal/robbery and finally Bobby's firing.  Disconcerting?  Last season was a nightmare.  If nothing else, Seton Hall ushered in a breath of fresh air with the Willard regime, but losing and the failure to land the local recruit will quickly pollute said air.

On a scale of 1-10, how happy were you when Kevin Willard was hired?  How happy are you now?

He wasn't my first choice and I'm fairly confident that he wasn't the first choice of many.  Still, I was and still am open to giving him a chance to bring in his players to run his system as designed.  I'm very happy with what's he's done for this team defensively, but the lack of any kind of offensive output not named Jeremy Hazell sort of outweighs the efficiency on the defensive end.

The Villanova roster currently consists of a number of NY/NJ guards.  Do you see Wright as a threat on the recruiting trail or does Seton Hall target different types of players?  With Wright hanging around the scene, along with the hirings of Steve Lavin at St. John's and Mike Rice at Rutgers, are you more concerned about future recruiting for Seton Hall?

I am a stud basketball player coming out of St. Patrick's.  Pitch me on why I should go to Seton Hall instead of Rutgers, St. John's or Villanova.

Immediate opportunity to become an impact player, in your first year.  Between Rutgers and SJU's monster classes coming in, good luck standing out among them.  And as a freshman at Villanova?  You'll likely wait even longer.  It's possible Hazell, Pope and Robinson will all be gone next season, leaving Jordan Theodore in his senior year, a sophomore who will be looked to carry the team in Fuquan Edwin and everything else is pretty much a crap shoot.  Seton Hall may not get the national exposure of St. John's or Villanova, but it's not like they aren't seen.  They're often carried by SNY, ESPNU and will have the occasional ESPN/ESPN2 games, so contrary to popular belief, it is possible to come to Seton Hall and stand out.  More so than at the other local school's who have much deeper rosters.  That's my pitch anyway, would it work?  Not likely.

Fill in the blank.  If Seton Hall finishes in [insert number] place this season in the Big East, I will be happy.

9th.  It would tell me that the team fought (not literally) throughout conference play in a season where they weren't playing for much of anything other than building their NIT-resume.

It's Friday night in South Orange, where am I going to drink some beers and meet some ladies?

C'mon Hoya, you asked me this question last year.  I'm sure I told you Cryans or the Mexican bar, which I believe was called Toro Loko.  It'd be cool if they changed their name to Four Loko.  Anyway, I've been away from South Orange and thankfully, the state of New Jersey, for the last 3.5 years so I can't help you out.  Though I don't think you can be helped with the latter.

Who does Seton Hall consider their biggest rival in basketball?

There's only two teams in the conference that are unlucky enough to call New Jersey home, so it has to be Rutgers.  Annually, it was the only game we'd pre-game for by playing beer pong at 8AM.  It's great for the rivalry that Rice and Gonzalez were both thrown out in the same year.  The results on the floor haven't been great, but Rutgers looks like they'll be turned around soon enough.

He only has 16REB in his last 2 games, so I think it's safe that he will not.  If we consider Jeff Robinson's rebounding output in addition to Pope's, we might be looking at over 30.  But that wasn't what you asked.  So I'm sure you don't care. (Casual note: You're right.)

Who are the team's best scorers and rebounders?  How glad are you to have Hazell back?

The best and sometimes only scorer, is Jeremy Hazell.  Herb Pope is the best rebounder.  Of course, Jeff Robinson could have been right there with him if he didn't spend the entire non-conference around the perimeter trying to convince NBA scouts that he's the second coming of Reggie Miller.

Seton Hall played NJIT earlier in the season.  I have no further questions.

Good, I'd rather watch the Golden Globes than answer these mundane questions.  NJIT is a product of Bobby's scheduling.  That said, I don't expect them to be gone next year, every school needs cupcakes and Seton Hall is in no position to turn away gifts from the bakery.

If Georgetown loses to Rutgers or Seton Hall, it is safe to say our season is completely over.  Are you willing to force that pain on us?

Season completely over?  They'd be teetering around #24-#25 or be on the first-tier of first-teams (back) in.  I'd gladly change places with you.  But since that's not a possibility, I'd love for the Pirates to inflict that pain on the Hoya fanbase.

Predict how this game plays out.  What is the final score?