The Casual Awards: Sending Out An S.O.S.

Share All sharing options for: The Casual Awards: Sending Out An S.O.S. 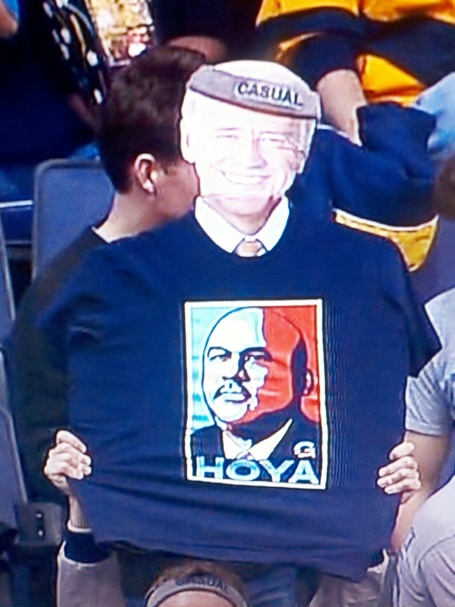 The Chris Wright Heart of a Champion Award:
Jason Clark. On yet another afternoon when Austin Freeman and Chris Wright did their best Harry Houdini impersonations, Clark kept the Hoyas in the game with 16 points on 70% shooting from the field. There's no reason for me to mention that Clark seemed to have bathed his hands in butter on the final four possessions of the game because that wouldn't be productive. Honorable mention: Markel Starks. Starks was extremely effective in his eight minutes, chipping in with 5 points and was very disruptive on the defensive end. There's no reason for me to question why he only played eight minutes because that wouldn't be productive.

The Chris Webber Award:
John Thompson III for calling the Timeout Heard 'Round The World. I have seen a lot of basketball in my life and I still cannot fathom one reason why JT3 elected to call a timeout with Verizon finally rocking after the Hoyas were on a 10-2 run, down one, and streaking up the court on a 4 on 3 advantage after a Julian Vaughn block. The timeout was so baffling that Doris Burke spent a good five minutes talking about how nonsensical it was, and even the people putting together the ESPN play by play couldn't bring themselves to include it. The timeout might have made sense IF IT WERE CALLED BY BOB HUGGINS. Just a horrible, deplorable, gamechanging momentum-killing decision, made even worse after the horrendous turnover coming off the 'designed play' after the timeout. Kill me now. 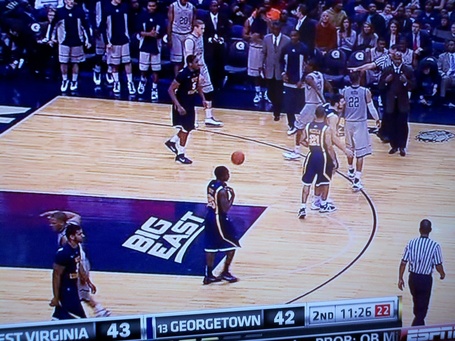 Maybe The Intern Who Came Up With The First Bob Cousy Award List Was Right All Along Award:
When the Bob Cousy Award nominees were announced last month Georgetown fans made a big stink that Chris Wright's name wasn't included. As StPetersburgHoya aptly points out, through four games in Big East play, these are Wright's stats: 12-43 (27.9%) from the field, 2-21 (.095%) for 3, 1.5 rebounds per game, 19 assists, 13 turnovers, 35.5 minutes per game.

Shake Weight Shake Up Award:
The starting lineup has to change. This season is starting to reek something nasty of 2008-2009. Anyone remember that starting lineup? Chris Wright, Austin Freeman, Jessie Sapp, DaJuan Summers and Greg Monroe. Three guys 6'3" and under and an out of position power forward. Sounds eerily familiar. The one difference? We actually have capable guys coming off the bench this year, and not Nikita Mescheriakov. Start Wright, Freeman, Hollis Thompson, Nate Lubick and Julian Vaughn and let Jason Clark come off the bench.
Randy Moss Questionable Effort Award:
The Georgetown Hoyas. There were at least four different times that we didn't box out on second free throws, allowing West Virginia second chances when they never should have. There is nothing more pathetic on a basketball court than allowing offensive rebounds off missed free throws, just shameful.
The Jim Nantz Comment of the Game Award:

Ashton Kutcher King Of Twitter Award:
The Georgetown Hoyas. It is becoming very tiresome reading their reactions to perceived slights after every single game. Guess what fellas? You play college basketball at one of the most prominent universities in the country. When you suck, people are going to say you suck. Instead of scouring the internet looking for negative quotes, maybe take a few more three pointers in McDonough. 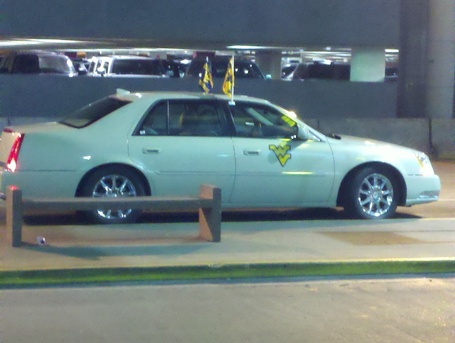 Is there any more room on that bandwagon?

Rex Ryan Foot Fetish Award:
What's the deal with foot fetishes? Is it really possible to get so worked up over someone's feet? I just don't see what all the fuss is about, but maybe I'm missing something. This one goes to Austin Freeman for stepping out of bounds trying to reel in Jason Clark's horrific pass with under a minute to go that essentially put the final nail in the Hoyas coffin. Nice win for the Jets, by the way.

Village Bicycle Everyone Gets A Ride Award:
Georgetown's defense. It's an opposing swingman's playground. Are you a middle-of-the-road college basketball player looking to have a career night? Come on down to the Verizon Center, roll off screens, and have wide open looks at threes, it is that easy. We might as well rename the phonebooth "The Career High Center".
The Jay Bilas Award:
Doris Burke. Burke seems to have her share of naysayers, but I think she does an excellent job. Her commentary during the game was spot-on and incisive, particularly regarding Georgetown's weakness inside and Chris Wright's lack of control hurting the team.

Document Your Brunch Award:
These early 11am starts are good for something! Leggo my damn Eggo! 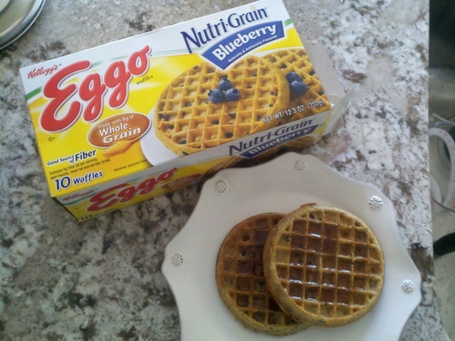 Who's Your Daddy Award:
Bob Huggins owns John Thompson III. Since 2008-2009, Georgetown has now lost four straight games, and hasn't won a game against The Tracksuit Man in Barack Obama's presidency. That is not change to believe in.
Willy Wonka Golden Ticket Award:
The only highlight for folks in Section 118 was when the ENORMOUS man showed up to sit right next to me, just after I just hung up with a friend who complained he lost his ticket outside the arena. The guy was the biggest human being I have ever encountered, but was gracious enough to move to a different section after realizing that section 118 stands for the entire game and he was blocking 6 rows of people behind him.

Georgetown Fan Award for Being a Loser:
Teddy - the kid who lost the ball under cup TV timeout promotion by choosing #2, despite everyone in the crowd telling him to pick #3. To be clear, this award is not aimed at Teddy, rather Teddy's choice to be a Georgetown fan. You will never win wearing blue and gray, my friend, NEVER. Luckily for Teddy, he is young enough to change team affiliations and salvage the rest of his life.

John Cahill Award for Terrible Officiating:
John Cahill. That ball was clearly off the West Virginia defender's foot, not Jason Clark's, yet you galloped around like a prized pony before making the wrong call. It didn't cost Georgetown the game, since they turned it over again when they got the ball back, but you look like a clown when you make exaggerated and flamboyant motions AND get the call wrong. The game is not about you, make the call and move on.

The Trying to Be Something You're Not Award:
Certain WVU Fans. Couldn't help but notice some Mountaineer fans walking around in yellow and blue shirts that just said "MORGANTOWN" on the front. Morgantown? Is that the name of the prestigious university and the athletic program you support? No, it's the town where that Meth-lab of a junior college is located. Nice try. But you can't fool us.

'Varsity Blues' Award
It's easy to blame Thompson and the egregious timeout but it's the players who have to make things happen. I damn sure can't put a finger on it but it's time for them to take control of the team - whether it's the Varsity Blues style late night run to the strip club or a team meeting where they identify problems rather than have a kumbaya circle, they need to own the team.

Too Soon? Award
We finally have to ask the question whether Austin's performance is related to his diabetes (which means it's fixable). The Preseason Big East Player of the Year, who's been putting up just over 18 ppg had ZERO POINTS in the first half of the game. His comments after the game about him needing to show up are FUCKING SPOT ON. Wholly inexplicable.

'Shit My Dad Says' Award
Remember that one Twitter feed that was pretty funny at first but became fairly annoying? We've commented on this one before but it's time to put up or shut up and this is aimed directly at Chris Wright who told us that the last few games haven't been vintage him. When you're at your best, you're distributing the ball, attacking the basket when available, and hitting open 3s NOT BEING THE FUCKING WRECKING BALL. Your intensity and desire to win aren't in question but as the point guard on a team whose offense is predicated on passing, you can't talk bullshit about how you're about to play better and then choke. And yes, we're angry and WE'RE CURSING.

Iron Horse Award for Being Awesome Post-Game Bar:
Sorry Irish Channel - you are officially off the list forever. Despite an alarming trend that I am alway drowning sorrows rather than celebrating victory at the establishment, Iron Horse is by far the best downtown bar. Yes, they hung a West Virginia Alumni banner outside, but they would do the same for us if we had a banner or wanted to advertise where to find the losers of every game. Fado is an excellent Saturday morning pre-game place as well.

Hoyasincebirth Positivity Award:
The out of conference schedule certainly did not prepare us for conference play but at least it gives us the luxury of going .500 in conference and making the tournament. Yup, that's right folks, I'm now aiming for 9 wins.

Sign of the Season Award:
One play in my mind exemplified the season. After going back and forth twice with Casey Mitchell with three pointers, Austin Freeman had a chance to take the lead after a Jason Clark steal but fired a HORRIBLE off-balance fade-away three pointer from the top of the three point line. It was an atrocious play and decision and after a Kevin Jones three Georgetown never tied the game again.

European Vacation Award:
To have a nice European vacation, you need to spend 10 days. The length of European vacation has turned Georgetown's season upside down. Good news is we still have 14 Big East games to play, and if we beat Pittsburgh, there are three winnable games on deck after that. Does that seem believable right now? Absolutely not, but neither was starting 1-3 in conference play. The college basketball season has its ups and downs, but this is absolutely salvageable.
Verizon Center Concourse Documentation Award:
There is an urban legend surrounding lordnick that revolves around the Hoyas playing better once he leaves his seat to wander throughout the Verizon concourse. The legend was born during last season's epic comeback against UConn where lordnick spent the entire 2nd half in the men's bathroom as the Hoyas put together the greatest comeback in school history. As lordnick sauntered through the concourse on Saturday after the Hoyas fell behind at halftime, Georgetown went on a big run to capture the lead for the first time, only to squander it for good once lordnick returned to his seat. The lesson, as always, is for lordnick to stop going to games. 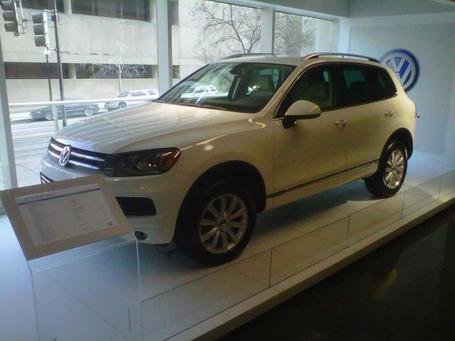 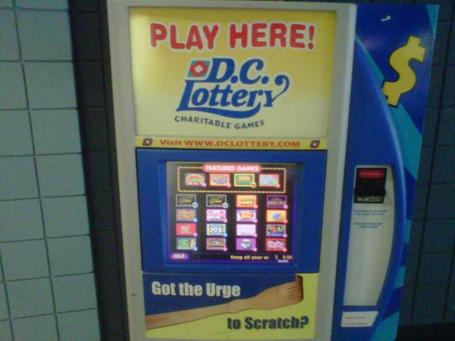 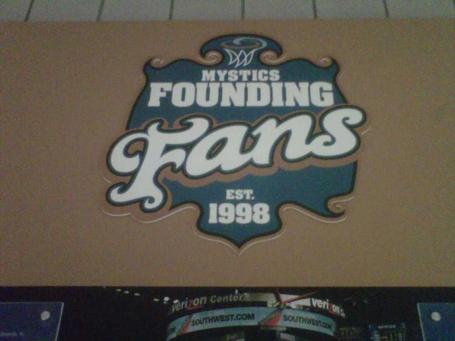 i neva did like "the hoya" paper on campus....every article was negative and @thehoyasports is proving me right as we speak...

Gratuitous Picture of Ashley Greene Award:
Oh, to one day be that wall.