After three long months of travelling the globe and documenting headbands in the most casual of places, the moment has arrived for our readers to square off against each other in the first ever Casual Summer Headband Series Tournament.  THIS IS THE FIRST CASUAL SUMMER HEADBAND SERIES TOURNAMENT IN THE HISTORY OF THE UNIVERSE, SO PAY ATTENTION.

We have ranked and seeded the sixteen entries, based on KenPom ratings of course, and now it is up to you, loyal reader, to determine the champion.  As heroically stated months ago, the winner will receive a free night of boozing, which may or may not be a box of wine and four Solo cups.  Let the games begin: 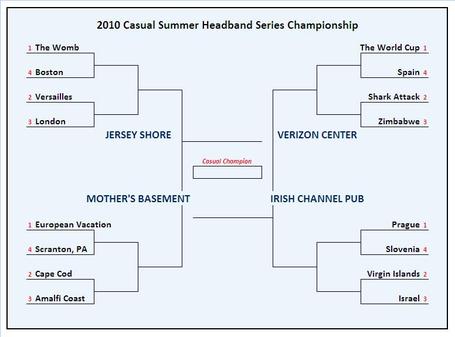 The bracket, as determined by a panel of Casual dignitaries (click to expand)

(Schedule and Entries after the Jump)

Each weekday morning, begininng next Tuesday, September 7th, we will post a matchup and ask you to vote on the best headband entry.  Polls open at 9am and close at 5pm.  We reserve the right to end any poll immediately if we deem there to be any type of voter fraud or wadetandy internet wizardry.  Yes, that is absolutely an idle threat.  Here is the schedule: