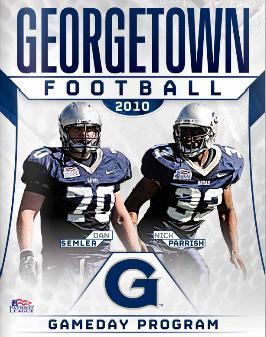 What has gotten into the Hoyas?!?!  After mounting an impressive 17-7 victory over conference foe Holy Cross at Harbin Field, Georgetown is sitting atop the Patriot League standings with a 2-0 conference mark, and 3-1 overall record.  Had it not been for a last second touchdown by Yale last weekend, Georgetown would boast an undefeated record and be primed for Rose Bowl glory.

This week's game was different from previous matches, as it was the Hoya defense that shined, limiting the Crusaders to only seven points and 262 total yards.  Georgetown QB Scott Darby excelled again, throwing for 191 yards and adding 98 on the ground.  He also completed passes to 12 different receivers.

This is the first time Georgetown has defeated Holy Cross, the reigning conference champion, as a member of the Patriot League.  Holy Cross had won the past ten meetings between the two teams, including the last five by double digit margins.

To be perfectly honest, Hoya football was a joke while I was on campus but the recent success of the team is incredibly exciting, even if we do not play in a big money BCS conference.  Kudos to Coach Kelly, his staff, and the Hoya football players for proving you do not need fancy-dancy facilities and full scholarships to succeed.  Hopefully this success will help the Athletic Department finally finish the Multi-Sport Facility and set a precedent for complete Hoya athletic domination.