Where I Come From: My All-Time Favorite Georgetown Hoyas Team

Share All sharing options for: Where I Come From: My All-Time Favorite Georgetown Hoyas Team

This post is sponsored by EA Sports NCAA Football 2011.

This is the 2nd of about 100 consecutive daily posts in which we will write about odd Georgetown basketball topics in order to promote EA Sports' NCAA Football 2011.  Yesterday we kicked off the series by telling you how Jim Boeheim's murdering of precious innocent dogs caused us to be Georgetown fans, and today we continue the series with a look at my personal favorite all-time Georgetown Hoyas squad, the 1996 Elite Eight team. 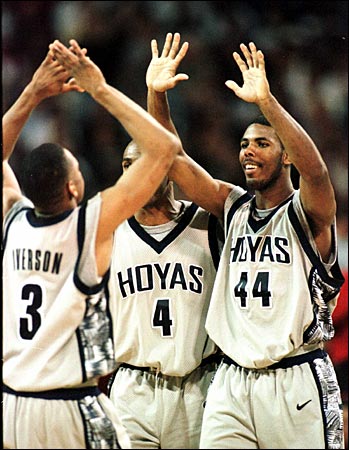 The reason I chose to attend Georgetown over Duke was because as a high school senior visiting the school for the 1st time I witnessed Allen Iverson, Jerome Williams, and Othella Harrington playing pick-up hoops against scrubs who looked just like me at Yates - and dunking all over them.  That was the only reason.

Joined the following fall by freshmen Victor Page, Joe Touomou, Daymond Jackson,  and Village C East 4th floor hero Dean Berry, my fellow freshmen and the rest of the student body took on a similar swagger as our on-court heroes, and whether it was a 50 point shellacking over a communist practice squad from Croatia at McDonough or a blowout win over a Big East rival at that horrendous USAir Arena in Landover, we went to every game and cheered our guts out.  We took the buses out to Maryland, drank Natural Ice in the back with our classmates, raced to be the first few in the door to get those precious seats up front in the student section, and hated Billy Packer with a passion after he called Iverson a "tough monkey" during a game aginst the hated Villanova Wildcats.

The high-flying Hoyas didn't just beat its opponents, they crushed them.  Iverson was the ringleader and when he wasn't taking over games single-handedly, he was feeding Page on the wing for titanic dunks or dishing it inside where with Othella, Jerome, Jahidi White, Boubacar Aw, and Ya Ya Dia gave the Hoyas a remarkable size advantage against its opponents.  The Hoyas finished with a 29-8 record and were 16-0 at home.

The seminal moment of that season occured when the then 11th ranked Hoyas faced the 3rd ranked UConn Huskies led by Ray "UConn has the wrong" Allen at USAir.  If you don't have 6 minutes to kill today before the epic Netherlands-Uruguay match to watch the entire clip, fastforward to the 4:15 mark.

The 1995-1996 Hoyas lost a crushing game in the Big East Championship to the same Huskies when Ray Allen hit a shot eerily similar to the shot that DeSean Butler hit to win the Big East for West Virginia this season.  That loss cost the Hoyas a 1 seed in the Dance (it went to UConn instead), and as a 2 seed Georgetown was placed in the same bracket as both UMass and Kentucky, two of the best teams in the country that season.

After a 37 point win against Mississippi Valley State, an 11 point sqeaker against New Mexico and an 8 point victory against the #3 seed Texas Tech (led by Jason Sasser and the backboard breaking Darvin Ham), the Hoyas were eventually eliminated by the #1 seed UMass with Marcus Camby, Carmelo Travieso, and Edgar Padilla and coached by John Calipari in the East Regional Semifinal in Atlanta.   Shockingly, UMass' win has since been vacated by the NCAA due to numerous violations incurred by Calipari.  A few weeks later, Iverson became the first player in Georgetown history to leave to school early for the NBA.

The Hoyas were an up-tempo, fast-paced, frenetic machine, laced with swagger and didn't give a shit about how badly they beat their opponents.  They were the 1995-1996 Georgetown Hoyas.  And they were the greatest.

The floor is open in the comments below. I'd love to hear your own thoughts and memories related to the 1995-96 Hoyas, or feel free instead to discuss some of your other all-time favorite Georgetown teams, and why they meant something to you as a fan.