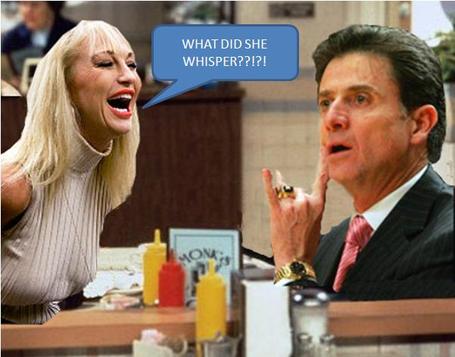 We have had our eyes glued to the Kentucky Sports Radio twitter feed in the ongoing Rick Pitino extortion trial taking place in Kentucky, and yesterday we learned the following:

Pitino said he bought Sypher a drink and the two exchanged small talk after the restaurant closed.

When he got up to leave, Pitino said she whispered something, opened his pants and the two then had sex "very briefly."

And then, today's action:

Well, well, well.  What could it have possibly been that Ms. Sypher whispered into the head coach of men's basketball at Louisville's ear that suddenly turned a casual drink into a marathon after-hours romp?

Tell us!  The winner as judged by the Casual Hoya staff receives a free order of contaminated Verizon Center chicken strips at a distinctly non-conference game this season.