Well it's been a while since I've done one of these.  I'd say email me questions, but they'd probably be stale by the time I write another edition in October.  For now, we'll jump right in.  As always, these are actual questions posed by other members of the Casual Hoya staff that I pretend are loyal readers. 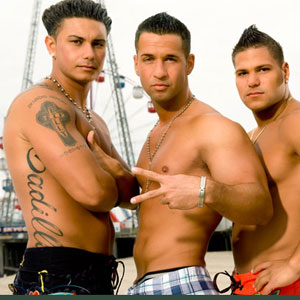 I'm going to be having a baby soon and need to select a name. Child's sex remains a mystery so I'll need boy and girl names. We're looking to avoid apostrophes in the name but I encourage creativity overall.  My Boys Swim, DC

I think naming a boy Levi would be strong, especially considering the virtuoso performance Levi Johnston has put on the last few weeks.  Not only did he impregnate Sarah Palin's daughter while in high school, he then trashed Palin, posed for Playgirl, then somehow got engaged to his baby mama, and announced it to the world in US Weekly.  Levi is good.

For a girl, it still has to be Snooki.  Speaking of which, we'll be LIVEBLOGGING THE JERSEY SHORE PREMIERE TONIGHT.

If somehow it turns out to be a combination of a shark and an octopus, you should name it Sharktopus.

You've got questions, we've got answers, after The Jump

Hypothetically, if you were married and going to have an affair, would a restaurant table be your first choice on location?  Rick, Louisville

My gut reaction is no.  I'd also be worried about a woman who willingly performs oral sex on a lawyer to receive his services.  Talk about a service for a service, right?!  Amiright?!  I'd like to think there are much more sanitary places to commit such an unsanitary act.  Also, Rick Pitino is arguably the most famous man in Kentucky outside of Colonel Sanders, so maybe getting a hotel room would have been in his best interest.

What I love too is August is usually a great time for college coaches to get out on the recruiting trail.  Instead of spending time scouting, Pitino is defending himself in the court of law from allegations of rape, abortion, and using the remnants of a T-Bone steak as a sex toy.  I made that last one up.

Considering 12 of the final 15 are going to make the team, I think his chances are like 80%.  Initially I was surprised Jeff made it this far, but then I started thinking.  First, he's a great passer and can knock down the three - both of these are important in international play.  Second, he doesn't need a ton of shots to be happy.  On a team that will include Kevin Durant, Stephen Curry and Rudy Gay, this is a good quality to have.  Third, and most important, he is Kevin Durant's best friend, and because Durant is by far the best player on the team, my guess is Coach K will keep Jeff on the roster so KD feels comfortable in Europe.  Fourth, Jeff is a phenomenal chemistry guy, which derailed Team USA in 2004 and 2006 failures.  The US will always be the most talented team in international competition, but other countries have played together longer, and have much better chemistry.  Guys like Green, Kevin Love and Lamar Odom are versatile big guys that share the ball and get along with everyone.  That's why I think all three will end up making the team for the 2010 World Championships.

Given the plethora of word-enhancement features on today's modern computers, why do people still feel the need to CAPITALIZE words to add emphasis?  People can choose among bold, underline, fonts, colors and can even combine a few or all of the aforementioned options.  Why do they still feel required to type like a blind, angry and senile grandmother?  Dingleberry, DC

If you were LeBron James, what would you have done?  Sharktopus, Ocean

Delonte West's mom.  Ba doom ching!  I'll be here all week!  But in all seriousness, if I were LeBron, I would have picked Miami as well.  Granted, I wouldn't have done it the way he did, but I can't blame him for choosing Miami.  Have you seen the women that live in that city?  And no state tax?  And 90 degree weather all year round?  And getting to play with two of your best friends?  Did I mention the women?

I also get winded running a mile, so the idea of working extra hard to win a title in Cleveland makes no sense to me.  From a legacy perspective, he should have went to New York though.  Nothing would have done more for his basketball legacy than putting New York basketball back on the map.  If Chris Paul somehow ends up there, could you imagine that lineup?  CP3, LeBron and Amare Stoudemire in Mike D'Antoni's offense would have put up about 160 points a game.  Alas.

Will Austin Freeman and Chris Wright get drafted this year?  Jack, Georgetown

Yes, both of them will.  I think both will work themselves into late first round, early second round draft picks.  I think the Hoyas have a great chance to win the Big East this year.  The talent that left the conference is staggering, both Freeman and Wright should be 1st Team All Big East, and with a deep run in the tournament they will be fringe first round picks.  For some reason, NBA scouts don't believe they are great athletes, probably because of the methodical nature of the offense, but both will test very well in the combine, and are more explosive athletes than Jeff Green, Roy Hibbert and Greg Monroe.

Well that's all folks.  Not sure if I mentioned this before, but WE'RE LIVEBLOGGING THE JERSEY SHORE PREMIERE TONIGHT.