David Frost had Richard Nixon.  Katie Couric had Sarah Palin.  Jim Rome had Jim Everett.  All journalists have a defining interview, the one encounter that determines their legacies and ranking among the media elite.  Will this be that moment for the Global Phenomenon?  Will this be the driving force that brings us blog supremacy, the impetus that allows us to move out of our mothers' basements and buy that coveted, yet expensive, second pair of sweatpants?

Last month PhillyHoya made reference to a Georgetown alum who part-timed as a professional eater.  Our ears perked up, to say the least, upon this admission.  After a casual introduction, we had the chance to electronically sit down with "Nasty" Nate Biller, a 2004 Georgetown graduate who is ranked #19 in the world by Major League Eating. 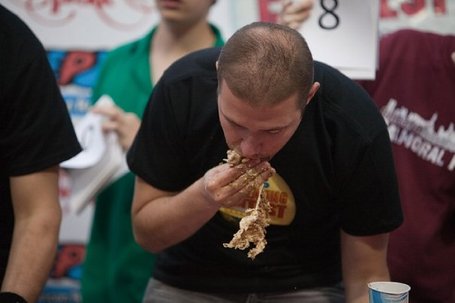 So as the Nathan's Famous Hot Dog Eating Contest nears, we thought this would be a grand opportunity to introduce Nate and grill him (haha get it? grill him, because he is a professional eater, get it?) on the ins and outs of professional eating and what it felt like to eat 2.675 pounds of funnel cake in 10 minutes.

When did you realize that competitive eating was your calling in life?

I've always known that it was the thing I was best at, but didn't know there were any organized contests. After college I moved back to Texas and was told there would be a corndog contest at the state fair. I made sure I was there, and after beating Bo Bice and others to win the title I learned that a pro tamale-eating competition was upcoming. After finishing in 5th place and beating several pros, I was encouraged to attend multiple events on the circuit and have been eating professionally ever since.

How did attending Georgetown prepare you for a career in competitive eating?

My time at Georgetown taught me that there are some really talented people in the world. It pushed me to find what I was best at and work to make myself even better. It also gave me numerous opportunities to fill my stomach with whatever liquidy substance happened to be available at the time.

It looks like you've won $3,050 in competitive eating. What have you bought with that money? Gastric-bypass surgery? Nachos?

Believe it or not, I don't always get my trip expenses paid for when I travel to contests. I usually use my prize money to try and break even. That being said, all my disposable income goes towards laxatives and booze. The #19 ranking in the world is worth more than any prize money.

New South and Darnall were the dining halls in my day. I would always eat nothing but turkey sandwiches - 8 turkey sandwiches on white with lettuce, tomatoes, peppers, and mustard a good eater do make. Chipotle was often a supplemental stop for gorging as well.

When I was at Georgetown I knew a guy who always claimed he could eat 100 strips of bacon in one sitting. We never tested that theory. Could you do that?

What is the situation as far as chicks on the competitive eating circuit? And not that lady who can eat 500 oysters. I mean, you know, ladies who enjoy the company of competitive eaters.

We certainly have "groupies" on the circuit, but they can range from very smashable to grotesque. I would say my profession certainly helps attract women, but also repulses some.

What is your hot dog eating technique? Please remember this is a PG-13 blog.

I've practiced eating hot dogs in every way conceivable. I've settled on a very simple technique of dunking hot dog and bun together in water, taking two bites, and swallowing. This works best for me but others have various ways they prefer to consume them. I also like to put condoms on them and see how far they go down my throat before I gag. (Casual Note: Blog's demise imminent) 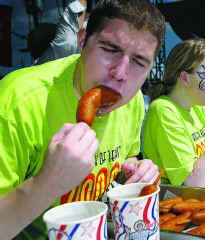 What would you say is your strongest food? Your weakest food? Is there a food you will never eat again?

I love, love, love, love, love mexican food. Contests with burritos, tamales, tacos, etc. I tend to dominate. That being said, I can't do spicy foods. I can barely eat 1 jalapeño, much less the 200+ that it would take to be competitive. Call it my kryptonite. The worst contest we ever had was pork rinds - by the end of the thing everyone had cuts all over their lips and the insides of their mouths. Needless to say we never had that contest again.

Will you accept a challenge from all the members of this blog for an eating competition? Could you eat more [insert food here] of all five writers of this blog?

I guarantee it and I never back down from a challenge! Name the the food and the place and I'll be there. It'd be nice if you could provide a T-shirt that reads "I out-ate 5 Casual Hoyas and all I got was this crappy T-shirt" as a victory prize. (Casual Note: Guess we'll suggest jalapeños).

I love both, but the side of ranch I get at Booeys to complement my roast beef and cheddar puts it over the top.

Can you eat two Chipotle burritos in a minute?

Hahahaha! Obviously you've never tried to eat 5+ lbs of food in 10 minutes after drinking beer have you? As one who has tried this, let me tell you that it's a bad idea. Despite what you may think, all illicit substances slow down your ability to hold mass quantities in your stomach.

What sort of mind games go on during the contest? Are you able to talk trash during the match?

They call me "Nasty" Nate for a reason. I do everything in my power during a contest to gag, spit, and snot in the direction of my opponents. They know when they're standing next to me that they're going to get messy and, possibly, infected. 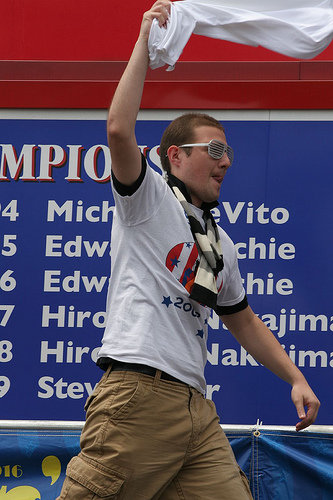 It's widely rumored that the clowns at the WSOP have side bets and also an agreement that the winner will split the pot with the others at the final table. Have there been any allegations of fixing eating competitions?

Never. Unlike poker, there is no way to help a fellow competitor that wouldn't be completely obvious to everyone watching. Also, those who are good know they're good and have no incentive to share their piece of the pie (pun intended) with anyone else.

HOW THE HELL IS IT POSSIBLE THAT A 150 POUND JAPANESE GUY CAN DOMINATE AMERICA IN EATING HOT DOGS? HAVE YOU SEEN OUR GENERAL POPULACE?

It is a proven fact that body weight has no correlation to stomach capacity. While it is true that those who eat hot dogs on a regular basis will most likely be obese, it doesn't mean they are the best eaters. I'm 6'0", 185 lbs and can outeat most every 300-pounder on the planet. Take that Rosie!

Please walk us through (1) a regular day of eating and (2) a training day meal.

I normally eat one giant meal every day. This can be in the afternoon or evening. This is my natural preference, but also keeps my stomach stretched. The weeks leading up to a competition I will do a full training run every other day. For hot dogs this consists of cooking 30 and pushing myself to eat as many as possible in 10 minutes. The off day I will use to chug 2 gallons of water and keep myself loose. I often find that my dixie wrecked.

Yes and no. I never eat because I'm unhappy because I'm always happy I get to eat - does that make sense? Although eating does make me unhappy sometimes. That's why God created vomit.

WILL YOU ACCEPT A SPONSORSHIP DEAL WITH CASUALHOYA.COM TO WEAR A CASUAL HEADBAND AT THE REST OF YOUR COMPETITIVE EATING EVENTS? 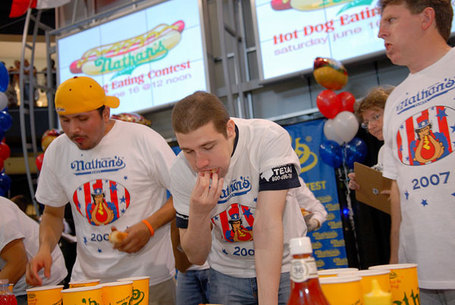