This post is sponsored by Labatt Blue, who invites you to visit RefreshmentDuo.com, where you can enter to win a ticket for you and a friend to attend a massive concert and party with the Refreshment Duo and Blue Light girls.

When Labatt Blue Light asked to sponsor a post about a pair of Hoyas who stand out as magnificently as the Blue Light Refreshment Duo, we didn't have to think very long about who would make for appropriate honorees: Julian Vaughn and Henry Sims.

Standout Duos after the Jump:

Like the Blue Light Refreshment Duo, they're inseparable, mesmerizing, and-of course, fake superheroes. And like their successes on the basketball court and fake crimefighting off of it, among Hoyas fans their names will be forever intertwined... and revered. 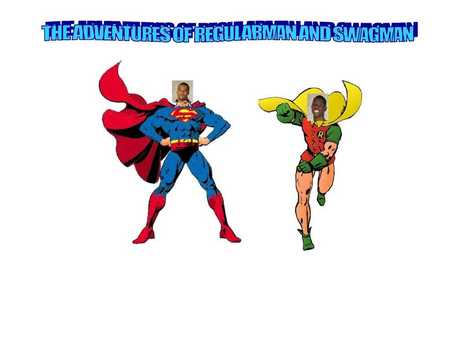 It's hard to imagine where Georgetown and THE GLOBAL PHENOMENON would have been this offseason without Vaughn and Sims.  An otherwise forgettable spring was highlighted by the legendary and heroic efforts of #swagman and #regularman, and we followed with rapt attention as they roamed the terrifying campus and the crime-ridden streets of Georgetown, saving young Hoyas from injury, persecution, and egads, another awful night at the Rhino Pumphouse.

As basketball players, they were excellent individually, but they were brilliant as a pair.

As far as standout duos,  Julian Vaughn and Henry Sims are as good as it gets.

And if you'd like us to promote your product, be $ure to let us know!  We are also available for weddings, sweet 16 parties, and bar-mitzvahs.