Last week we introduced you to The Contest that is quickly taking over the world.

As Casualites vacation this summer to whereabouts both near and far, we asked them to bring along a Casual Headband and document their travels.  Bouyed by the promise of a free night of partying at the expense of THE GLOBAL PHENOMENON, the response thus far has been overwhelming.  Every Friday this summer we will reveal an entry, and the massive contest to determine the ultimate winner will be held around Labor Day. 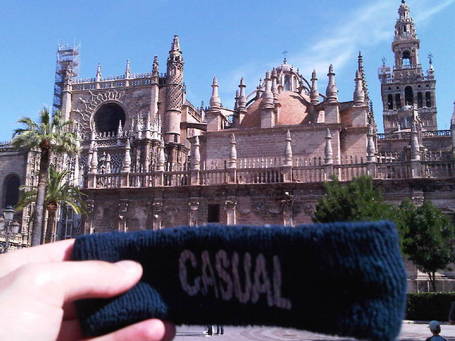 The word for Casual in Spanish is also Casual

The Cathedral of Seville is a religious building in Seville, Andalusia, southern Spain: it is the largest Gothic cathedral and the third-largest church in the world.  It is also known as Catedral de Santa María de la Sede (Cathedral of Saint Mary of the See)

Keeping it Casual in Spain after the jump: 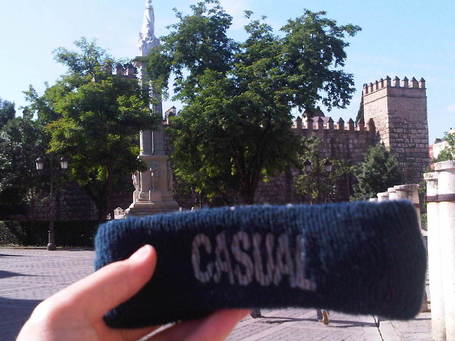 The Alcázar of Seville (Spanish "Alcázares Reales de Sevilla" or "Royal Alcazars of Seville") is a royal palace in Seville, Spain, originally a Moorish fort.

The Almohades were the first to build a palace, which was called Al-Muwarak, on the site of the modern day Alcázar. The palace is one of the best remaining examples of mudéjar architecture. Subsequent monarchs have added their own additions to the Alcázar. The upper levels of the Alcázar are still used by the royal family as the official Seville residence and are administered by the Patrimonio Nacional.

The name, meaning "The Courtyard of the Maidens", refers to the legend that the Moors demanded 100 virgins every year as tribute from Christian kingdoms in Iberia. The story of the tribute may have been used as a myth to bolster the Reconquista movement, but it may have had some truth to it in the sexual abuse of Christian women by powerful Moors.

CasualHoya.com: Teaching You Stuff since 2009.