Georgetown Headline That Will Make You Sh!t Your Pants

Share All sharing options for: Georgetown Headline That Will Make You Sh!t Your Pants

This will undoubtedly be the slowest week for Georgetown-related news.  The season is over, the draft is over, Kenner League starts in a week and there is NOTHING to read, write or discuss.  Until I came across the following headline from The Washington Post: 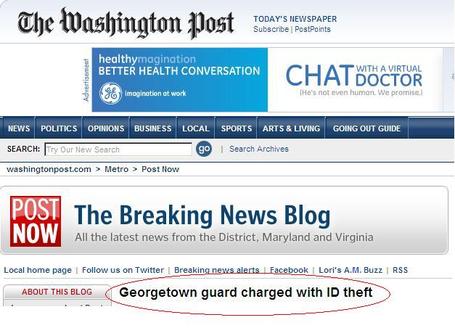 I am not ashamed to admit that this headline inspired an awful, yet remarkable, combination of gut-wrenching vomit, hopeless tears and unbridled defecation.  Luckily, I read the rest of the article before assuming the fetal position in a pool of my own excrement.

A security guard has been charged with stealing the identities of more than 200 people to make hundreds of fraudulent purchases, the Washington Examiner reports.

Dawn Marshall, who works as a security guard in the Georgetown area, as been charged with fraud, mail fraud, aggravated identity theft and conspiracy. She could face more than 30 years in prison, if convicted.

Marshall, along with a 48-year-old woman who has yet to be charged, are accused of stealing the identities to open fraudulent lines of credit for themselves and others. Investigators say they searched Marshall's home and found a stack of credit card statements that were sent to her address, but listed various people as the card holder.

Thank the heavens, this has nothing to do with basketball.  Backcourt intact.  Crisis averted.  We are not UConn.  Hoya Saxa.