Share All sharing options for: Casual Headband Summer Series: Keeping it Casual at The World Cup!

We hold these truths to be self-evident, that the World Cup is awesome, Casual headbands are amazing, and  lordnick and CasualHoya are unpatriotic, soccer-hating bums.

Last month we introduced you to The Contest that is quickly taking over the world.  Here is this week's entry, from Cape Town, South Africa. 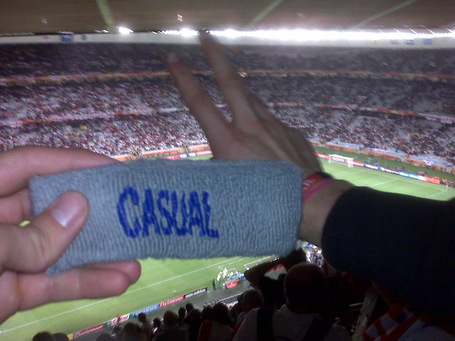 The game might have ended in a 0-0 draw, but that did not stop these Casualites from enjoying the sights and sounds of the greatest global sporting event of all-time.  To those excited, inspired and patriotically awaiting the start of tomorrow's USA v. Ghana match, do not be discouraged by the select few on this blog that take joy in belittling the beautiful game, just know that they are old, fat and unathletic.  The GLOBAL PHENOMENON enjoys all things GLOBAL and PHENOMENAL.

(More from South Africa After the Jump) 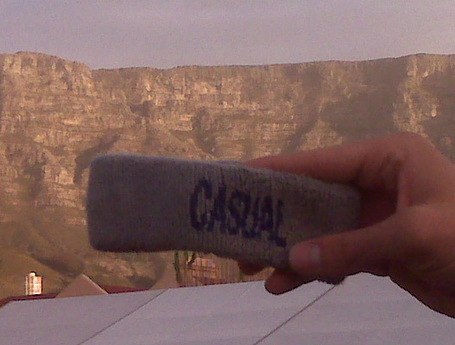 This is probably old news to most, but for those that do not know, Table Mountain is a flat-topped mountain forming a prominent landmark overlooking the city of Cape Town in South Africa, and is featured in the flag of Cape Town and other local government insignia.  The highest point on Table Mountain is towards the eastern end of the plateau and is marked by Maclear's Beacon, a stone cairn built in 1865 by Sir Thomas Maclear for trigonometrical survey. It is 1,086 metres (3,563 ft) above sea level, about 19 metres (62 ft) higher than the cable station at the western end of the plateau.  There are a variety of flora and fauna on the mountain, including rich Cape fynbos and dassies.

In other news, Wikipedia is a great resource for all your future 5th grade project needs.