Taylor King Gets Bounced From Villanova

Share All sharing options for: Taylor King Gets Bounced From Villanova

Taylor King has been kicked off Villanova, per various reports.

The school said in a statement Monday that King, who still has two years of eligibility left, plans to remain at Villanova to complete his degree requirements.

King transferred to Villanova in the summer of 2008 after one year at Duke. A McDonald's All-American at Mater Dei High School in Santa Ana, Calif., King sat out the 2008-09 season as a transfer student and then played in 32 games for the Wildcats in 2009-10, averaging 7.4 points, 5.3 rebounds and 19.0 minutes per game. A solid 3-point shooter, he knocked down 36.4 percent from beyond the arc.

King, who was a constant target of mockery for this site, will be missed dearly.  Not so much by Villanova fans, but by fans who yearn for goofy white dudes who think they are much better than they are. 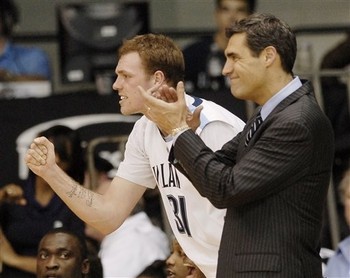 In happier times with Jay Wright

After the Jump, we list some possible reasons for King's dismissal.