Per Bull Dawg Junction, longtime Mississippi State assistant coach Robert Kirby will be leaving Starkville to join JT3 at Georgetown.  Kirby has spent 16 years at Mississippi State over two stints (1989-93 and 1998-2010), and has also coached at Houston, Southeastern Louisiana and Arkansas-Little Rock. 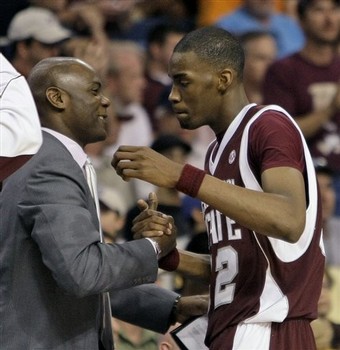 Kirby’s absence will leave a void in regards to coaching the big guys in the post, but the most significant impact will be noticed in recruiting.  Kirby is known for being a relentless recruiter, bringing in such names as Mario Austin and Renardo .

The hiring of Kirby is good news on numerous fronts for Georgetown, as the Hoyas now have one of the most respected veteran coaches in the nation to replace David Cox, and one that will hopefully open recruiting doors to the South.

More on Kirby after The Jump:

One such recruit is Mississippi native Johnny O'Bryant, ranked by rivals as the 3rd best PF in the Class of 2011.  Georgetown is high on the big man's list, despite being late to offer him a scholarship. He is also drawing interest from Harvard, a good sign as Georgetown's academic reputation could further entice O'Bryant.

Here's what ESPN has to say about O'Bryant:

O'Bryant's game isn't always pretty, but this blue-collar beast is fun to watch. He has a great motor at both ends and was easily the best rebounder in attendance. He attacks the glass with a chock full of ferocity and he never stops until the whistle blows. Once he snags the rebound on the defensive end he loves to fill the lane where he can throw it down with authority. Although most of his game translates into power, he does have a respectable jump shot out to the elbow. On the other hand, his post game is still in its infantile stage as he has a tendency to bring the ball down far too often. In addition, his pivot work is still a bit sloppy where he gets off balance while finishing. However, due to his motor, impressive physique, and bounce, there is no reason to believe that he won't continue to be one of the elite-level post prospects for his class.

Kirby will be getting to work fast, as the date for coaches to hit the road and begin recruiting again is July 8th.