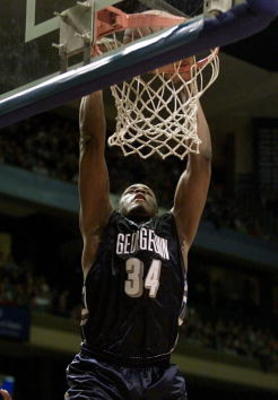 Last time we checked on Mike Sweetney, he was suiting up for the Erie Bayhawks in what must have been an XXXXL uniform.  A remarkable feat because a mere four days later primerahora.com posted a picture of the former Hoya big man playing for the Santurce Cangrejeros.  Accounts of both games relayed that Sweetney, despite being massive, was still incredibly skilled and polished - a talent that garnered the center Honorable Mention All-American honors while at Georgetown and the attention of the woeful New York Knicks during the 2003 NBA Draft.

(More on Mike After the Jump)

The Korean Basketball League or KBL is the professional basketball league of South Korea. Its inaugural season was in 1997. The season starts in October and ends in April the following year. The KBL consists of 10 teams. Each team plays 54 games (27 home games, 27 road games). Each team is allowed to have 2 foreign players. Foreign players in the league are almost always either a forward or center. Formerly, foreign players were not allowed to exceed 6 feet 8 inches, although that rule has since been revoked.

The league plans to announce final invitees on Friday, which I guess is today in Korea.  Based on my rudimentary 4th grade education, only 20 foreign players will be invited to participate in the league.

While we often use the phrase, "he's a good kid and I wish him the best," in vain on the Global Phenomenon, I actually do mean it when I say it about Big Mike.  It was fun watching him play while Esherick destroyed the program, one fist at a time, and it's a shame he couldn't maintain a career in the NBA.  Here's hoping he finds his way in Korea...