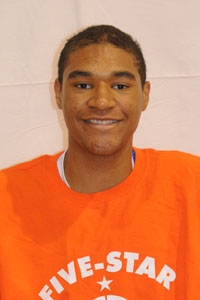 Adam Zagoria is reporting that 6'11'' center Malcolm Gilbert named the Hoyas as one of his top three choices.  Zagoria states:

Despite his offensive limitations, Gilbert, the No. 7 center in the Class of 2011, has drawn interest from Duke, Georgia Tech, Pittsburgh, Georgetown, Miami, Ohio State, Penn State, La Salle, St. Joe's, Penn, Harvard, Princeton, Cornell and others.

"I like Duke, Ohio State and Georgetown," said Gilbert, a rising senior at Academy of the New Church in Bryn Athyn, Pa.

More on Malcolm Gilbert after the Jump

Rivals ranks Gilbert as the 137th best player and 14th best center in the Class of 2011.  ESPN had the following to report:

Gilbert is a post player whose defense is far ahead of his offense at this stage in his career. He has very long arms and good timing which helps him block and change shots. He is not a very good defender on the perimeter at this stage because he does not have incredibly quick feet. Smaller, quicker posts blow by him, but he makes up for it with his length and good timing. When he catches in the post, he uses the spin move to try and score. He also likes to face up and has huge hands that help him catch good and bad passes. He does a good job of passing out of the double team from the post and likes to go over his left shoulder for his turnaround jump shot in the post.

Georgetown is definitely going after size in the 2011 and 2012 classes, as it is very guard-heavy right now.  Not sure if Gilbert's recruitment is a good, bad, or non-telling sign for our chances with the Class of 2011 big men.  There is no harm in getting our name out there with the other prospects from future classes, whether there is immediate playing time available or not.