The Casual Awards: Who Cares About Big East Expansion? We've Got USA v. England in the World Cup!

Share All sharing options for: The Casual Awards: Who Cares About Big East Expansion? We've Got USA v. England in the World Cup! 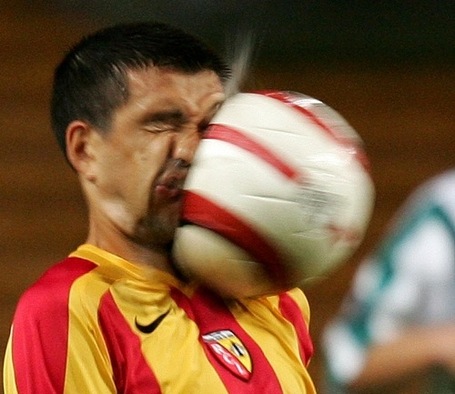 THE GLOBAL PHENOMENON has been taken over by soccer hooligans and World Cup apologists, all both of whom seem to enjoy the wonderful game featuring fast-kicking, low-scoring, and ties.  So while your regular heroes are taking the morning off to attempt to get that annoying sound of killer bees out of our ears, here are some Casual Awards for the USA-England match, courtesy of SirHoya and Rocktavius.  Take it away lads....

So, the MOST ANTICIPATED ANGLO-AMERICAN CLASH SINCE 1812 likewise ended with honors even. A blazing English start did not see the burning of the White House, but instead captain Steven Gerrard putting England ahead after four minutes - until a 40th minute howler from ‘keeper Green allowed a tame shot from Clint Dempsey to trickle in. And that's how things finished. Anyway, on with some gongs...

Rep. Anthony Weiner Memorial Goat of the Week Award
Hello, England here. Mind if we borrow a body part or two from one of your goalies? Not the whole chap, you understand - but Tim Howard's left nut could have done better with Dempsey's shot than did Mr. Green, who joined the proud ranks of England keepers making horrific blunders over the last decade. Promising start, undone by the inexplicable and ludicrous - welcome to the life of the 21st Century England fan.

Chris Wright Heart of a Champion Award
And it all started so promisingly. Gerrard has not always repeated his excellence in a Liverpool shirt when playing for the national team - but after a lackluster year for the Reds, he produced a dominant first-half for the Three Lions, sparked by a well-taken early goal tucked past Howard. May the captain's armband inspire many such future performances.

Tony Hayward Leadership by Example Award Sponsored by Beyond Petroleum (Not So Much, Actually)
Step forward, US skipper Carlos Bocanegra. Many of England's better moments (including the goal) came from the right, as the US left-back was caught out on pace and positioning.

Doing a Grey Out with FLAGS! Award
Coming into the game, much was made of the fact that the US would have more fans at the game than the allegedly soccer-crazy Brits. Whatever the actual split in the stadium, Englishmen and WAGs dominated with their wall-papering of the Royal Bafokeng with St. George flags bearing town and village names from the length and breadth of the septic sceptr'd isle.

#swagman "I Make This Look Good" Award
I honestly don't know his purpose during this tournament (ruled out of playing by injury), but La Beckham made the ever-so tasteful official England three-piece grey suit (complete with white stitched three-lions crest) a surefire best seller in Burtons and Top Mans all over England. It looked especially delicious when combined with the Becks Pout ‘n Glare, on display on more than one occasion.

Cartoons of My Childhood Coaches Award
To Dennis the Menace (UK version) and Skeletor, aka Capello and Bradley.

Georgetown Students vs Villanova (As Opposed to USF) Passionate Support Award
While being chauffeured along Rt-66 to my undisclosed viewing location out in deepest VA, I was heartened to see that someone had gone to the effort of hanging a sheet off one of the bridges over the highway letting me know that "US > UK". Which I'm inclined to agree with - Scotland, Wales and Northern Ireland do indeed drag down England's standing.

Mirth was provided on the way back home by some wag and his/her "Yanks Beat Wanks" installation on another bridge. Careful, though - too much of the former while doing the latter can lead to permanent damage, especially if lasting longer than four hours.

"Real Housewives" Guilty Pleasure Award
Methinks lordnick doth protest too much. Up at all hours to view and deliver his withering verdict on tie after glorious tie? You're clearly loving it, m'lud.

Algeria and Slovenia are neXt.