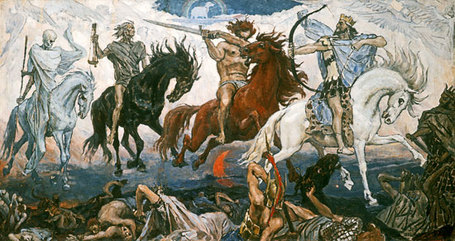 The End is Near

Conference expansion is doing exactly what some had predicted it would do - making a mockery out of collegiate athletics.  Loyalties are trampled, conferences are changing and rivalries are disintegrating, all in the pursuit of academia the greenback.  And our beloved Georgetown is stuck right in the middle of the whirlpool, unable to say or do anything because it lacks the voice only a top tier football program has.  So in an attempt to thoroughly confuse you, here are the headlines dominating conference expansion discussions, all of which are subject to change at any moment.

Report: Nebraska board agrees on Big Ten move - CBSSports.com
The Nebraska Board of Regents informally agreed Wednesday to leave the Big 12 for the Big Ten, Orangebloods.com is reporting. According to the site, an official announcement will come Friday, at which point Texas and five other Big 12 schools -- most likely Texas A&M, Texas Tech, Oklahoma, Oklahoma State and Colorado -- could begin the process of moving to the Pac-10.

Source: Colorado joining the Pac-10 - CBSSports.com
Colorado will announce Friday that it is leaving the Big 12 to join the Pac-10, a Big 12 source confirmed to CBSSports.com on Thursday. The Boulder Daily-Camera is reporting that Pac-10 officials will be on the Colorado campus for a formal press conference.

Sources: All signs point to Nebraska to Big Ten - ESPN
A Big 12 football coach, who spoke on the condition of anonymity, told ESPN.com's Mark Schlabach on Wednesday night that if Nebraska left the Big 12, the conference would dissolve, according to his athletic director and university president. The coach said Texas, Texas A&M, Texas Tech, Oklahoma, Oklahoma State and Colorado would join the Pac-10, leaving behind Baylor, Kansas, Kansas State, Missouri and Iowa State.

College football realignment: Roy Kramer, architect of BCS and SEC expansion talks to Gene Wojciechowski - ESPN
"If Nebraska goes it would be my understanding that Missouri would be not far behind," he said. If that happens, the Big Ten wouldn't stop there. "Then they would have to look to the East Coast," he said. "Rutgers. Maybe Syracuse. But if you take one or two teams from the Big East, then you'll see the SEC and the ACC expand. … If the Big East were to lose two, three teams, then you'd see other teams in that conference looking for other places to land."

Ballin' is a Habit: The Expansion Crisis 2010 Day 8: Updated as news comes in
A television station in Kansas City is now reporting that Texas and Texas A&M are headed to the Big Ten, Oklahoma is petitioning to join the SEC, and Oklahoma State will be joining the Pac-10. An earlier report from TMZ comfirmed Oklahoma State accepting an invite from the Pac-10. Texas and Texas A&M would be leaving Baylor and Texas Tech, as well as Missouri, to their own devices.

Kansas AD to resign - CBSSports.com
Kansas athletic director Lew Perkins will resign at the end of the 2010-11 school year, according to KUSports.com.

Self 'very concerned' for Kansas' future - Beyond the Arc - NBC Sports
"I'm not in panic mode yet, but I'm very concerned," [Bill] Self told SI.com's Luke Winn. "I believe that Kansas will be OK no matter what, but for us to continue to compete at the level where we've been competing, and recruit at that level, I really believe that we need to be aligned with a BCS conference. It would be very disappointing to me if a team that's won three national championships, and is one of the three winningest programs in college basketball, wouldn't be a part of a BCS conference. "I think there are a lot of Kansas alums out there right now that are very concerned, that the face of our athletic department and our university could be changing, in the next 72 hours, for the next 30 years."

Remaining Big 12 schools to the Big East gaining momentum | Washington Examiner
By the way C-USA members Memphis and Central Florida and working through back channels to gage the interest of the Big East in expanding. Meanwhile a 12 team Big East football conference and a 20 team super basketball conference would be a good move for the conference and one that is clearly being explored. Football wise there would be an Eastern Division with Pitt, West Virginia, UCONN, USF, Syracuse and Rutgers or UCF with a Western Division that could be made up of Kansas, Kansas State, Missouri, Iowa State or Memphis, Cincinnati and Louisville. They could hold a Big East Championship Game each year that could be rotated between New York, Washington, Tampa, St. Louis and Kansas City. The Big East basketball with the addition of Kansas and maybe Memphis would further enhance the best basketball conference in the country.

The Gettysburg Times > Sports
I can only hope that John Marinatto has seen "Falling Down". In fact, I'm hoping that Marinatto, the Big East Conference commissioner, has not only seen the movie but will take a cue from the 1993 flick in which Michael Douglas plays a man so frustrated with flaws in society that he took matters into his own hands one fateful day.

Ballin' is a Habit: The Expansion Crisis Day 9: Updated throughout the day
No news has broken yet today, but it will. Among other things, Nebraska is expected to announce that they have joined the Big Ten, we are still waiting to learn more about the rift between Texas and Texas A&M, the Big East was rumored to have been in Lawrence, KS, last night, and where will the Big Ten target next?